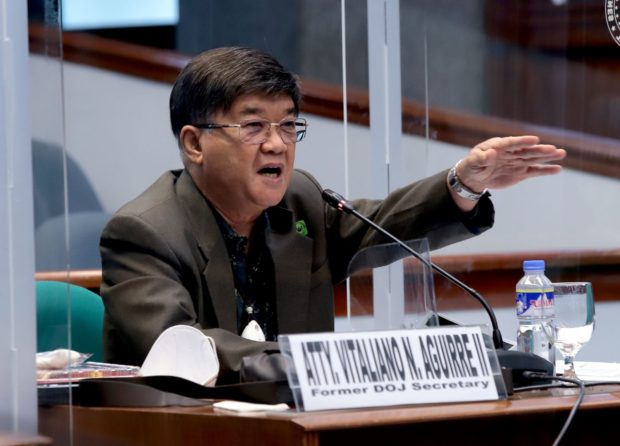 AGUIRRE TESTIFIES AT SENATE ‘PASTILLAS’ PROBE: Former Justice Secretary Vitaliano Aguirre II confirms to senators that he was the one who appointed former Bureau of Immigration (BI) deputy commissioner Marc Red Mariñas, during the hybrid hearing of the Senate Committee on Women, Children, Family Relations and Gender Equality, October 6, 2020, on the so-called pastillas scam. Aguirre said that he does not regret his decision to appoint Mariñas who had been tagged as one of the masterminds of the ‘pastillas’ scam, claiming that Mariñas is legally presumed innocent until proven guilty. (Albert Calvelo/ Senate PRIB)

MANILA, Philippines — Columnist Ramon Tulfo has been tagging former Justice Secretary Vitaliano Aguirre II as the “protector” of the “pastillas” racket in the Bureau of Immigration (BI). On Tuesday, he called the former Duterte Cabinet official the “godfather” of the notorious multi-billion-peso scheme.

During the Senate committee investigation into the anomaly, Tulfo claimed Aguirre issued a memorandum circular that supposedly prevented the BI commissioner from re-assigning and assigning personnel and instead let the former justice chief to designate people at the Ninoy Aquino International Airport.

(He is the one to assign the immigration personnel. This means that the officers involved in the scam cannot just be working on their own. There needs to be a tree, a godfather. The godfather is Aguirre.)

But Aguirre denied this and challenged Tulfo to release a copy of the alleged memorandum.

As both continued to trade insults, Aguirre renewed his challenge to the columnist to file cases if he can back it up with evidence.

(I can even accompany you to any police station. But I’m sure that your complaint will just be thrown in the trash because you have no evidence against him.)

In the same hearing, Senator Risa Hontiveros also raised questions on the fact a father-and-son previously led the BI Ports Operation Division (POD) and the Special Operations and Communications Unit.

She was referring to former POD chief Marc Red Mariñas, who was tagged as the leader of the racket, and his father Maynardo Mariñas.

But BI deputy commissioner Tobias Javier told the Senate committee that it was Commissioner Jaime Morente who appointed the older Mariñas to the position.

“This belies the declaration of Tulfo who, because of his lies against me, says that I was the one who appointed both the father and son,” Aguirre said.

“Itong si Tulfo proved nothing because of this personal vendetta against me,” the former justice chief added, even accusing the columnist of being scared since he was not physically present during the hearing.

Aguirre told the Senate panel that Tulfo is a “fugitive from justice” and that the latter has standing arrest warrants.

(Why is he not here despite his penchant for publicity.)

(He is scared to attend because he will be arrested by authorities. Why are you not here? Show us your fearlessness.)

In response, Tulfo explained he did not show up physically in the hearing because of the Senate’s new requirement for visitors to present a medical certificate.

(Your requirement is too stringent… Getting swab-tested hurts… But I really want to be there.)

Citing a “very reliable” and “unimpeachable” source, Tulfo also claimed that Aguirre and a group of lawyers have plotted to humiliate him in the Senate.

(Aguirre said I have a standing warrant of arrest. You know, they had the plan… to have me arrested in front of the Senate.)

(Right in front of the Senate…I will be handcuffed and will be brought to some station so that I would be humiliated.)

Read Next
Rainy Wednesday over eastern parts of Luzon due to LPA
EDITORS' PICK
New Year, New Rediscoveries
Acer Philippines welcomes you to its first flagship store
House inquiry on unilateral termination of UP-DND accord pushed
Gov’t mulls review of age restrictions by end-January or February — official
PHI and Primark vs. Premier, SM Investments Corporation and CAIL
Duterte not consulted on decision to end UP-DND accord, says Palace
MOST READ
Sotto chides Roque’s ‘war-like’ remark: You expect us to treat resource persons with TLC?
Plagued with ailments, ex-vegan finds ‘cure’ in carnivore diet
Woman, 21, shot in broad daylight in Cotabato town
Mom, GF of UK variant patient, and 9 others test positive for Covid-19
Don't miss out on the latest news and information.