‘Pastillas’ masterminds claim to have ‘contact’ in Ombudsman’s office — whistleblower

MANILA, Philippines — The masterminds behind the “pastillas” scheme are supposedly claiming to have alleged “contact” in the Office of the Ombudsman.

This was the testimony of a self-confessed member of the so-called “pastillas” group who surfaced at Tuesday’s resumption of the Senate inquiry into the multi-billion illegal racket.

During the hearing, Immigration Officer II Jeffrey Dale Ignacio tagged former deputy commissioner Marc Red Mariñas as one of the masterminds of the “pastillas” scam.

Mariñas was not present during the hearing but in an earlier inquiry, he claimed to have no knowledge of the modus wherein immigration officers allegedly extort money from Chinese nationals in exchange for a seamless entry into the Philippines.

The scam was first exposed during a Senate hearing in February, which eventually led to the National Bureau of Investigation (NBI) filing charges against 19 immigration officers.

Ignacio was among the 19 Bureau of Immigration (BI) officials earlier charged by the NBI with graft over the “pastillas” modus. 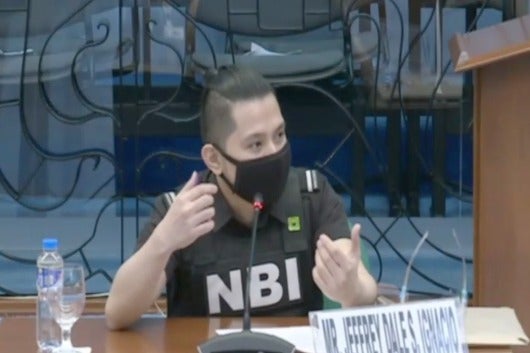 Immigration Officer II Jeffrey Dale Ignacio, a self-confessed member of the so-called “Pastillas” group, surfaces during the resumption of the Senate investigation into the multi-billion racket on Tuesday, October 6, 2020. Screengrab from Senate Youtube livestream

Ignacio further claimed that during one of the meetings he attended with other BI officials subpoenaed by the NBI, Mariñas had supposedly told them that “may contact sila sa Ombudsman” (they have a contact with the Office of the Ombudsman).

(Before the meeting, all of us were instructed by Sir Red that all of the things that will be discussed shall never be talked about outside.)

(I can remember Sir Red is saying that they have a contact in the Office of the Ombudsman.)

Ignacio also shared screenshots of text messages, including one from another immigration officer, Fahad Calaca, who said Mariñas would help come up with the P100,000 bribe needed to pay an NBI insider who could supposedly clear Ignacio and others of charges.

(We were told that each of us must prepare P100,000. I was having problems where to get this kind of money, but Sir Fahad Calaca said Sir Red will help out in paying for it.)

NBI legal assistance division Atty. Joshua Capiral, who allegedly accepted bribes in exchange for being excluded from charges, was arrested in an entrapment operation last September 21.

Hontiveros said Ignacio’s testimony not only identified the alleged masterminds behind the “pastillas” operations but also showed how Mariñas and his team tried to “obstruct justice and thwart accountability before this committee and before the court of law.”

Lawyer Emeterio Dongallo Jr., chief of the NBI Special Action Unit investigating the “pastillas” scam, said the bureau is looking into Ignacio’s testimony regarding the alleged “contact” in the Office of the Ombudsman.

(It was one of our interest because it has been exposed by Mr. Ignacio that their bosses are informing the team that they have contact with the Office of the Ombudsman.)