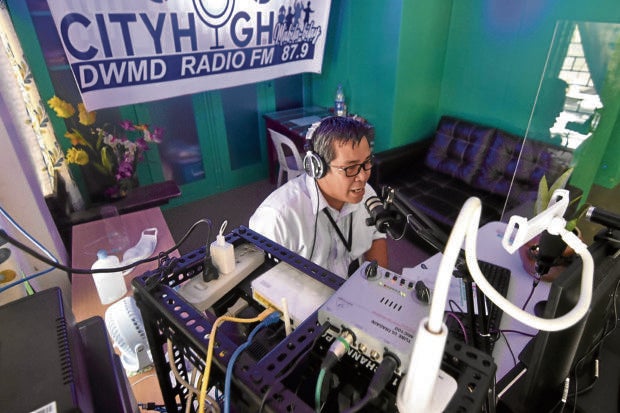 TEACHER DJ Junior high school teacher Jojill Beltran of Dagupan City National High School takes on the job of a disc jockey at the school’s Mabila-bilay radio station (dwMDFM87.9) to announce health protocols and schedule of classes and module distribution. The station will be tapped for blended learning during the school year that opened in the middle of theCOVID-19 pandemic. —WILLIE LOMIBAO

Julia Jossielh Cillador, 13, a Grade 8 student, woke up early on Monday and was ready to attend her class at Iloilo National High School before daybreak.

She wore her school uniform, went next door to her aunt’s house, opened a desktop computer and attended her classes.

“It’s something new and fun, and I tried to listen to what my teacher was saying despite some signal interruptions,” she told the Inquirer at her home in Pavia town, Iloilo province.

The classes, conducted through Google Meet, lasted five to seven hours. Julia’s mother, Jossie, observed the classes so she could familiarize herself with online learning.

According to Julia, she missed in-person classes where she could see and be with her friends and classmates. “She also misses having school allowance,” Jossie teased her daughter.

Lea Belleza, public information officer of the Department of Education (DepEd) in Western Visayas, said the first day of classes went smoothly in the region.

She said a common concern was the intermittent internet signal due to simultaneous use of students and teachers. “The series of orientation sessions for learners and their parents helped a lot,” she said.

In Eastern Visayas, parents and guardians trooped to schools to get the modules for their children. At Leyte National High School, the biggest in the region with 10,000 students, teachers were directed to stay at the school gates to distribute the modules to avoid the spread of the coronavirus.

In Negros Occidental, schools had distributed the written modules and given online instructions to parents and students even before classes opened, said Gemma Ledesma, DepEd director in Western Visayas.

In Tarlac City, a mission center run by the Catholic Church opened its doors to students who need a place and access to the internet for their online classes.

Caritas Tarlac Mission Center at Barangay San Luis is equipped with a Wi-Fi connection and offers lounges inside nipa huts for the children, said Fr. Randy Salunga, the center’s director.

In Cabanatuan City, 100 poor families received smart mobile phones donated by the police in time for the start of classes. Among the recipients was Remedios, 45, of Barangay Pula, who said the gadget would help her daughter cope with her online classes.

“It’s a struggle for us to provide for our children. I don’t have a job and my husband is sick. We can’t even afford a notebook,” she said.

In Bataan province, Russell Galicia, an elementary school teacher in Orani town, said they were still printing modules for the students since the copying machine given by the local government arrived only on Oct. 1. They were also accommodating late enrollees, some of whom registered only when classes opened on Monday, he said.

In Olongapo City, some students in public schools who were enrolled in online distance learning shifted to modular distance learning on the first day of classes, said Benedick Capling, a senior high school teacher. “The biggest factor for the shift is the internet connection. Some of my students have weak internet signals,” he said.

In Baguio City, parents have formed an informal “teaching academy” to augment their skills in supervising children enrolled in the new school term despite the pandemic.

The virtual academy, organized by the Federation of Parent-Teachers Associations in Baguio, has offered training webinars to explain the contents of grade school and high school workbooks for eight subjects.

In the Cordillera, 400,105 elementary and high school students receive lessons through 15-page module printouts and the teachers’ canned lectures distributed in flash drives, through free video platform YouTube, or via radio or television.In Palawan province, special education teachers in Coron town had to be creative in making distance learning work for their students when the DepEd failed to provide learning materials for children with physical impairment days before the schools opened.

“We grew worried when it was already just days before classes started and DepEd had not yet provided us modules. We asked other teachers from Laguna and other divisions (for help). They gave us ideas and shared modules,” said teacher Manuel Bacarac.

“We have agreed with this kind of learning setup in order for us to ensure quality education among pupils,” said Ryan Habitan Homan, the school principal.

In Calabarzon region, the DepEd said late enrollees would be accommodated until next month.

In the remotest areas, like island villages in Quezon province that are accessible by a 90-minute boat ride, the last batches of learning modules were distributed on Oct. 2, said DepEd regional director Wilfredo Cabral.

In Lanao del Norte province, teachers had to endure 30 to 45 minutes of travel through big waves to distribute self-learning modules to 260 students in the remote island village of Darumawang Bucana in Lala town.

“No boat could travel to the island during low tide. We always travel during high tide and avoid being stranded,” said teacher Rose Ann Bracero.