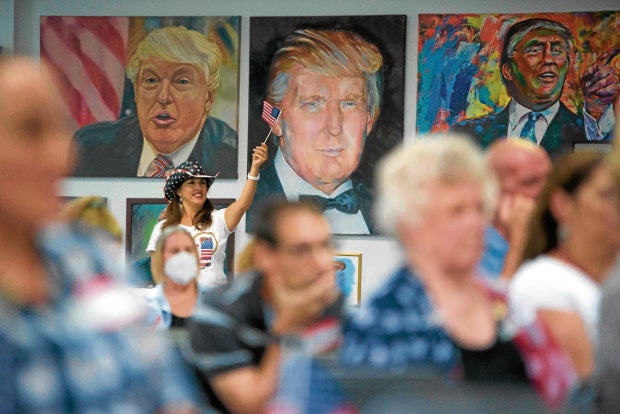 THE OTHER SIDE A woman waves an American flag as President Donald Trump’s supporters watch the presidential debate at the Trump Victory Campaign center in Katy, Texas, last Tuesday. —AFP

Asian American voters are “increasingly” leaning toward and identifying with the Democratic Party in the United States, according to US analysts.

But whether Filipino Americans are also voting blue is still up in the air as the analyst of Pew Research Center said there had been no in-depth study yet on their voting behavior.

The five US states with the largest Filipino population are California, Hawaii, Texas, Washington and Nevada.

“From our data, we see increasing shares of Asian Americans identifying with the Democratic Party over this period,” Dr. Bradley Jones, research associate at Pew Research Center, said during a briefing of the US Department of State Foreign Press Centers’ “Elections 2020: A Virtual Reporting Tour of the US and the American Electoral Process.”

In Jones’ PowerPoint presentation, which showed results of 25 years of phone surveys conducted by the center on registered voters, 53 percent of Asian Americans identified themselves with or leaned toward the Democrats in 1994, and their number jumped to 72 percent in 2018 and 2019.

“Asian Americans, a fast-growing segment of [the US] population, [are] increasing[ly] Democratic,” said Dr. Mark Rozell, dean of the Schar School of Policy and Government at George Mason University in Hopewell, Virginia.

In a separate briefing on the US virtual tour program, Rozell noted more Republicans from “the older generation” of Asian American immigrants who came to the United States in the 1960s and 1970s.

“Whether fair or not, that perception very strongly exists now,’’ he added, referring to the immigration policy adopted by the Trump administration.

According to the White House website, “The US must adopt an immigration system that serves the national interest. To restore the rule of law and secure our border, President Trump is committed to constructing a border wall and ensuring the swift removal of unlawful entrants. To protect American workers, the president supports ending chain migration, eliminating the Visa Lottery, and moving the country to a merit-based entry system. These reforms will advance the safety and prosperity of all Americans while helping new citizens assimilate and flourish.”

Rozell described the Democratic Party as a “coalition of minorities to some extent” as many different minority populations heavily identified with it. The minorities included Black, Latino and Asian Americans.

According to Rozell, the Latino population is “the fastest-growing segment of the American population.”

He said Democrat presidential nominee Joe Biden and his party were “concerned” about the Latino vote as recent polls showed that Trump had “picked up a few more percent of Latino vote better than how he performed in 2016.”

Asked about the Filipino American vote, Jones said the Pew Research Center “do not have the sample size to talk about subgroups within the Asian community.”

Jones said the center would want to conduct similar in-depth studies on Asian American voters, noting that just like the Hispanic vote, “the Asian vote is certainly not monolithic.”

“It includes a huge variety of different life experiences and different situations in the country,” he said.

Ruby Adonay-Clemmons, a longtime US resident who immigrated in the 1990s, is a Democrat, albeit not a card-bearing one, because “democratic principles’’ resonated with her, she told the Inquirer. She decided to become a US citizen “because of (former US Democrat President) Barack Obama.”

“I wasn’t ready to become an American and vote until Barack came along,” said Clemmons, who lives with her American husband and children in New Hampshire. She voted for Obama in 2008 because, she said, his party’s principles appealed to her.

“Because at my core, I always believe in a life that is all about shared responsibilities, about giving that extra lift or push to someone who is having a hard time and making sure that person will get a shot at life because the society allows him or her to get back up and do a restart … I believe it is everyone’s duty to take care of his or her neighbor,” Clemmons said.

She said she knew of other Filipinos on the US East Coast who share her sentiments.

“For the most part, I think Filipinos (especially my generation, Gen X) tend to embrace democratic ideals because we have so much experience living under an oppressive rule that mostly benefited the rich,” said Clemmons, who worked as a journalist in the Philippines before she moved to the United States.

Asked about Filipinos leaning toward the Republican Party, Clemmons said a lot of them were attracted to the anti-abortion stance of Trump. Many Filipinos are Catholics and abortion is frowned upon by the Catholic Church.

Maria Smith (not her real name), who also migrated to the United States in the 1990s and is now living in Texas with her husband, a retired US Marine officer, and her children, is voting for Trump. She explained that her vote in the past was “a combination of red and blue, depending on the candidates’ vision.”

She said she has many Filipino friends who have switched to the Republican Party, especially those who left New York, California and Illinois for Texas.

Asked whether Trump’s anti-immigration policy turns her off, Smith said she found “valid reason” for efforts of the current US administration to end chain migration or immigration to the United States based on family ties.

“There’s a scarcity of work here, and there’s truth that immigrants are struggling to find better jobs and tend to depend on social services which are running out of money,” Smith said.

She said she would vote for Trump on Nov. 3 even if she “hates” his character and “all the (recent) chaos” because “he still manages to deliver results that would normally take years’’ for a Democratic establishment to do.”