Tributaries of the Siffu River that zigzag through the town serve as crucial lifeblood for most villagers whose main source of livelihood comes from growing rice, corn and bananas.

From its headwaters in the towns of Barlig and Natonin, the river cuts through Ifugao province before draining into the Magat Dam in Ramon, Isabela province.

Roberto Ramos of Barangay Palitod says one can catch a carp (“burasi”) weighing up to 5 kilograms, especially when the water level rises at certain times of the year.

“In just a few hours of night spearfishing, you can have enough fish for three large family meals or so,” Ramos said.

As in most villages in this town, Palitod heeds local tradition and only allows fishing that uses homemade spear guns and employs hook-and-bait and cast nets. 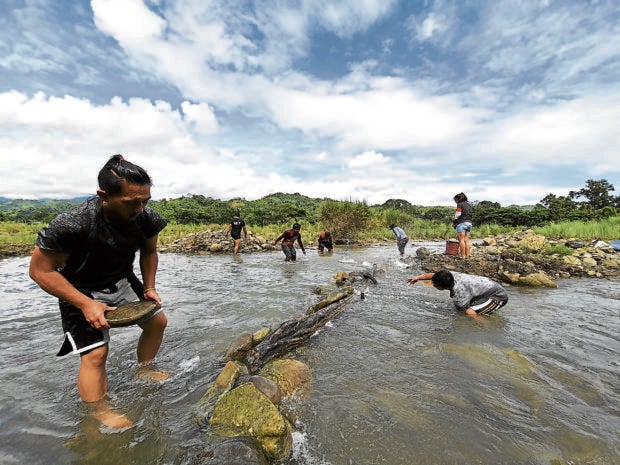 TRADITIONAL: An age-old fishing tradition, “sarup/sarep’ is a fishing practice which involves a number of persons to temporarily divert the river flow. (Photo by SHYRE UNGHIYON / Contributor)

Several villages practice a fishing tradition called “sarup,” which works when the water level is low enough to wade across the channel.

Sarup involves temporarily diverting river flow by slowly and skillfully stacking rocks as obstructions. As the water starts to recede, a funnel from the stockpile of rocks is built at the opposite end and a net is laid out at the narrow tip.

Freshwater fish, shrimps, eel (“dalit”) and crabs (“agama”) are trapped between the net and the barrier, and can be easily handpicked.

The rocks are later removed to restore the flow. To hasten the process, locals now use long strips of canvas over the rocks to divert water flow.

The traditional method is now seldom practiced because most villagers prefer spearfishing at night or casting nets, which is easier, according to Maceda Calunnag, a councilman of Barangay Bunot.

Regulating fishing activities through traditional methods might have just saved the fish population, which had declined a decade ago due to extensive fishing and illegal practices such as battery, or electrofishing, said Pio Gubia-on, Bunot chair. 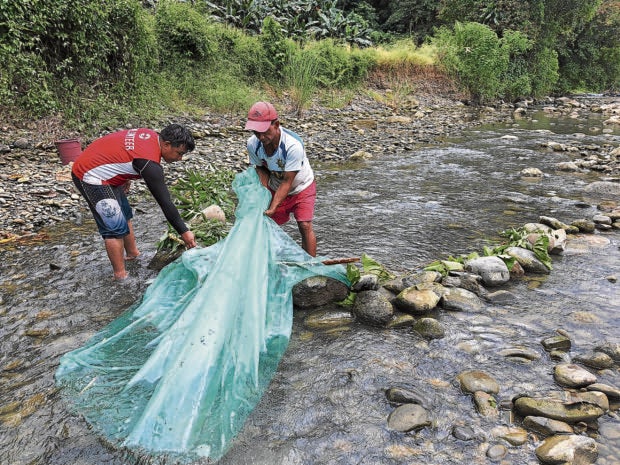 TRADITIONAL: An age-old fishing tradition, “sarup/sarep’ is a fishing practice which involves a number of persons to temporarily divert the river flow. (Photo courtesy of SHYRE UNGHIYON / Contributor)

The Bureau of Fisheries and Aquatic Resources (BFAR) has established hatchery technologies in the region to propagate these species and augment existing productions.

Renato Basilio Jr., a councilman, said local officials and “tanod” (watchmen) took turns in watching over the area to discourage any fishing activity, which often happens at night.

Violators have been caught and penalized for fishing within the forbidden zones or using illegal methods, Basilio said.

At certain times, however, the no-fish zone is left unguarded as the officials needed to tend to their day jobs. The minimal manpower for security thinned further when the coronavirus pandemic hit the country.

Data from the BFAR also list one more fish sanctuary in the Lower Amolong River, which is also part of the Siffu River. 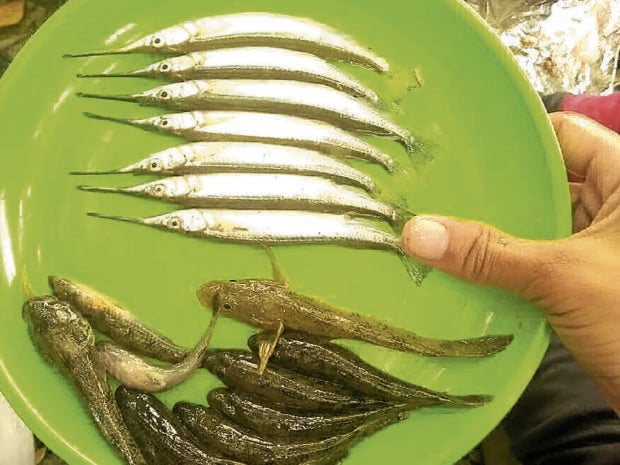 RIVER BOUNTY: Different species of goby and other fish, which are prized delicacies in urban areas, thrive in the Siffu River in Mountain Province. (Photo by RAM MAGLANGA / Contributor)

In October 2018, heavy rain brought by Typhoon “Rosita” triggered a landslide that buried a government building, killing 34 people at Barangay Banawel in Natonin. Three steel footbridges over the riverbanks in Palitod were also destroyed.

Since then, most people avoided fishing along the Siffu River, Ramos said. “Probably they were just scared a body might pop out or that the fish might have consumed human flesh,” he said.

The tragedy helped rejuvenate the river, Ramos said, but not enough to save several fish species which were already declining or rarely seen.

Basilio said the Department of Environment and Natural Resources and the BFAR could help restore fish population by reintroducing native species and hiring more people to help guard fish sanctuaries.

The Siffu River is part of Paracelis’ identity and lifestyle, he said, adding: “We are the stewards of our own river because it has sustained us and it will sustain our children’s children.”