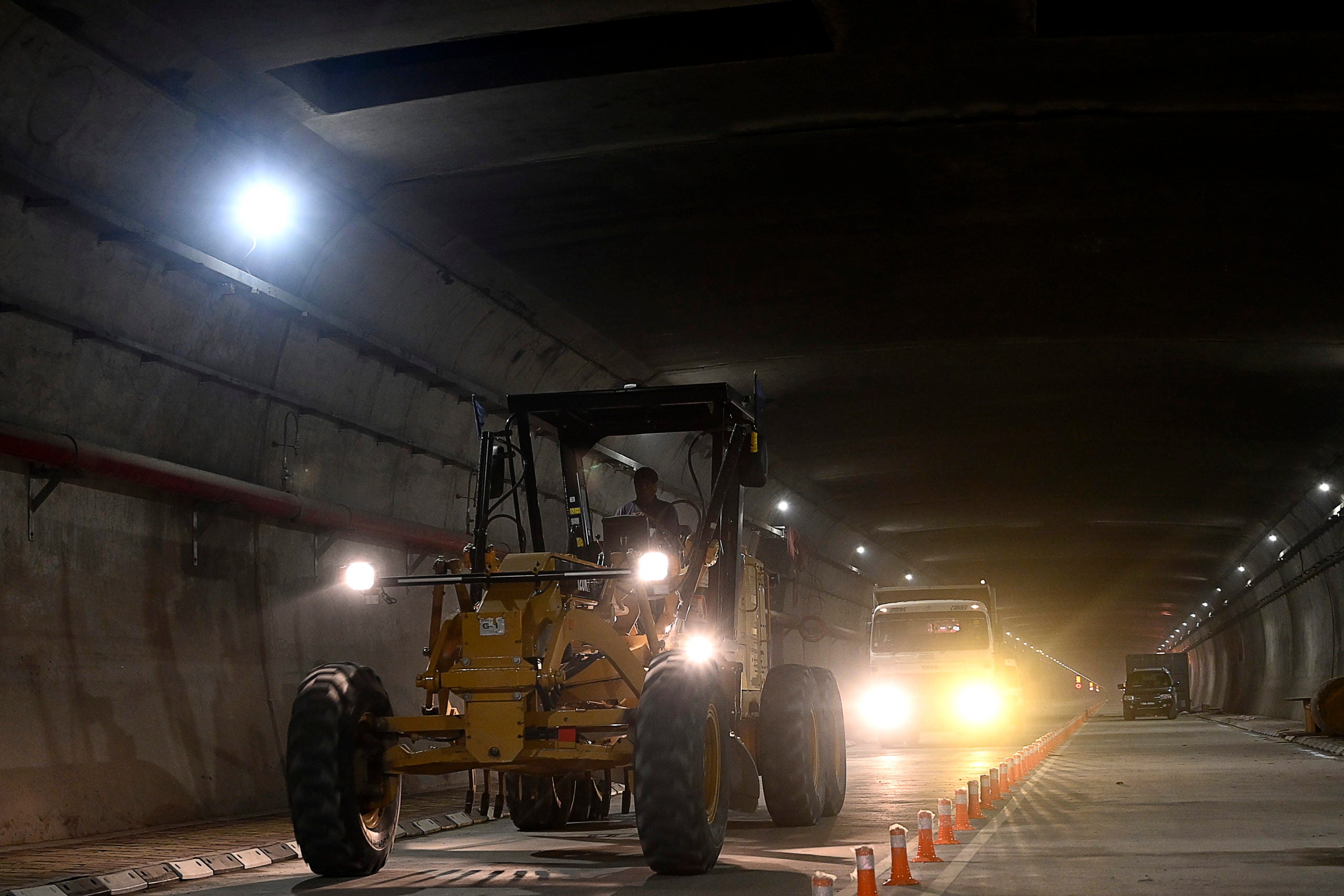 In this photograph taken on September 1, 2020, a construction vehicle moves inside the Atal Rohtang Tunnel near Solang in Himachal Pradesh state. – In India’s high north, a tunnel is near completion that will slash the time needed to rush troops to the Chinese border, part of a blitz on infrastructure — and much else besides — near the frontier as tensions run high. (Photo by Money SHARMA / AFP) / TO GO WITH ‘India-China-conflict-border-tunnel’, FOCUS by Bhuvan BAGGA

NEW DELHI — India’s Prime Minister Narendra Modi on Saturday opened a Himalayan tunnel that will drastically reduce the time needed to rush troops to the country’s remote Chinese border as tensions grow between the Asian neighbors.

The tunnel traverses India’s northern Himachal Pradesh state and lies on one of two main routes for troops headed to border areas in Ladakh.

Twenty Indian and an unspecified number of Chinese troops were killed in June during a deadly clash in Ladakh, which shares a disputed boundary with China’s restive Xinjiang and Tibet regions.

The two nuclear-armed countries have since rushed tens of thousands of additional troops and weapons to the area, and have been locked in a tense stand-off for months.

The $400-million, nine-kilometre (six miles) tunnel will cut the journey by about 50 kilometers (30 miles) and four hours, enabling travelers to bypass a tricky route across a landslide-prone Himalayan pass.

A decade in the making, freezing temperatures, and the challenging terrain meant construction work could only be carried out for about six months each year.

The project is part of New Delhi’s push to catch up with Chinese infrastructure development on the other side of the border.

“We have put our entire energy in developing our border infrastructure. The country hasn’t seen roads, bridges, and tunnels built at this scale,” the prime minister said after inaugurating the tunnel Saturday.

“Besides locals, this (infrastructure) will also hugely benefit the men and women in our army,” Modi added.

Sanjay Kundu, the police chief of Himachal Pradesh — which shares a long border with Tibet — recently proposed better roads and mobile connectivity as well as even arms training for the state’s border villages.

India’s Border Roads Organisation, which implements most of these strategic projects, says it has built more in the last four years than in the previous decade.

Its head, Lieutenant-General Harpal Singh, told AFP they were pressing ahead with “long-term plans based on their strategic calculations to develop these regions”.