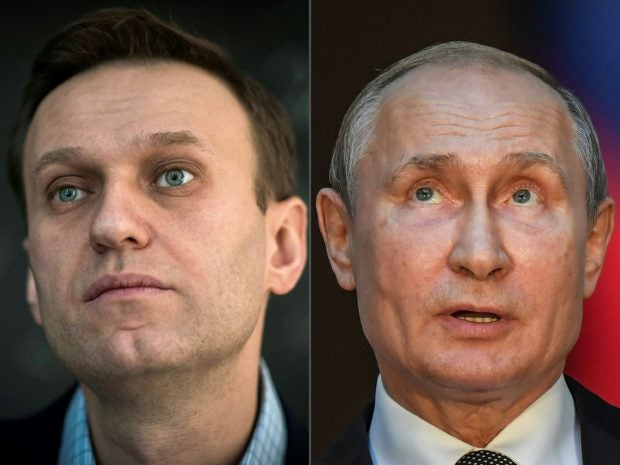 (COMBO) This combination of pictures created on October 1, 2020, shows Russian opposition leader Alexei Navalny (L, on January 16, 2018, in Moscow) and Russian President Vladimir Putin (on July 4, 2019, in Rome). – Russian opposition leader Alexei Navalny has accused President Vladimir Putin of being behind his poisoning, in his first interview published since he left the German hospital where he was treated. “I assert that Putin is behind this act, I don’t see any other explanation,” he told the German weekly Der Spiegel, which published extracts from the interview on its website Thursday, October 1, 2020. (Photos by Mladen ANTONOV and Tiziana FABI / AFP)

BERLIN — Kremlin critic Alexei Navalny has vowed to return to Russia as soon as he has fully recovered from his poisoning, saying he would not give President Vladimir Putin the pleasure of being in exile.

“Not returning would mean that Putin has achieved his aim. And my job now is to stay the guy who’s not afraid,” he told Spiegel weekly in his first media interview, published Thursday, since his collapse in August.

“I will not give Putin the gift of not returning to Russia,” he said, adding that his “task is to get fit as soon as possible so that I can go back”.

In the interview that lasted almost two hours, the 44-year-old gave harrowing details of his collapse on the flight from Tomsk to Moscow after he was poisoned by what the West said is the Soviet-era nerve agent Novichok.

He described telling the cabin crew that he had been poisoned before he fell on the floor.

“Then I heard voices that were getting softer, a woman calling: Don’t faint now! Then that was it. I knew I was dead. Only later did I realize that I was wrong.”

Despite his harrowing experience, he said he will press on with his activities when he returns to Russia.

“I will keep travelling through Russia’s regions, stay in hotels, and drink water that’s in the rooms. What I can do otherwise? One cannot do much to counter Putin’s invisible murderers.”

For now, he is staying in Berlin with his wife and son as he undergoes the long process of rehabilitation.

“I take walks in the park in the morning, that’s my tasks, then I do some exercises with my doctor, then in the evenings I walk again,” he said.

He has also begun juggling exercises, he said, “to improve coordination, so that the hands will move in the same direction as the eyes”.

Navalny was evacuated to Berlin for treatment after he collapsed in August while on the flight to Moscow after a campaign trip to support opposition candidates in local elections.

The Kremlin critic was discharged just over a week ago from the Berlin hospital where he has been receiving treatment.

Germany, which holds the presidency of the EU, has said toxicology tests show he was poisoned by the military-grade agent Novichok.

The Kremlin has firmly denied allegations of involvement and accused Western leaders of launching a disinformation campaign over the opposition leader’s illness.

Instead, it pointed to tests carried out by Russian doctors who first treated Navalny showing no toxic substances.

Read Next
California wildfires turn beloved Napa wine spots to ash
EDITORS' PICK
Climate Change Commission and Nestlé PH to discover sustainability-focused solutions
Gordon calls 2 Pharmally execs ‘Senate fugitives’ after no-show in probe
What’s at stake for every fighter at ONE: NextGen
NCR’s COVID-9 alert level may be downgraded from 3 to 2 soon — DOH
Legarda emphasizes role of ICC/IPs in nation building this IP month
Isko Moreno bares ‘two-pronged’ approach to rehabilitate MSMEs
MOST READ
LJ Reyes says Paolo Contis made ‘no efforts’ to talk to her after their split
Despite being called arrogant, Yang says he ‘loves’ PH and ‘loves doing business here’
PDP-Laban Cusi wing Senate bets willing to give way to Duterte
Drivers with no traffic violations can now renew licenses for 10 years
Don't miss out on the latest news and information.