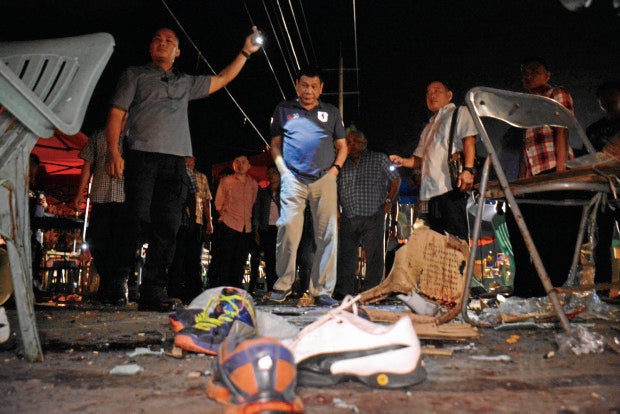 President Rodrigo Duterte visits the night market on Roxas Avenue in Davao City where 14 people were killed and 68 others injured after an explosion on Sept. 2, 2016, tore through what Davaoeños call their happy place. Photo from the Presidential Photographers Division

DAVAO CITY –– The local government here welcomed the conviction of seven of 16 persons accused of bombing a night market along Roxas Avenue more than four years ago, although it was disappointed at the dismissal of the terrorism charges against the suspects.

Acting Mayor Sebastian Z. Duterte, said in a statement that the verdict by the Taguig City regional trial court “underscores the delivery of justice for the fatalities of the bomb attack, the survivors, their loved ones, the entire City of Davao and all the Dabawenyos who endured the impact of the said terror attack.”

The blast on September 2, 2016 killed 17 people and injured 69 others which, according to Duterte, “clearly jolted us.”

In a September 28, 2020 ruling by Judge Marivic Vitor, the seven were meted life imprisonment and ordered to pay the families of those who died P350,000 each and another P150,000 each for those injured.

But Duterte lamented that the suspects were absolved of terrorism.

“… Given the many lives lost because of the bomb attack — and given its impact on Davao City and its people — we respectfully express our dismay as we point out that this positive development is somehow tarnished by the absence of a strong law against terrorism,” he said.

“Although the perpetrators were convicted as murderers, they would have been convicted as terrorists as well — if only the Philippines has a good anti-terror law (at that time),” he added.

The terrorism charge was based on the Human Security Act of 2007. It is now replaced by the controversial Anti-Terrorism Act of 2020 which President Duterte signed on July 3.

The new anti-terror law is faced with a mounting number of petitions to be declared unconstitutional by the Supreme Court.

In dismissing the terrorism charge, Vitor said the prosecution failed to establish that the accused were coercing the government “to give in to an unlawful demand.”

Vitor also noted that a prosecution witness has not mentioned the purpose of bombing the night market, or prove that the intention was to dissuade the military from pursuing Abu Sayyaf terrorists in Basilan.

Had the suspects been convicted for terrorism, Duterte said the justice for the victims “would have been even more meaningful not only to their families but also to the peace-loving Dabawenyos who want to ensure that their future is free from the threats of terrorism.”

“We believe that the decision underlines the urgency to enforce strong laws against people and groups that espouse terrorism,” Duterte explained.

“Let us not forget what happened to us on September 2, 2016 — and the previous terror attacks in the city. Let us not forgive these terrorists,” Duterte said.