32 acquitted in razing of mosque that set off India violence 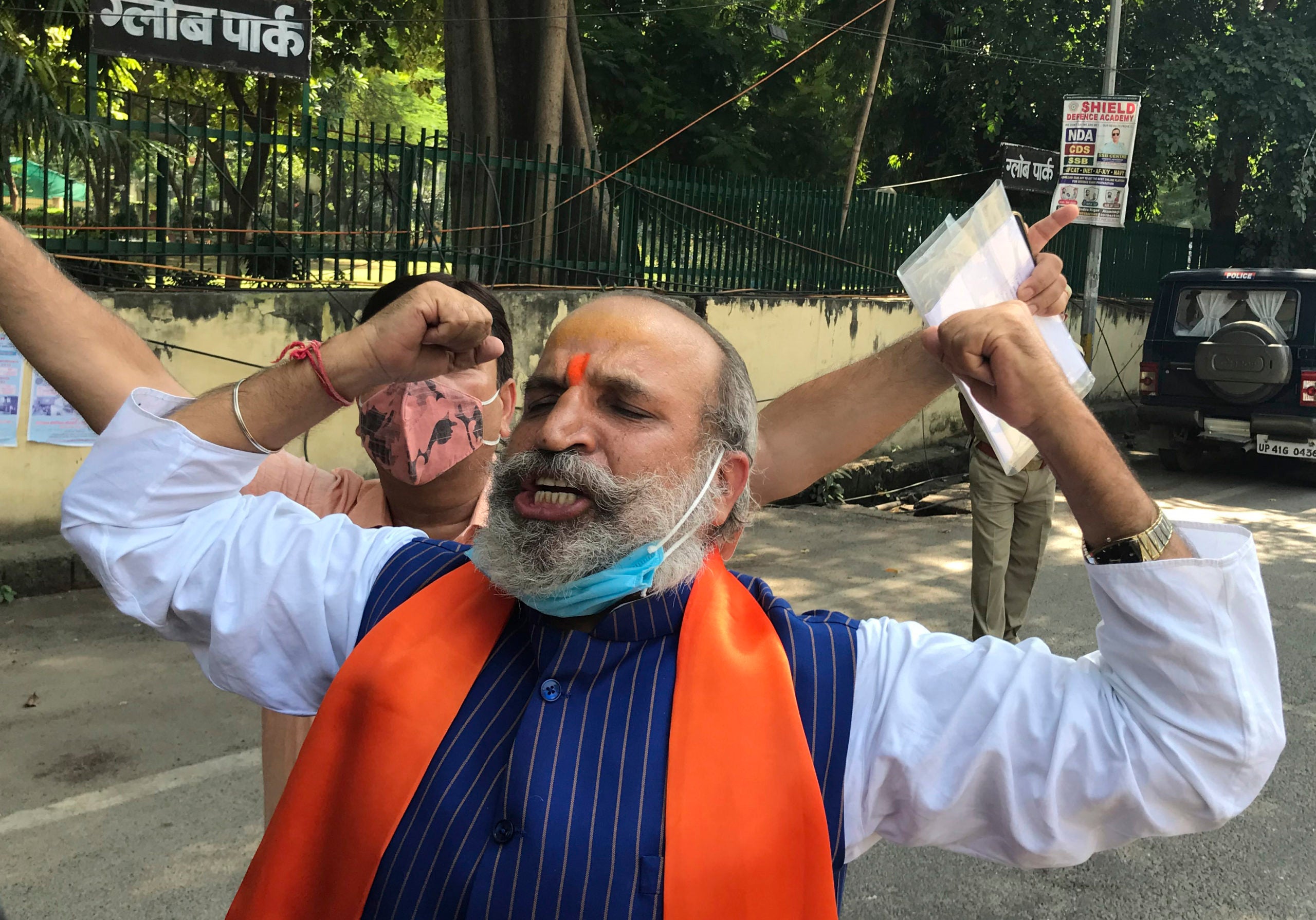 Jai Bhagwan Goyal, a leader of India’s ruling Bharatiya Janata Party and an accused in the 1992 attack and demolition of a 16th-century mosque, celebrates outside a court in Lucknow, India, Wednesday, Sept. 30, 2020. An Indian court on Wednesday acquitted all 32 accused, including senior leaders of the ruling Hindu nationalist Bharatiya Janata Party, in the case. The demolition sparked Hindu-Muslim violence that left some 2,000 people dead. (AP Photo/Rajesh Kumar Singh)

LUCKNOW, India — An Indian court on Wednesday acquitted all 32 people who had been accused of crimes in a 1992 attack and demolition of a 16th-century mosque that sparked Hindu-Muslim violence leaving some 2,000 people dead.

Four senior leaders of the ruling Hindu nationalist Bharatiya Janata Party had been among the defendants at the trial that languished in India’s sluggish legal system for almost 28 years.

Seventeen of the 49 accused died of natural causes during the trial.

The four-party leaders were accused of making inflammatory speeches that incited tens of thousands of their followers who had camped out in Ayodhya ahead of the attack on the mosque.

Last year, India’s Supreme Court ruled in favor of the building of a Hindu temple on the disputed site. Hindus believe their god Ram was born there and claim Muslim Emperor Babur built a mosque on top of a temple at the site.

The Supreme Court also ruled the demolition of the Babri Masjid violated the law and ordered the trial in the mosque demolition case be held separately.

Judge Surendra Kumar Yadav ruled there was no criminal conspiracy to attack the mosque by hardline Hindu activists and no conclusive evidence to prove it, said attorney Rishab Tripathi.

The New Delhi Television news channel cited the court order as saying the BJP leaders tried to stop activists who were trying to demolish the structure.

I..B, Singh, a defense attorney, said investigators couldn’t prove the authenticity of audio and video evidence submitted in the case and the judge held that the case lacked legal evidence that the accused were part of any conspiracy.

Joshi, who was a minister in a former BJP government, said “the truth has triumphed.”

Another defendant who was acquitted, Jai Bhagwan Goyal, said: “We had done nothing wrong.

The whole of India is happy. Lord Ram’s temple is coming up in Ayodhya city.”

The Muslim community will challenge the acquittals in an appeals court. “This is an erroneous judgment as it is against evidence and against law,” said Jaffaryab Jilani, representing the All India Muslim Law Board.

On Dec. 6, 1992, tens of thousands of Hindus gathered for a rally near the disputed site, and groups of them climbed the mosque and demolished it with axes and hammers.

The accused included Lal Krishna Advani, 92, a co-founder of the BJP who had served as the deputy prime minister in 2002-04 under Prime Minister Atal Bihari Vajpayee. Others included another former government minister Uma Bharti, as well as Kalyan Singh, 88, who was the top elected BJP leader of Uttar Pradesh state when the mosque was demolished.