‘They are making up stories’: Cayetano camp denies insulting Velasco before Duterte 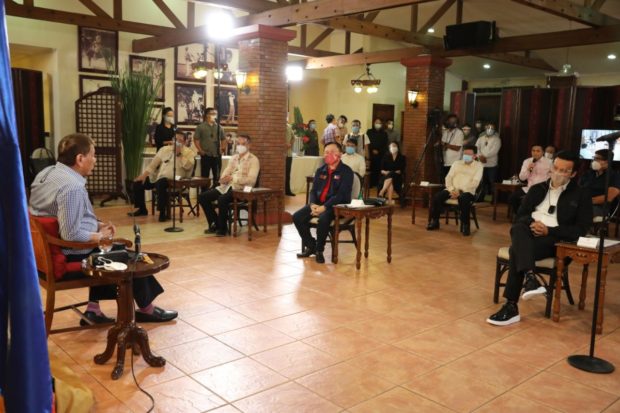 MANILA, Philippines — Deputy Speaker Luis Raymund Villafuerte on Wednesday accused the camp of Marinduque Rep. Lord Allan Velasco of “making up stories,” as he denied allegations that the latter was insulted by the camp of Speaker Alan Peter Cayetano in front of President Rodrigo Duterte.

Villafuerte made the remark after Oriental Mindoro Rep. Doy Leachon bared that Velasco was indeed “insulted openly” by some of Cayetano’s supporters in front of the President during their meeting on Tuesday night to discuss the speakership issue.

“They’re making up stories. That’s the problem. These are the type of leaders that Cong. Velasco will be having. Dapat unifying sila instead of creating intrigues,” Villafuerte told reporters in an online interview.

According to Villafuerte, “no one insulted anyone” during the meeting.

“I did not insult anyone particularly Cong. Velasco,” Villafuerte said.

“If he heard us say the truth as a matter of fact and our opinion to let Congress decide, anything is an insult to him, we cannot do anything. Clearly walang nag-insulto,” he added.

In an interview with ABS-CBN News Channel, Leachon said Cayetano’s supporters claimed that Velasco betrayed the term-sharing agreement when he supposedly attempted to oust the speaker.

(They said that even if they want to follow the wish of the president and the gentleman’s agreement, Cong. Lord betrayed the Speaker. Velasco had a betrayal for supposedly plotting to oust Cayetano but I will tell you in front of God and my family, that is not true.)

Leachon, however, said that he understood his colleagues since “they are fighting out a position.”

“Para sa akin, naiintindihan ko naman ‘yung mga kasamahan ko sa Kongreso, para sa kanila. Syempre, they are fighting out a position. Anybody in that matter, I can understand that,” Leachon said.

(I understand my colleagues in Congress. Of course, they are fighting out a position. Anybody in that matter, I can understand that.)