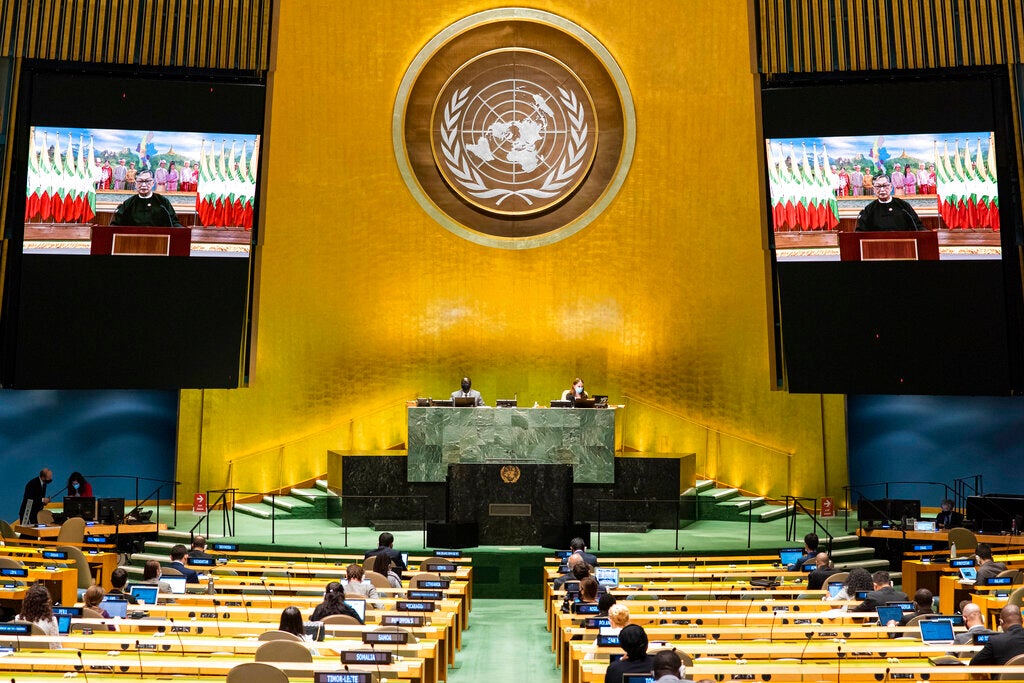 U Kyaw Tint Swe, Chairman of the Delegation of Myanmar, speaks in a pre-recorded message which was played during the 75th session of the United Nations General Assembly, Tuesday, Sept. 29, 2020, at UN headquarters in New York. (UN Photo via AP)

UNITED NATIONS  — A top Myanmar official on Tuesday accused a militant group and its supporters of hampering the repatriation of over 700,000 Rohingya Muslims who fled a military crackdown in 2017 and are now in camps in Bangladesh.

Kyaw Tint Swe, Myanmar’s minister for the office of the state counselor, also said the militant group — the Arakan Rohingya Salvation Army, known as ARSA — and another insurgent group, the Arakan Army guerrilla force, have used Bangladesh as a sanctuary in their separate campaigns against the government.

He delivered a prerecorded address Tuesday to the U.N. General Assembly’s annual meeting of global leaders, being held virtually this year because of the COVID-19 pandemic.

A Bangladesh diplomat, exercising the country’s right to reply in the General Assembly, dismissed Myanmar’s address as “another blatant demonstration of falsehoods” and rejected allegations that Bangladesh is harboring any “terrorists” from Myanmar.

The Bangladesh rebuttal accused Myanmar of genocide against the Rohingya and urged Yangon to allow international scrutiny on the ground and take back their own nationals under safe conditions.

The long-simmering Rohingya crisis exploded on Aug. 25, 2017, when Myanmar’s military launched what it called a clearance campaign in northern Rakhine state in response to what it called an attack by ARSA. The campaign led to the exodus of Rohingya Muslims to Bangladesh and to allegations that government security forces committed mass rapes and killings and burned thousands of homes.

More recently, the government has been embroiled for more than a year in a conflict with another group — the well-trained, well-armed Arakan Army.

Tint Swe said Myanmar wants to be a good neighbor to Bangladesh and remains committed “to receive verified returnees in a voluntary, safe and dignified manner” as called for in a November 2017 bilateral agreement. But he stressed that “pressure tactics will be futile.”

Tint Swe also criticized those in the international community who have made “grave accusations” against Myanmar and found it “guilty” without due process and “judicial probing of real evidence.”

Two days earlier, an independent commission established by Myanmar’s government concluded there are reasons to believe that security forces committed war crimes in counterinsurgency operations against the Rohingya — but not genocide.