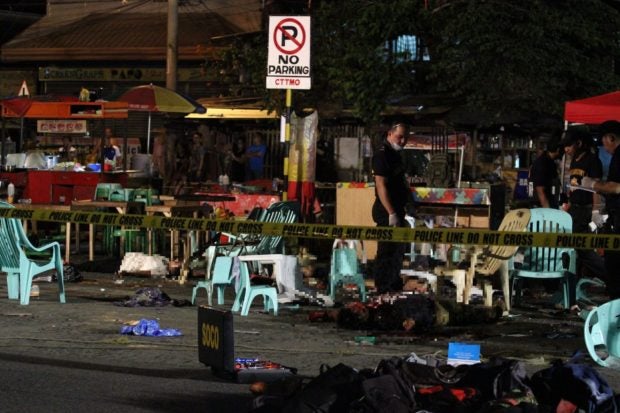 MANILA, Philippines — A Taguig City Regional Trial Court (RTC) on Tuesday convicted 11 men behind the 2016 bombing of a night market in Davao City that killed 15 people and wounded 69 others.

In a 32-page consolidated decision, Judge Marivic Vitor of the Taguig RTC Branch 266 found the members of the Islamic State-linked Maute group “guilty beyond reasonable doubt for the complex crime of multiple murder and multiple attempted murder.”

Past 10 p.m. on Sept. 2, 2016, several members of the Maute group set off an improvised explosive device at the night market on Roxas Avenue in Davao City’s central business district. Fifteen people, including seven massage therapists and a pregnant woman, died, while at least 69 others, among them students, were wounded.

The warrant also covered another person identified only as “Jam.”

All of the accused, however, were acquitted of the crime of terrorism under the Human Security Act of 2007 (Republic Act No. 9372). According to the court, the prosecution failed to establish the third element of terrorism—that the accused were “actuated by the desire to coerce the government to give in to an unlawful demand.”

Vitor said nothing in the testimony of Jericho de Roma, a member of the Maute group who turned prosecution witness, mentioned their purpose of bombing the Roxas night market.

“The prosecution failed to prove with clear and convincing evidence that the bombing was performed because the President is from Davao City, and that it was done to compel the government to reduce the military forces in Basilan, who at that time was fighting the Abu Sayyaf Group,” she said in her decision.

The court sentenced the group to suffer reclusion perpetua (20 years and one day to 40 years imprisonment) and ordered them to jointly pay the families of each of the 15 dead victims P350,000, and each of the 69 injured P150,000 representing indemnity and damages.

The court took over the cases after the Supreme Court, in February 2018, granted the request for the transfer of detention and trial from Davao City as the accused were considered “high-risk inmates.”

Taguig prosecutor Vincent Villena called the decision a win for the families of the victims.

“We commend our trial prosecutors who relentlessly pursued and secured justice for the innocent victims of the Davao blast and the families that were left behind. The trial court has delivered justice where and to whom it is due,” Villena told the Inquirer.

“We hope and pray that the court decision will help alleviate the pain and sorrow of the victims’ families. We continue to pray for peace for Davao and the entire country,” he said.