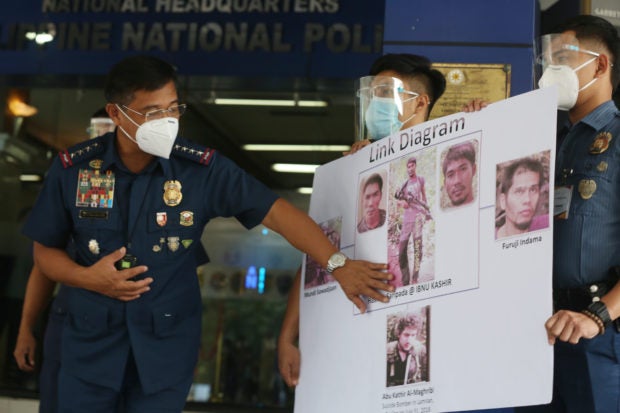 GOTCHA Philippine National Police chief Gen. Camilo Cascolan uses a diagram to establish the link of Hashim Saripada, who was arrested in Zamboanga City on Sunday, to Abu Sayyaf and Dawlah Islamiya leaders behind bombings and other attacks in Sulu and Basilan provinces. —NIÑO JESUS ORBETA

ZAMBOANGA CITY, Zamboanga del Sur, Philippines — One of the masterminds of the bombings in Jolo, Sulu, in August was killed in a clash with government soldiers in Patikul town on Monday, military reports said.

Lt. Col. Rolando Mateo, spokesperson for the Joint Task Force Sulu, said the remains of Arsibar Sawadjaan, said to be the right-hand man of Abu Sayyaf leader Radulan Sahiron and a cousin of bomb maker Mundi Sawadjaan, were left at the clash site in the village of Maligay in Patikul following a 50-minute firefight.

Members of the 45th Infantry Battalion, led by Lt. Col. Ruben Guinolbay, clashed with about 40 armed men under Sahiron’s group at 9 a.m.

Arsibar and Mundi were tagged as masterminds of the twin explosions in Jolo on Aug. 24, which killed 17 people, including two female suicide bombers, and wounded more than 70 people.

Saripada, who was arrested on Sunday in Barangay Recodo, was the subject of a warrant of arrest issued by Judge Danilo Bucoy of Branch 2 of the Regional Trial Court in Isabela, Basilan, for multiple murder and multiple frustrated murder.

Cascolan said Saripada had a “key role” in at least two bombings in the past two years in Mindanao.

Saripada, the PNP chief said, facilitated the bombing of a government militia detachment in Lamitan City, Basilan, on July 31, 2018, which killed at least 10 people.

Saripada and Mundi Sawadjaan were also behind the blasts at Our Lady of Mount Carmel Cathedral in Jolo, Sulu, on Jan. 17, 2019, which killed at least 20 people.