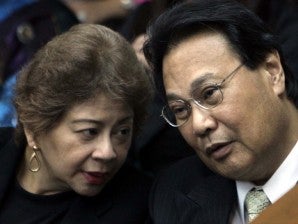 MANILA, Philippines – The wife of Chief Justice Renato Corona, Cristina, has no declared income when she bought a property in a posh subdivision in Quezon City amounting to P11 million in 2003, Internal Revenue Commissioner Kim Henares said on Wednesday.

Testifying before the Senate impeachment court, Henares said Mrs Corona registered as a “one-time taxpayer” on Sept. 9, 2003 for a “property transaction.”

“She did not file any income tax return and she was registered only as taxpayer on September 9, 2003 so any year before that she’s not a taxpayer,” Henares said.

Mrs. Corona supposedly bought the property in La Vista on Sept. 2, 2003 or just seven days before she registered as a tax payer with the Bureau of Internal Revenue.

Private prosecutor Arthur Lim then asked the BIR chief if Mrs Corona had any income when she bought the property.

“She was not registered as tax payer and therefore, for all legal purposes as far as the BIR is concerned, she has never earned any income prior to 2003,” Henares said.

Henares, responding to Senate Juan Ponce-Enrile’s queries, admitted that she only found out about this information last Friday, Jan. 20, 2012.

In addition, the BIR chief said they have an “expanded” withholding tax for director’s fees given to Mrs. Corona from 2006 to 2010.