UN failures on coronavirus underscore the need for reforms 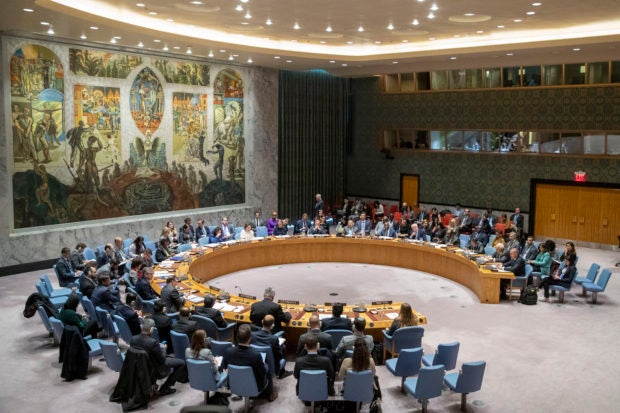 The UN Security Council holds a meeting on the Middle East, including the Palestinian question, in this Wednesday, Nov. 20, 2019 file photo, at United Nations headquarters. The coronavirus that has claimed nearly 1 million lives has underscored the failure of the United Nations to bring countries together to defeat it. “We could criticize the U.N. for this — but who are we really talking about, when we blame `the U.N.?’” Switzerland President Simonetta Sommaruga asked. “We are in fact talking about ourselves, because the U.N. is its member states. And it is often member states that stand in the way of the U.N.’s work.”(AP Photo/Mary Altaffer, File)

UNITED NATIONS — The coronavirus that has claimed nearly 1 million lives has underscored the failure of the United Nations to bring countries together to defeat it, prompting renewed calls to reform the world body so that it can meet challenges far different — and more daunting — than those it faced at its birth.

As U.N. Secretary-General Antonio Guterres said last week, “The pandemic is a clear test of international cooperation – a test we have essentially failed.” There is a “disconnect between leadership and power,” he said, warning that in the 21st century’s interconnected world, “solidarity is self-interest,” and “if we fail to grasp that fact, everyone loses.”

The first-ever virtual meeting of world leaders at the General Assembly, highlighted increasing tensions among major powers, the growing inequality between rich and poor countries, and the escalating difficulty of getting the U.N.’s 193 member nations to agree on major issues — let alone unite on reforms.

Born out of the ashes of World War II with 50 members, the United Nations has since expanded dramatically. Seventy-five years after its founding nations signed the U.N. Charter in San Francisco and vowed “to save succeeding generations from the scourge of war,” conflicts continue to rage around a world beset by inequality, hunger, and a massive climate crisis.

“We could criticize the U.N. for this — but who are we really talking about, when we blame `the U.N.?'” Switzerland President Simonetta Sommaruga asked. “We are in fact talking about ourselves, because the U.N. is its member states. And it is often member states that stand in the way of the U.N.’s work.”

Tensions were on display at a Security Council meeting when the United States and China — two of the council’s five veto-wielding permanent members — accused each other of mishandling and politicizing the coronavirus.

Russia backed Beijing, a close ally, as it has in recent years, leaving the U.N.’s most powerful body charged with maintaining international peace and security more deeply divided and unable to address major issues, including conflicts like the one in Syria.

The U.N. has had “such a hard time agreeing on so little” that it “ran the risk of impotence,” President Emmanuel Macron of France said.

“Our societies have never been so interdependent,” he added. “And at the very moment when all this is happening, never have we been so out of tune, so out of alignment.”

Kenya’s President Uhuru Kenyatta noted that “at 75, the United Nations is older than most of its member states, and more importantly older than over 96% of our global population.”

“A clear majority of the global population today cannot relate to the circumstances of its founding,” he said, and posed the question: “What does it bring to the world today?”

For many leaders, the U.N.’s most important role is its convening power — bringing all nations together to talk — but there are many frustrations about its rules, including requiring all 193 countries to agree on key documents such as the declaration commemorating the 75th anniversary, which took months of negotiations.

The most contentious debate, which began in 1979 and has gone on for 40 years with no end in sight, is over reforming the Security Council, whose five permanent members reflect the international power structure at the end of World War II: the U.S., China, Russia, France, and Britain. The council’s 10 other seats rotate among members who serve two-year terms.

While there is widespread support for revamping the 15-member council to reflect current global realities, efforts have remained mired in national and regional rivalries.

That year, world leaders called for the early reform of the council so it would be “more broadly representative, efficient and transparent.”

St. Lucia’s Prime Minister Allen Chastanet noted in his prerecorded address Saturday that the 15th anniversary of the summit where that was adopted was also being marked, and he joined other countries “in encouraging text-based negotiations so the reform efforts will be expedited.”

India’s Prime Minister Narendra Modi asked in his speech Saturday: “For how long will India be kept out of the decision-making structures of the United Nations?” With 1.3 billion people, he said, India is the world’s largest democracy, has 18% of the world’s population and is strongly committed “to maintain the relevance of this great institution.”

Namibia’s President Hage Geingob said he expressed hope at last year’s in-person General Assembly meeting that the 75th anniversary would be “an opportunity” to conclude the council’s reform — but lamented it hasn’t happened.

Argentina’s President Alberto Fernandez said the U.N. not only needs the Security Council reform but new energy to live up to its mandate.

“We need a United Nations 4.0, with its fundamental values intact and with the clarity to incorporate the immense technological changes underway, to make them more human, more democratic, and more socially inclusive,” he said.

German Chancellor Angela Merkel said “the Security Council is all too often deadlocked when clear decisions are called for” and reforms are needed so the U.N. is in a position “to master the global challenges of the 21st century.”

“At the end of the day,” she said, “the United Nations can be only as effective as its members are united.”