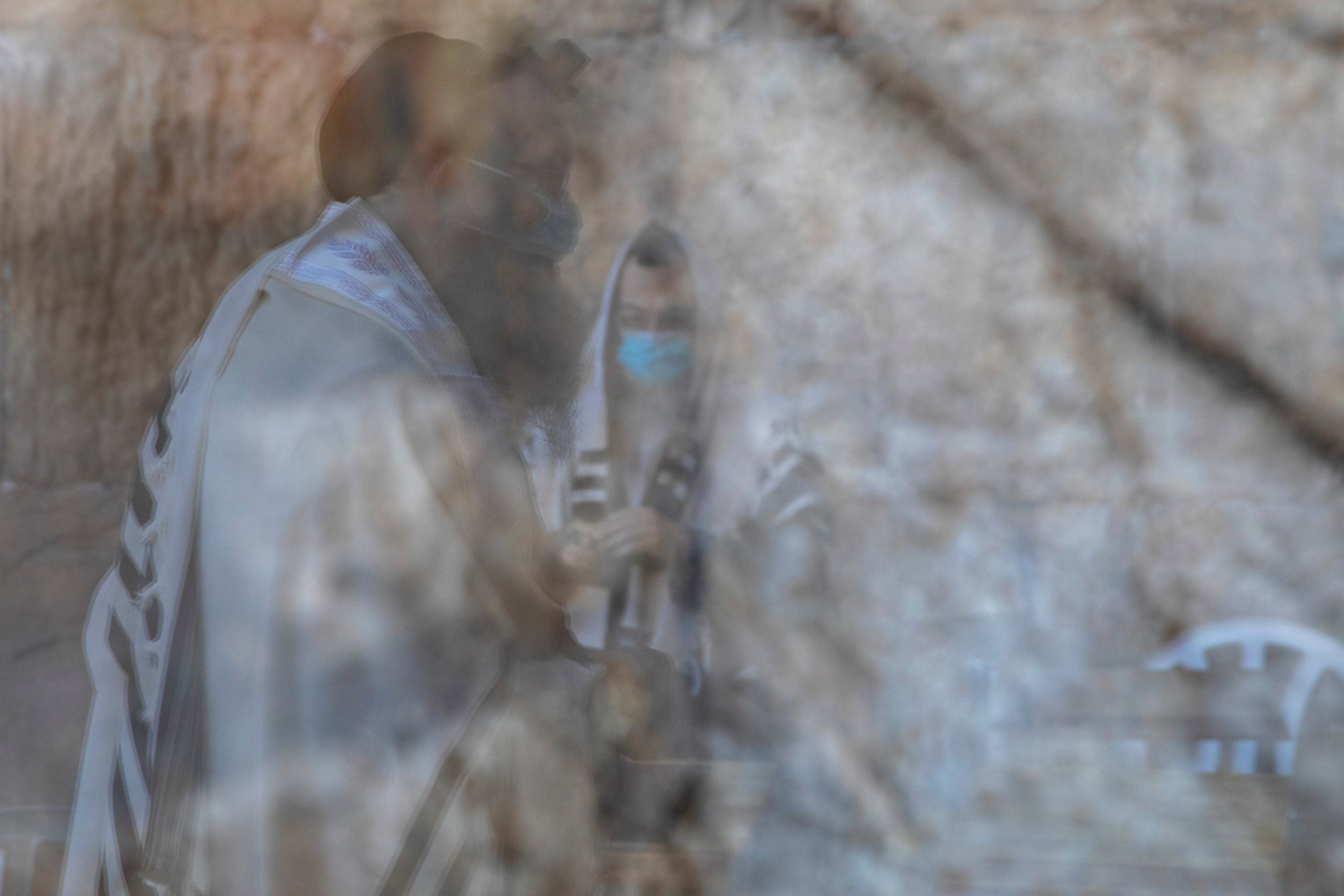 Ultra-Orthodox Jewish men wearing face masks are reflected on a door window, as they pray ahead of Yom Kippur, the holiest day in the Jewish year which starts at sundown Sunday during a three-week nationwide lockdown to curb the spread of the coronavirus at the Western Wall, the holiest site where Jews can pray in Jerusalem’s old city, Sunday, Sept. 27, 2020. (AP Photo/Ariel Schalit)

JERUSALEM  — The solemn Jewish holiday of Yom Kippur, which annually sees Israeli life grind to a halt, begins on Sunday in a nation already under a sweeping coronavirus lockdown.

Every year, businesses shut down, roads empty out and even radio and TV stations go silent as the faithful fast for 25 hours and hold intensive prayers of atonement on the holiest day in the Jewish calendar. The more secular-minded can be seen riding bikes or even picnicking on deserted highways. The holiday begins at sundown on Sunday.

But this year all non-essential businesses have already been forced to close, and Israelis have been ordered to stay within 1,000 meters (yards) of their homes throughout the High Holidays, which began last week with the Jewish New Year and continue to mid-October.

It’s the second nationwide lockdown since the pandemic began, an attempt to contain one of the most severe outbreaks in the world. Israel, with a population of just 9 million, is reporting more than 7,000 new cases a day, raising fears its hospitals could be overwhelmed.

A lockdown last spring largely succeeded in containing the outbreak, with new daily cases dropping to around a dozen in May. Authorities then reopened schools and businesses quickly, leading to a surge in cases even as the economy struggled to recover. An emergency government formed in May to manage the crisis has been plagued by infighting, adding to the public sense of despair.

In a message to the nation, Israel’s figurehead president, Reuven Rivlin, called on people to light a candle in memory of the more than 1,400 Israelis who have died from COVID-19.

“They were all loved, all known, all had names and faces,” he said. “May we be forgiven for the sin of weakness and inability, for not doing enough, for not managing to save them. Because of that, lives were lost.”

As part of the latest lockdown, Israelis can only pray in open areas close to home, with gatherings limited to 20 people. However, synagogues will be allowed to open for limited prayers with social distancing on Yom Kippur despite warnings from health experts that it could lead to further transmission.

In a videotaped statement Saturday, Prime Minister Benjamin Netanyahu acknowledged that mistakes have been made by decision-makers. But he urged people to avoid going into synagogues on Yom Kippur and to pray outdoors.

Netanyahu has also called for an end for public demonstrations against him, saying they are a public health risk. Thousands of Israelis have taken to the streets in recent months, calling on Netanyahu to resign while he is on trial for corruption charges, and because of what they say is a failed response to the coronavirus crisis.

With a divided parliament unable to pass legislation banning the demonstrations, Netanyahu last week threatened to impose a state of emergency. Protesters claim Netanyahu is trying to muzzle them.

Israel’s politically influential ultra-Orthodox Jewish community, which has suffered from high rates of infection, is opposed to restrictions on prayers, viewing it as a form of discrimination by mostly secular authorities, especially while demonstrations continue.

Hagai Levine, a professor of epidemiology and a member of the expert panel advising the government, said the number of people taking part in protests is only about one percent of those attending prayers in synagogues, and that the risk of transmission in closed spaces is “much, much, much higher.”

But he said there is some danger in attending any mass gathering, even outdoors.

David Stav, the chief rabbi of the city of Shoham, supports the restrictions and wishes they were even tighter. But he says the closure of synagogues during Yom Kippur is still “very painful for most Israelis,” even those who don’t attend regularly.

“Almost everybody goes at least once a year, and this once a year that was supposed to be on Sunday night will not happen this year,” he said, referring to the limitations on group prayer.

“It’s quite dramatic for Israelis, for all types of Israelis, secular and observant.”

In Israel, the holiday is also associated with the 1973 Arab-Israeli war, when Egypt and Syria launched a surprise attack on Yom Kippur. Families would ordinarily visit the gravesites of fallen relatives — another tradition canceled because of the virus restrictions.

“In Israel, it’s not only a religious day,” Stav said. “It’s a kind of national memorial day for all the Jewish suffering throughout Jewish history.”