LA TRINIDAD, Benguet, Philippines — Flower shop owner Margarette Bayacsan has been making ribbons fashioned out of silk and other sheer fabric materials to while away the time at her rented stall in the public market here.

With no customers in sight, Bayacsan said she would keep making ribbons for now to embellish bouquets of flowers until the business picks up once more.

“I’m preparing these ribbons to save me time in case our usual buyers place their orders in the coming days,” she told the Inquirer.

According to Bayacsan, the coronavirus pandemic has cut deeply into flower sales and the crisis “couldn’t have come at a worse time.”

“We had brisk sales in February, especially during Valentine’s Day. But when March came, our flowers all went to waste,” she said.

Between March and May, she lost 30 boxes of assorted cut flowers, with each box containing 50 bundles. A bundle of assorted flowers used to sell for a minimum of P100.

“Nobody was buying flowers during that time, so the flowers just wilted,” she said. 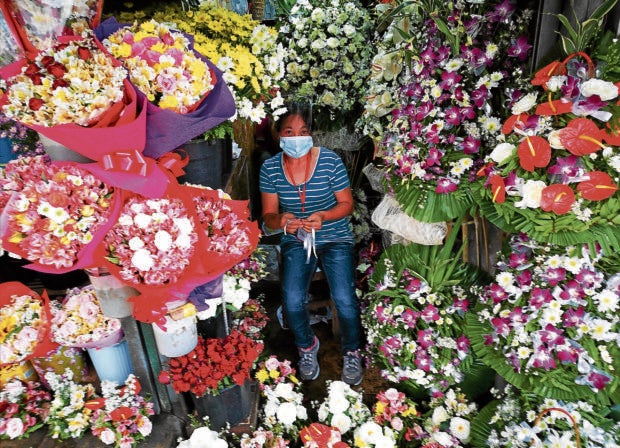 DIPPING SALES Flower shops at Baguio City’s Maharlika Livelihood Center used to earn P5,000 a day last year due to weddings and other gatherings. But the pandemic saw daily sales drop to P1,000 for some of these stores. —PHOTOS BY EV ESPIRITU

With the easing of community quarantine, Bayacsan opened her stall again and went back to selling flowers. But this time, she also ventured into selling potted plants, hoping to recover her huge losses.

The plunging demand for homegrown flowers has forced farmers and traders to cut back on prices by as much as 50 percent starting July to make their losses a little more bearable.

Lolita Bentrez, the provincial agriculturist, said the hardest hit among farmers during the pandemic were those engaged in raising cut flowers.

Benguet produces 25 million to 30 million metric tons of fresh blooms annually, based on provincial government data. Over half of these are programmed by farmers to be harvested between February and April, the peak season.

Benguet’s semitemperate climate is suitable for different flowers, grown either on open fields or greenhouses.

Bentrez said cut flower farmers began to see income losses when the Panagbenga (Baguio Flower Festival) and other large crowd-drawing events in the Cordillera were canceled at the onset of the pandemic. 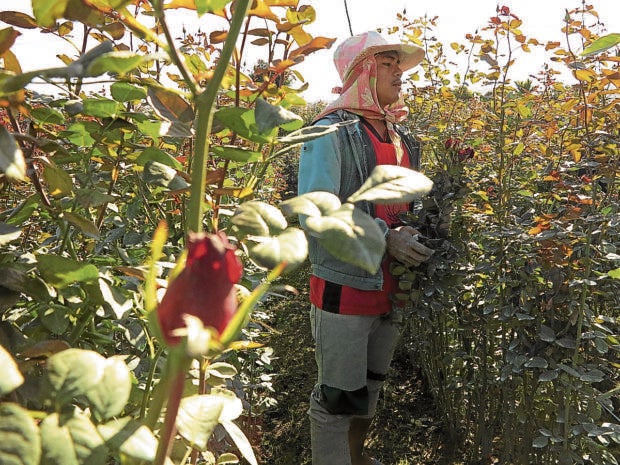 BESTSELLER Different varieties of roses are top sellers for cut flower gardens in Benguet province. Flower farms in towns like Atok are also sources of top quality blossoms like gladiola, chrysanthemum, anthurium, baby’s breath, agapanthus (lily of the Nile) and the sunflower.

The grand floral float parade during Baguio’s flower fest had drawn large orders of flowers in the past years. Float designers would usually buy fresh blooms from flower farms, mostly in La Trinidad and in nearby Atok and Tublay towns, where cut flowers are a major industry.

Bentrez said some cut flower farmers had programmed their planting so they could harvest in time for All Saints’ and All Souls’ Day, or “undas,” believing that the industry would bounce back if the pandemic waned.

But even their hope of a gradual rebound come undas might be lost when cemeteries in Metro Manila and other parts of the country were ordered closed by the government amid growing concerns over mass gatherings and virus transmission.

“We’re looking forward to getting better sales in the coming undas even if the cemeteries will be closed. That’s our only hope,” said Julie Ciano, a flower vendor in Baguio City.

Ciano said she and other vendors could only display a few cut flowers “because business remained slow.”

“Nowadays, most of our customers are buying potted plants such as roses, cypress, lavender, mayana, cactus and succulents,” she said.

To get by, Ciano said she would sell cooked rice while waiting for buyers of her flowers.

Zenaida Boadilla, 62, owner of D’ Cariño-Boadilla Flower Shop at Maharlika Livelihood Center, also in Baguio, said that during the peak season, they could earn as much as P5,000 daily.

“Aside from our regular daily profits, we would earn more from orders for weddings and other occasions. But now, we had zero income between May and June,” Boadilla said. 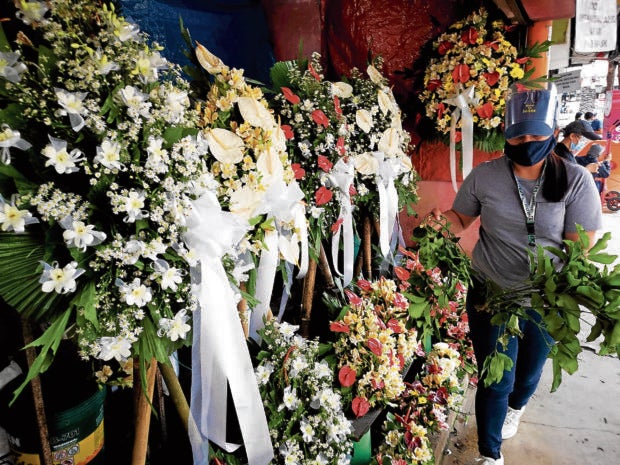 FOR THE DEPARTED Baguio’s flower traders are expecting to earn back losses they incurred during the lockdown until the government ordered the closure of all cemeteries during All Saints’ Day and All Souls’ Day. Wakes have also been banned so wreaths are not in demand for families who immediately bury or cremate their dead during the pandemic.

With the lingering threat of virus transmission and restricted movement of people, many farmers in this capital town spent their days maintaining their gardens. Some of them have also ventured into selling potted plants and other cash crops as alternative sources of income.

Bentrez said cut flower farmers were given priority for financial assistance from her office to help them survive the pandemic. It was later expanded to vegetable farmers when additional aid from the Department of Agriculture, which also offered a P25,000 loan to farmers, was released.

Most farmers benefited from the government’s social amelioration program, too. “Our target is to give assistance to over 600 cut flower farmers, 50 farmers for each of the 13 towns of Benguet,” Bentrez said.

“As tourism is slowly opening up, farmers are hoping that hotels and other tourism-related establishments will start buying flowers again,” she said.