Pope to UN: Use COVID crisis to come out better, not worse 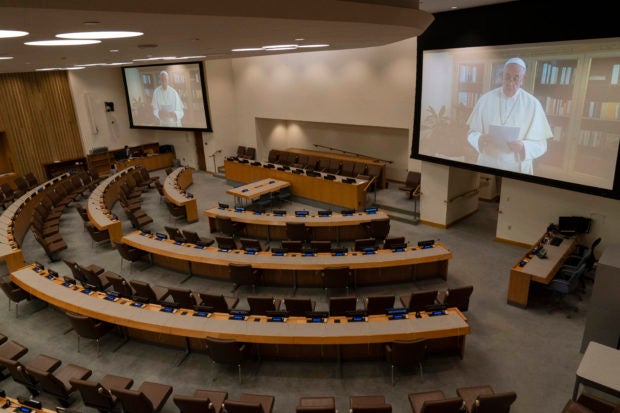 ROME  — Pope Francis urged world leaders Friday to use the coronavirus emergency as an opportunity to reform the injustices of the global economy and the “perverse logic” of the nuclear deterrence doctrine, warning that increased isolationist responses to problems “must not prevail.”

Francis laid out his appeal for greater involvement and influence of the United Nations in protecting the poor, migrants and the environment in a videotaped speech Friday to the U.N. General Assembly, held mostly virtually this year because of the pandemic.

Francis said the world has a choice to make as it emerges from the COVID-19 crisis and addresses the grave economic impact it has had on the planet’s most vulnerable: greater solidarity, dialogue and multilateralism, or self-retreat into greater nationalism, individualism and elitism.

The latter, he said, “would certainly be detrimental to the whole community, causing self-inflicted wounds on everyone. It must not prevail.”

Ever since the virus struck Italy in late February, Francis has sought to show the interconnectedness of the pandemic with the health of the planet and its people. His message is that the crisis provides a chance “to come out better or worse,” and that there are plenty of reasons to work to come out better.

“The pandemic has shown us that we cannot live without one another, or worse still, pitted against one another,” he said. “This is why, at this critical juncture, it is our duty to rethink the future of our common home and our common project.”

Francis is expected to lay out further his vision for solidarity and the post-COVID world in an encyclical to be released Oct. 4. In a way, his U.N. speech was something of an executive summary or blueprint for what is expected, a brief overview of his core concerns of economic justice, environmental protection and care for society’s most marginal.

Francis reaffirmed the Catholic Church’s opposition to abortion — one of the Vatican’s key ideological points of contention with the United Nations. He said recourse to abortion had only increased in the pandemic, saying it was “sad” that some countries were promoting abortion as an essential service to be provided even during the health emergency.

“It is troubling to see how simple and convenient it has become for some to deny the existence of a human life as a solution to problems that can and must be solved for both the mother and her unborn child,” he said.

Francis called for basic health care for all, the reduction, if not forgiveness of debt for the world’s poorest countries and a reform of the Bretton-Woods financial institutions which he said are only escalating inequalities between rich and poor.

“Now is a fitting time to renew the architecture of international finance,” he said.

He repeated his demand for an end to the doctrine of nuclear deterrence, which he articulated most fully during his 2019 visit to Japan at the memorial dedicated to victims of the atomic bombing in Hiroshima.

“We need to dismantle the perverse logic that links personal and national security to the possession of weaponry,” he said.

“Nuclear deterrence, in particular, creates an ethos of fear based on the threat of mutual annihilation; in this way, it ends up poisoning relationships between peoples and obstructing dialogue.”