CEBU CITY, Cebu, Philippines — Environment Secretary Roy Cimatu on Friday suspended two mining companies in Cebu that provided the crushed dolomite for the controversial Manila Bay “beach nourishment project” of the environment department after they allegedly destroyed corals in the waters near the mine site.

Dolomite Mining Corp. (DMC) and Philippine Mining Service Corp. (PMSC), which processes quarried dolomite rocks, will remain suspended until an investigation by the Department of Environment and Natural Resources (DENR) is concluded.

“I have to stop the operation while an investigation is conducted to determine whether or not the two companies violated some rules,” said Cimatu, who visited the dolomite mine site at Alcoy town in southern Cebu province.

DMC is the only large-scale producer of dolomite materials, according to Environment Undersecretary Benny Antiporda.

The company has a 25-year mineral production sharing agreement (MPSA), which covers a total of 524 hectares in Cebu’s Alcoy and Dalaguete towns. PMSC’s mineral processing permit is valid until 2023.

Cimatu directed the Environmental Management Bureau (EMB) to test the air and water quality in Alcoy’s Barangay Pugalo where the crushed dolomite was loaded on bulk carrier vessels anchored off the coastal village before they sailed for Manila.

The Manila Bay beautification project has been hounded by criticisms since the first trucks loaded with dolomite “sand” first appeared on a part of the famed Manila Baywalk beside the US Embassy on Sept. 3.

The criticisms centered on the timing and the amount to be spent for the project—P389 million—while the country was grappling with a raging pandemic.

In a radio interview on Friday, Vice President Leni Robredo said the continuation of the beach nourishment project was insensitive and showed a lack of a sense of urgency in dealing with the national health emergency.

“If they think that the [project] would help improve the appearance of Manila Bay, I have no problem with that. But my problem is the timing,” she said. “That’s important because the allocation could have been realigned for urgent needs.” She noted President Duterte’s oft-repeated complaint that the government was running out of funds.

“Many people are hungry right now, many people need help, the [new coronavirus] transmission has yet to be controlled, and then we see this,” Robredo said. 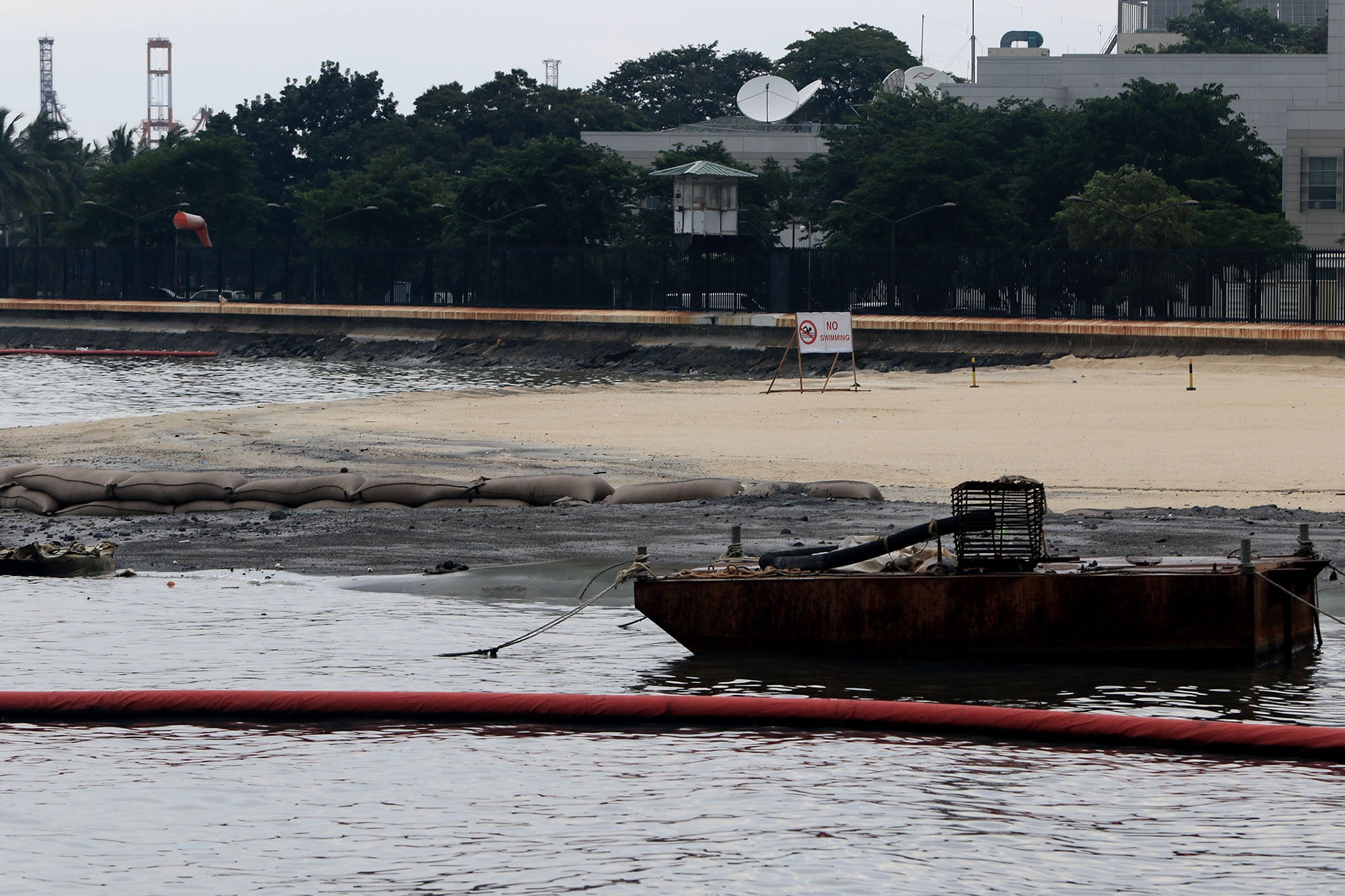 GRAY AND WHITE Manila Bay’s natural gray sand appears to be pushing its way to the surface, breaking through tons of dolomite “white sand” dumped near the US Embassy (in the background) as part of the environment department’s P389-million rehabilitation project. On Friday, Environment Secretary Roy Cimatu ordered the suspension of the two mining companies that sold the dolomite to the government for allegedly silting the waters off a village in Cebu near the mine and damaging the marine ecosystem. —RICHARD A. REYES

Environmentalists also questioned the sustainability of the artificial “white sand,” warning that the next typhoon could wash it away, leading to a waste of money.

The Akbayan party list on Thursday petitioned the Supreme Court to cite the DENR for contempt for violating the court’s 2008 order to clean up and rehabilitate Manila Bay when it dumped the crushed dolomite rocks to create an artificial white sand beach.

“A dolomite beach in Manila Bay is nothing but a window-dressing project. Disregarding the unconscionable cost at this time of the COVID-19 pandemic, it might even be acceptable if it does no harm to the environment and to humans. But it does,” Akbayan said in its petition.

It cited a data safety report by the US-based construction materials supplier Lehigh Hanson Inc., which stated that dolomite could cause cancer, lung damage through prolonged repeated exposure, and skin and eye irritation.

The Cebu Provincial Environment and Natural Resources Office last week reported that corals within 500 meters from the shores of Barangay Pugalo were destroyed by the dolomite silt. Cimatu on Friday ordered the EMB to again send divers to check the condition of the corals.

Antonio Castillo, the senior manager for corporate planning of PMSC, said they would cooperate with the government investigation.

“We could not say no to their order because they are the regulating body,” he said in an interview. 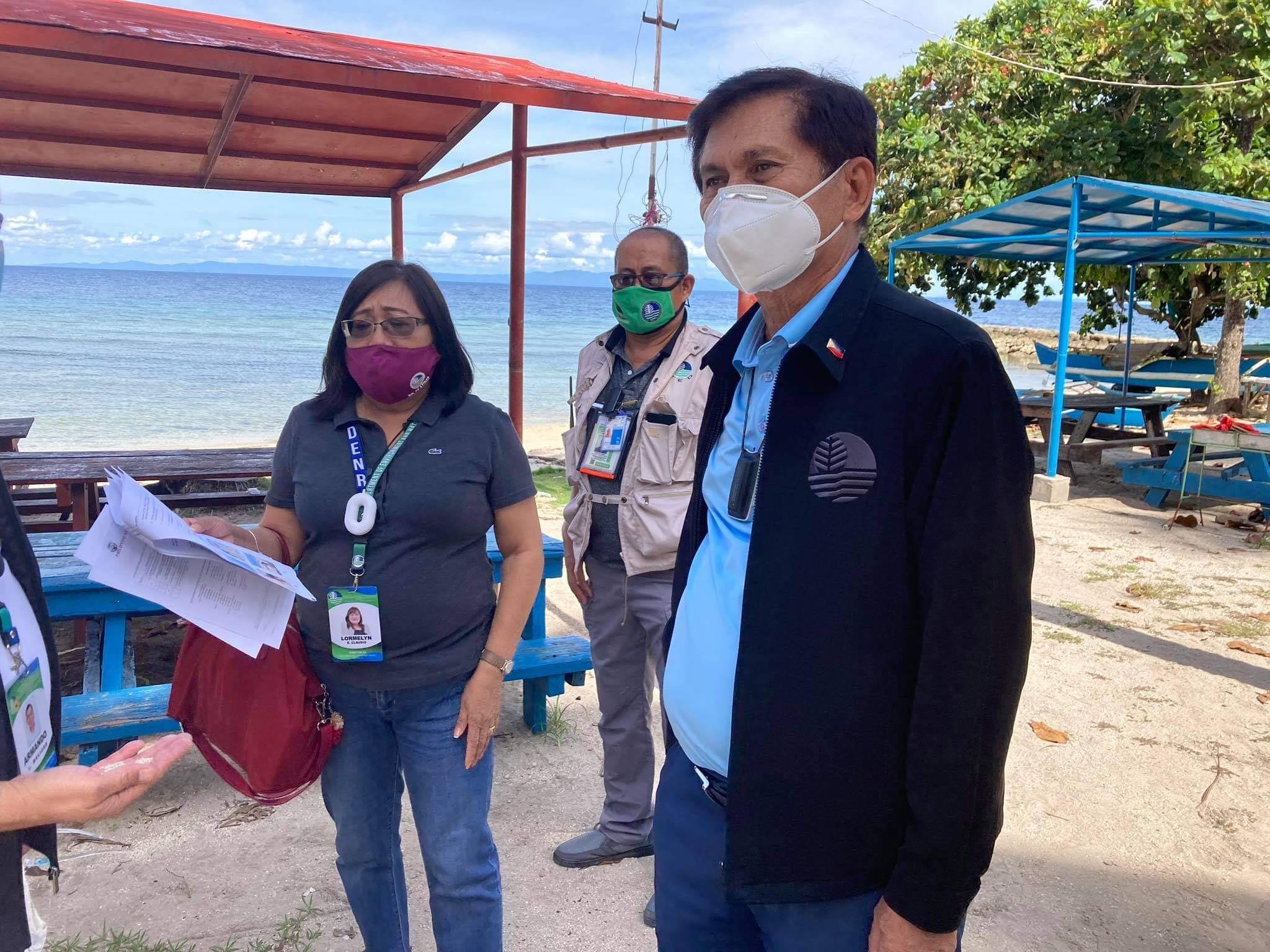 Officials of the Cebu provincial government, including Gov. Gwendolyn Garcia, were surprised to learn that dolomite from the province was being shipped to Manila.

On Sept. 8, Garcia stopped the further extraction, sale and transport of dolomite locally, which is beyond the provisions of the MPSA issued by the EMB.

At least 10,500 wet metric tons of Alcoy dolomite were supposed to be transported to Manila in addition to the 7,000 wet MT that had already been shipped, Garcia said.

The regional office of the Mines and Geosciences Bureau had issued two ore transportation permits to PMSC authorizing the shipment of dolomite to Manila valued at P1.64 million. Three more permits are pending.

Since the sale of dolomite is not covered by the MPSA, Garcia said there was no prior assessment of the quarrying’s impact on the environment in Alcoy, which is a critical area as it is the natural habitat of the endangered and endemic “siloy” birds, or the Cebu black shama.

Garcia said Alcoy dolomite had been sold as a substitute for sand and gravel in the domestic market without the necessary permits from the Capitol and tax payments to the province.

Provincial Treasurer Roy Salubre earlier said that based on their initial computation, DMC and PMSC should pay P726,923.077 to the province for the dolomite shipped to Manila.

Garcia said they were looking for a “fair, transparent and accountable way” of responding to the dolomite controversy because “we answer to the people.”

—With a report from Nikka G. Valenzuela