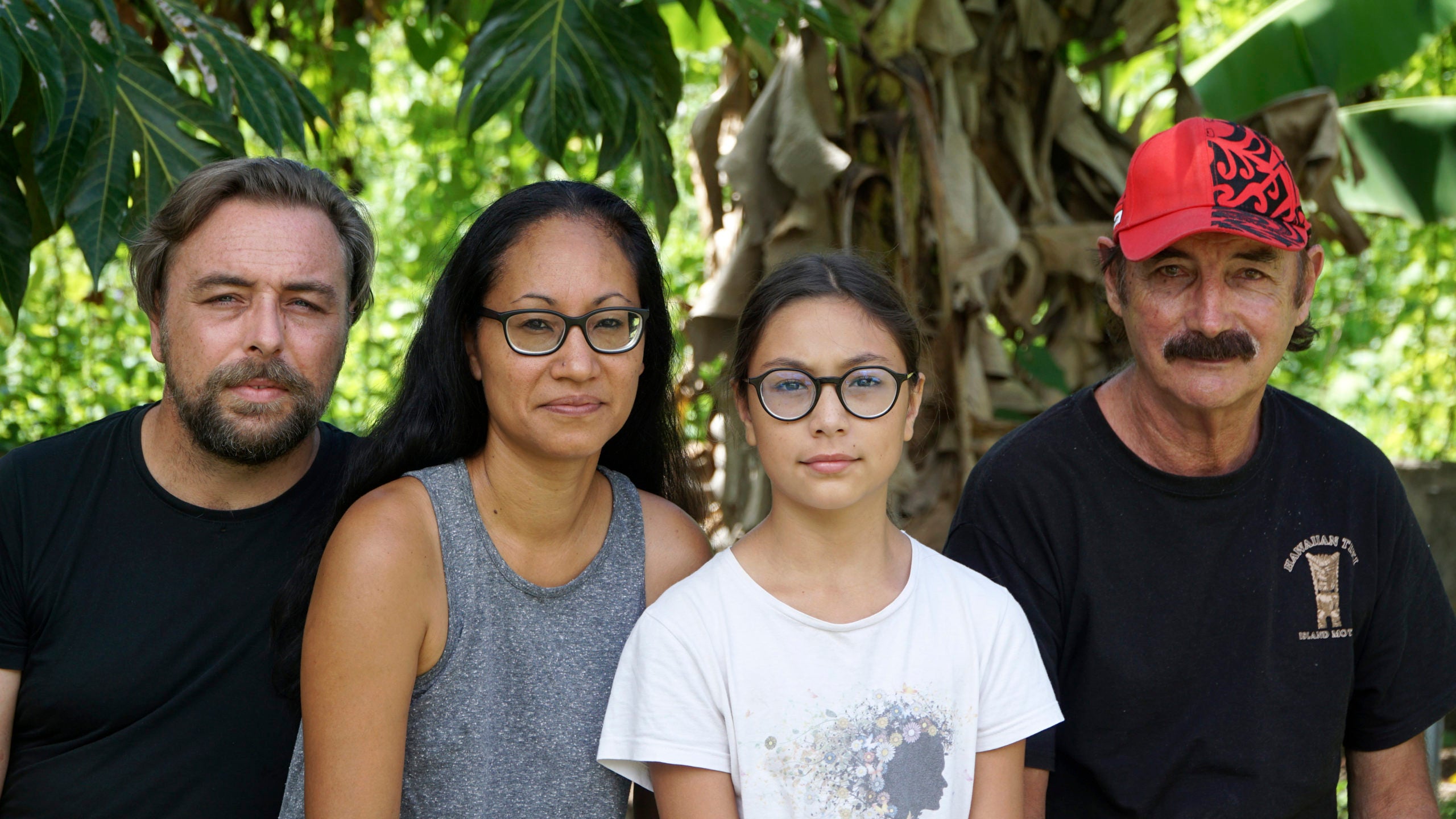 A group who have been stranded in Tahiti, pictured from left, Benjamin Baude, Kissy Ika Chavez Baude, Gaïa Baude Ika, and Thierry Gourtay in Afareaitu on Moorea Island, Tahiti, Saturday, Sept. 19, 2020. A group of 25 residents from remote Easter Island has been stranded far from home for six months now. Many arrived in March planning to stay for just a few weeks. But they got stuck when the virus swept across the globe and their flights back home on LATAM airlines were canceled. LATAM says it doesn’t know when it will restart the route. (Teraihau Rio via AP)

WELLINGTON, New Zealand  — For people around the world, the coronavirus has caused distressing separations and delayed homecomings. But the situation for a group of 25 residents from remote Easter Island stands out.

For six months now the group has been stranded far across a vast stretch of ocean on Tahiti in French Polynesia. Children remain separated from their parents, husbands from their wives.

Mihinoa Terakauhau Pont, a 21-year-old mom who is among those stranded, is due to give birth to her second son any day now, but can’t have her husband by her side because he’s back home. Her grief has left her exhausted.

Usually considered a tropical paradise, Tahiti has become a kind of prison for them. Many arrived in March planning to stay for just a few weeks — they’d come for work, or a vacation, or for medical procedures. But they got stuck when the virus swept across the globe and their flights back home were canceled.

Each day they have been going to the authorities and begging for help in Spanish, in French, and in English. They’ve considered chartering a plane or trying to hitch a lift on a military ship to make the journey of some 4,200 kilometers (2,600 miles). But each time their hopes rise a little, their plans turn out to be too expensive or impractical.

Home to about 8,000 people, Easter Island is a tiny speck in the vast Pacific Ocean, located midway between Polynesia, in the South Pacific, and South America. Also named Rapa Nui, the Chilean territory is renowned for its imposing moai — giant heads carved from volcanic rock by inhabitants hundreds of years ago. For Easter Islanders, Tahiti has long been a stopping-off point, a connection to the rest of the world.

Until the virus struck, LATAM airlines ran a regular return route from Santiago, Chile, to Easter Island and on to Tahiti. LATAM said it suspended the route in March because of the virus and doesn’t have a timeline for restarting it. No other airlines offer a similar service.

“The resumption of this flight is subject to the development of the pandemic and travel restrictions in place,” the airline said in a statement.

Terakauhau Pont arrived in Tahiti in January to visit her first son, who was staying on a nearby island with her parents. She was due to fly home in March. As the weeks trying to get a flight back slipped into months, she heard from afar that her husband had lost his job at a hotel because of the downturn in the tourism industry caused by the virus.

Now, Terakauhau Pont’s mother has started a garden and her father is going fishing so they have enough food to eat each day.

“It’s the only way to survive,” she said.

She has pleaded with the authorities to help and has even written to leaders in mainland Chile and on Easter Island, but without any success.

She said the person who has done the most to help is Kissy Baude, a 40-year-old administrative technician who has lived in Tahiti for years but was due to start a new job on her native Easter Island in April.

Because of her contacts on Tahiti, Baude has become the unofficial leader of the group — its social worker, psychologist, and spokesperson. Baude said the group has survived thanks to the generosity of Tahitians, who have been providing them with food and accommodation long after many of them ran out of their own resources.

Baude said that before the virus struck, she was eagerly anticipating returning to Easter Island.

She was looking forward to seeing her mother, who has a room prepared and waiting. But now, her mother’s husband also remains stranded with her on Tahiti, after traveling there for colon surgery in March.

Baude said one option they’ve been exploring is to fly a circuitous route to Los Angeles and then to Santiago and hope they get repatriated from there. But even then their return isn’t certain and many in the group can’t afford the expense.

Among the 16 females and nine males stranded are seven children aged between 2 and 14. And the clan is expected to grow by one on about Oct. 3, the day Terakauhau Pont is due to give birth to a son that she and her husband plan to name Anuihere.

Some in the group have struggled to find enough money simply to eat, while others have found it tough going emotionally. Lately, they have been able to collect some money online after setting up two donation pages.

Baude gets emotional when talking about their situation. She said some of them fear speaking up in case they face repercussions back on Easter Island, but she isn’t afraid.

“We just want to go back to our homeland,” she said.