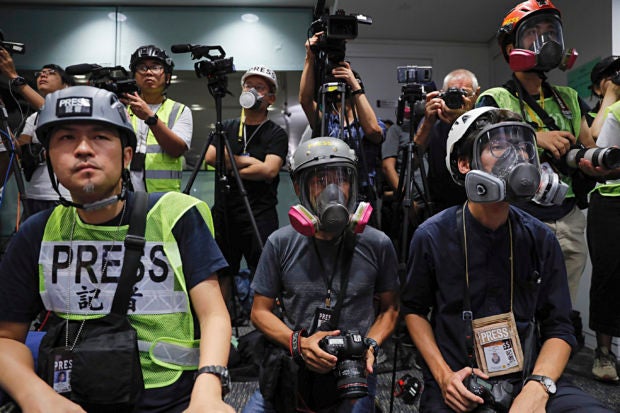 In this Monday, Sept. 9, 2019, file photo, in a sign of protest against the police using force against the media, press photographers wear protective gear during a police media conference in Hong Kong. Hong Kong’s professional journalism association on Thursday, Sept. 24, 2020, protested new rules restricting who can provide press coverage during demonstrations, saying the government has no right to determine who is or isn’t a reporter. (AP Photo/Kin Cheung)

HONG KONG — Hong Kong’s professional journalism association on Thursday protested new rules restricting who can provide press coverage during demonstrations, saying the government has no right to determine who is or isn’t a reporter.

The rules outlined in a Tuesday letter from police have been criticized as a further erosion of the semi-autonomous Chinese territory’s once robust press freedoms since Beijing imposed a sweeping national security law in June that has had a chilling effect on political speech.

Only journalists registered with the Government News and Media Information Service or members of “internationally recognized and reputable” foreign media outlets will be recognized as journalists during protests, according to the police letter.

That appears to undercut the authority of the Hong Kong Journalists Association and Hong Kong Press Photographers Association to vet candidates for membership and issue press cards, placing that right solely in the hands of government officials, as is the case in mainland China.

“Police cannot be permitted to use administrative means to screen only officially recognized media, thus undermining the fundamental rights of the people of Hong Kong,” the Hong Kong Journalists Association said in a statement.
In their letter, the police said their goal is to weed out troublemakers posing as journalists who they say disrupted police action against protesters over several months of sometimes violent anti-government demonstrations.

“Following the amendment, the definition of ‘media representatives’ will become clearer and unequivocal, allowing front-line officers to efficiently and swiftly verify the identity of media representatives so that facilitation can be provided without compromising police operational efficiency,” the police letter said.

The regulations leave it to the police to determine what media outlets are “internationally recognized and reputable” and could discriminate against freelancers and independent and student journalists, who often work alone with minimal equipment and infrastructure.

Hong Kong’s press freedom “is already in retreat as a result of pressure from Beijing,” the group said, citing among cases the expulsion of Financial Times Asia editor Victor Mallet in October 2018 after he chaired an event at the Foreign Correspondents’ Club of Hong Kong that was condemned by Beijing.