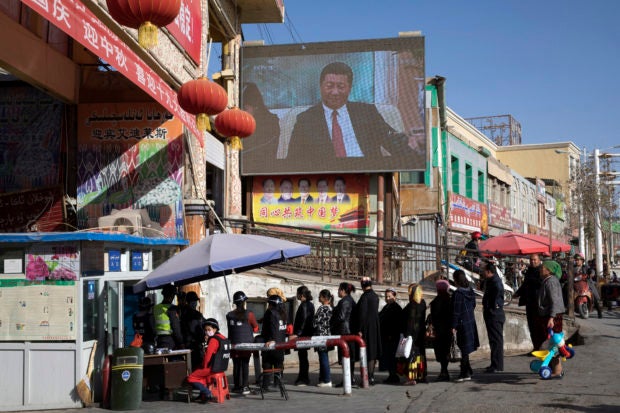 In this Nov. 3, 2017, file photo, residents line up at a security checkpoint into the Hotan Bazaar where a screen shows Chinese President Xi Jinping in Hotan in western China’s Xinjiang region. (AP Photo/Ng Han Guan, File)

Sydney, Australia — China’s network of detention centers in the northwest Xinjiang region is much bigger than previously thought and has been expanded in recent years, according to research presented by an Australian think tank Thursday.

The Australian Strategic Policy Institute said it had identified more than 380 “suspected detention facilities” in the region — where China is believed to have detained more than one million Uighurs and other mostly Muslim Turkic-speaking residents.

The number of facilities is around 40 percent greater than previous estimates and, according to Australian researchers, has been growing despite China’s claims that many Uighurs have been released.

Fourteen more facilities were under construction in 2020 and around 70 have had fencing or perimeter walls removed, indicating their use has changed or they have been closed.

US lawmakers recently voted to ban imports from Xinjiang, citing the alleged use of systematic forced labor.

It has defended the so-called training centers as necessary to stamp out extremism.