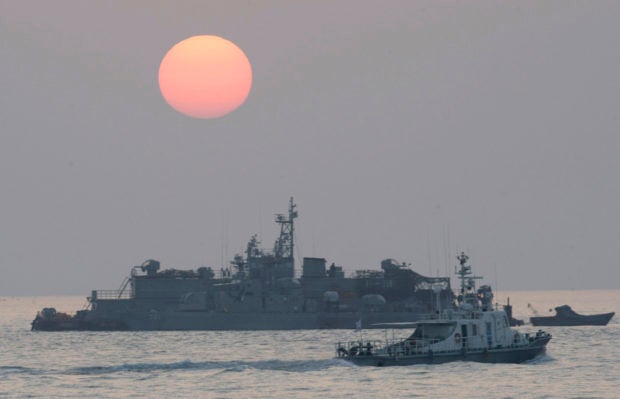 SEOUL — South Korea said Thursday that North Korean troops shot a South Korean government official who may have attempted to defect and set his body on fire after they found him on a floating object in waters near the rivals’ disputed sea boundary.

According to Seoul’s announcement, the man disappeared from a government ship that was checking on potential unauthorized fishing in an area south of the boundary on Monday, a day before he was found in North Korean waters.

North Korea sent officials wearing gas masks aboard a boat near the man to learn why he was there on Tuesday afternoon. Later in the day, a North Korean navy boat came and opened fire at him, South Korea’s Defense Ministry said.

Sailors from the boat, putting on gas masks and protective suits, poured gasoline on his body and set it aflame, the Defense Ministry said, citing intelligence gathered by surveillance equipment and other assets. The ministry said that it wasn’t clear what caused his death and whether he died after being shot.

It was also unclear how he ended up in the North. But a defense official said the man might have tried to defect to North Korea. The official, requesting anonymity citing department rules, said the official was wearing a life jacket on a small floating object and that the military had obtained information that he wanted to go to North Korea.

The official said North Korea may have determined to kill him in line with its stringent anti-coronavirus rules that involve shooting anyone illegally crossing the border.

North Korea has steadfastly said there hasn’t been a single virus case on its territory, a claim widely disputed by many foreign experts. Observers say a pandemic could cause devastating consequences in North Korea because of its broken public health care system and a chronic shortage of medical supplies.

South Korea sent a message to North Korea via a communication channel at the U.S.-led U.N. Command in South Korea on Wednesday to ask about the missing official. But North Korea hasn’t responded, according to the South Korean Defense Ministry.

Little is known about the 47-year-old man, except that he was among 18 officials aboard the government boat belonging to the Oceans and Fisheries Ministry on Monday. When his colleagues searched for him after his disappearance, they only found his shoes left on the ship. Days of search involving aircraft and vessels came up empty-handed, according to the defense and oceans ministries.

The incident is expected to deepen already-strained ties between the rivals, whose exchange and cooperation programs have virtually all been suspended amid a deadlock in broader nuclear diplomacy between Pyongyang and Washington. In June, North Korea blew up an inter-Korean liaison office on its territory to protest South Korean civilians sending leaflets against the North across the border.

Defections of South Koreans to North Korea are highly unusual. More than 30,000 North Koreans have fled to South Korea in the past 20 years for political and economic reasons.

In July, however, a North Korean defector slipped back to North Korea, prompting North Korea to impose a lockdown of a border city and declare a state of emergency over virus concerns.