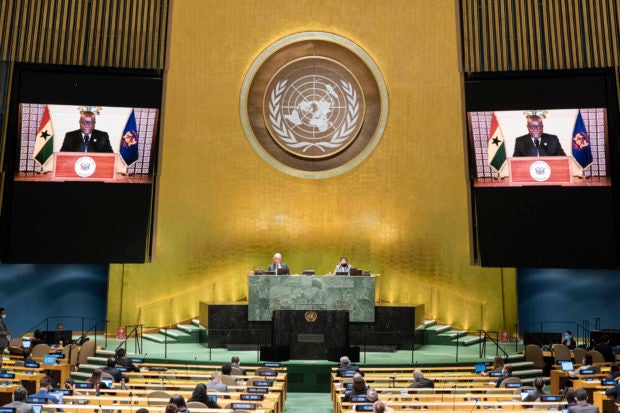 In this photo provided by the United Nations, the pre-recorded message of Nana Addo Dankwa Akufo-Addo, President of Ghana, is played during the 75th session of the United Nations General Assembly, Wednesday Sept. 23, 2020, at U.N. headquarters in New York. (Eskinder Debebe/United Nations via AP)

UNITED NATIONS  — World leaders gathering remotely Wednesday criticized a haphazard global response to a microscopic virus that has unleashed economic havoc and taken nearly 1 million lives in its march across the globe.

In the words of Kazakhstan’s president, it was “a critical collapse of global cooperation.”

“Our world has been turned upside down,” said Ghana’s president, Nana Akufo-Addo. “We all fell together and looked into the abyss together.”

The coronavirus pandemic and its consequences topped the list of concerns on the second day of prerecorded speeches by world leaders at the General Assembly’s first virtual high-level meeting.

Countries large and small spoke about struggling to deal with its impact without international coordination.

Pleas for the world to work together to combat the scourge and other global problems have taken the forefront at this week’s U.N. gathering that itself was altered by the virus. 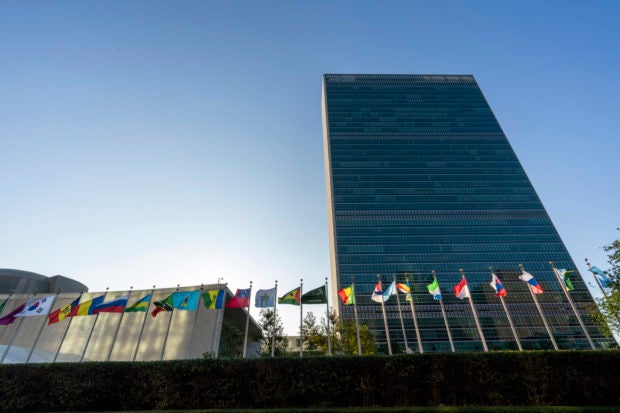 Member state flags fly outside the United Nations headquarters during the 75th session of the United Nations General Assembly, Wednesday, Sept. 23, 2020. This year’s annual gathering of world leaders at U.N. headquarters will be almost entirely “virtual.” Leaders have been asked to pre-record their speeches, which will be shown in the General Assembly chamber, where each of the 193 U.N. member nations are allowed to have one diplomat present. (AP Photo/Mary Altaffer)

“A pandemic is by definition a global challenge” and requires a global response, but COVID-19 “has unfortunately revealed how we are tempted to react to immediate threats — nationally, not internationally,” said Finland’s president, Sauli Niinisto.

Instead of uniting behind multilateral efforts to tackle the coronavirus, he said, “we witnessed a series of national responses,” which “raise concerns on how we will be able to combat other global challenges.”

Kazakhstan’s president, Kassym-Jomart Tokayev, warned that the world is “coming close to what some have already called a state of ‘global disfunction'” as a result of the pandemic, and the global system is now “on the verge of dramatic upheavals that may lead to irreversible consequences.”

“Now is a make-or-break moment for the humankind,” he warned.

Tokayev called for upgrading national health institutions, taking politics out of the development of a coronavirus vaccine, and revising regulations to improve the World Health Organization and enable all countries to prevent and respond to diseases.

The Kazakh leader proposed establishing an International Agency for Biological Safety based on the 1972 Biological Weapons Convention that would be accountable to the U.N. Security Council.

And he suggested creating a network of regional centers for disease control and biosafety under U.N. auspices.

Many leaders also called for any COVID-19 vaccine that is developed to be shared equally, with Sefik Dzaferovic, chairman of Bosnia’s three-member presidency, saying it must be available “to the entire mankind.”

Dzaferovic said the past few years have seen “a very strong crisis of multilateralism” at international organizations including the United Nations, which has become “an object of strong challenging and even dispute.”

But the pandemic has shown “their extraordinary significance in today’s globalized world,” he said, and has also shown that “the largest problems of today can no longer be solved by one, three or five states individually.”

As the global death toll from the virus approaches 1 million, many leaders spoke about how dramatically lives have changed in their countries.

Ghana’s Akufo-Addo said people everywhere have learned not to shake hands or hug loved ones, not to sing in groups because it’s become “a dangerous activity” and to worry about the safety of sending children to school.

And “for many people, the most difficult thing to deal with in these uncertain and unsettling times has been the silence forced on churches, mosques, temples and other places of worship,” he said.

COVID-19’s economic impact has been felt around the world, even in the tiny Pacific island nation of Palau that has remained coronavirus-free. President Tommy Remengesau Jr. said the pandemic is affecting the archipelago’s economy and has put the country of about 18,000 “into a level of isolation we have not known for many, many years.”

Palau is struggling with disrupted supply chains for food and medicine, getting life-saving treatments for patients who used to travel to larger countries as well as keeping families united, college students in school and people working.

“Private sector unemployment is approaching 50%, and it will take years to recover what we have lost in months,” Remengesau said.

The Palau leader, who said he will soon return to life as a fisherman, recalled attending the General Assembly’s high-level meeting in 2001, two months after the Sept. 11 terrorist attacks. He called then for the unity and cooperation it inspired to be nurtured.

“We do not see human evil in this pandemic in the way we did in the perpetrators of 9/11,” he said. “But the challenge of our response is not so different … to unite in the face of a shared crisis in a way that might have seemed unlikely a year or two ago.”

The pandemic also “has shone a crude light on inequality in the world,” said Honduran President Juan Orlando Hernández, a COVID-19 survivor.

Some nations, like Iraq, called for more assistance to flow to countries that have less than others.

Saudi Arabia’s King Salman, in the first address to the U.N. by a Saudi monarch since his father’s in 1957, said that as chairman of the Group of 20 major industrialized nations, the kingdom held a summit of its leaders in March and pledged $500 million “to combat this pandemic and curb its humanitarian and economic impacts.”

Reflecting a wish of all leaders, Iraqi President Barham Saleh said, “We pray to the almighty God that the next meeting can be held in a pandemic-free world.”