Canada’s Trudeau vows to do ‘whatever it takes’ in pandemic 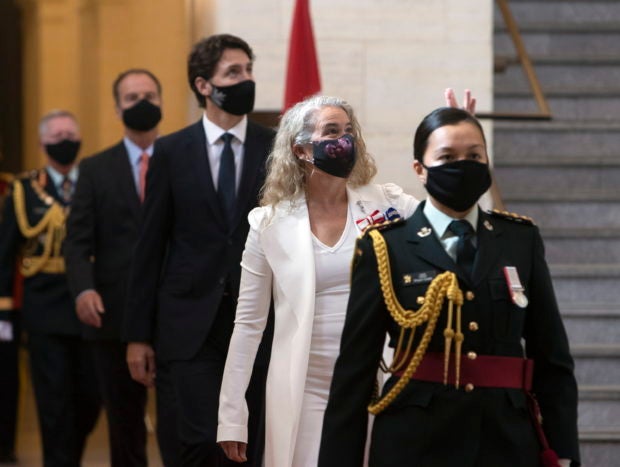 TORONTO  — Canadian Prime Minister Justin Trudeau’s government said Wednesday it will do “whatever it takes” to support the economy during the coronavirus pandemic as it presented the government’s priorities for a new session of Parliament.

If the three main opposition parties vote against the speech, which was formally delivered by Governor General Julie Payette, an election would be triggered. But at least one is expected to support the speech.

Two leaders of opposition parties could not attend the speech because they recently tested positive for COVID-19. Canada has seen a surge in cases in recent days.

The governor general called the pandemic the most serious public health crisis Canada has ever faced. Over 9,000 Canadians have died in six months and the government says the economic impact of COVID-19 on Canadians has already been worse than the 2008 financial crisis.

The government is extending the Canada Emergency Wage Subsidy to next summer. In the early days of the pandemic Trudeau announced businesses would be eligible for a 75% wage subsidy for their employees for businesses that have seen a 30% decrease in revenue.

The government says now is not the time for austerity.

“Web giants are taking Canadians’ money while imposing their own priorities. Things must change, and will change. The Government will act to ensure their revenue is shared more fairly,” the government said.

Payette delivered what’s called the Throne Speech as the representative of Queen Elizabeth II, who is head of state but holds a mostly ceremonial position.

Trudeau was scheduled to give a national address later Wednesday to talk about how the government will deal what many fear is a second wave of COVID-19 cases in the country.

Trudeau won reelection last year, but his Liberal party does not have the majority of seats in Parliament and must rely on at least one opposition party to stay in power.

It might be left to the leftist New Democratic Party to prop up the government after Conservative Opposition Deputy leader Candice Bergen said her party won’t support the speech.

New Democrat leader Jagmeet Singh said his party is going to take a long time to consider the throne speech to consider whether we are supporting it or not.”

Singh wants the Liberals not to reduce support for those who can’t go back to work and he wants a sick leave plan.

“I’m not looking for an excuse to go to an election,” he said. “I don’t want an election because I don’t think that will help people.”