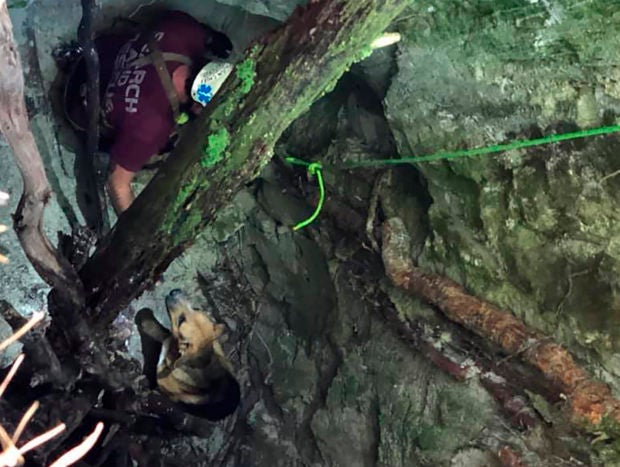 MORGANTON, N.C. — A group of mountain bikers on a North Carolina trail spotted a dog trapped 30 feet (9 meters) down in a sinkhole — and it took a salty snack and some straps to lift him to safety.

The group was riding the Sinkhole Trail at Pisgah National Forest, about 50 miles (80 kilometers) south of Asheville, on Sunday when they encountered the dog, who had apparently been stuck in the hole for several days, according to Burke County Search And Rescue.

The bikers called for help and led rescuers more than a mile to the stranded animal, where they rappelled into the sinkhole, enticed the starving dog with some beef jerky and raised him to safety using a harness, the rescue squad said.

The dog was not injured, but was starving and dehydrated, according to the rescuers.

He was taken to Burke County Animal Services for an examination and named “Sinker.” Officials said he did not have a collar or a microchip, and if owners are not found, he could be placed up for adoption.

The 7-mile (11-kilometer) trail is named for the large sinkhole along its ridge. IB

Snake lands on Mississippi woman as she opens her front door