Hair to the rescue as oil pollution blights coastlines 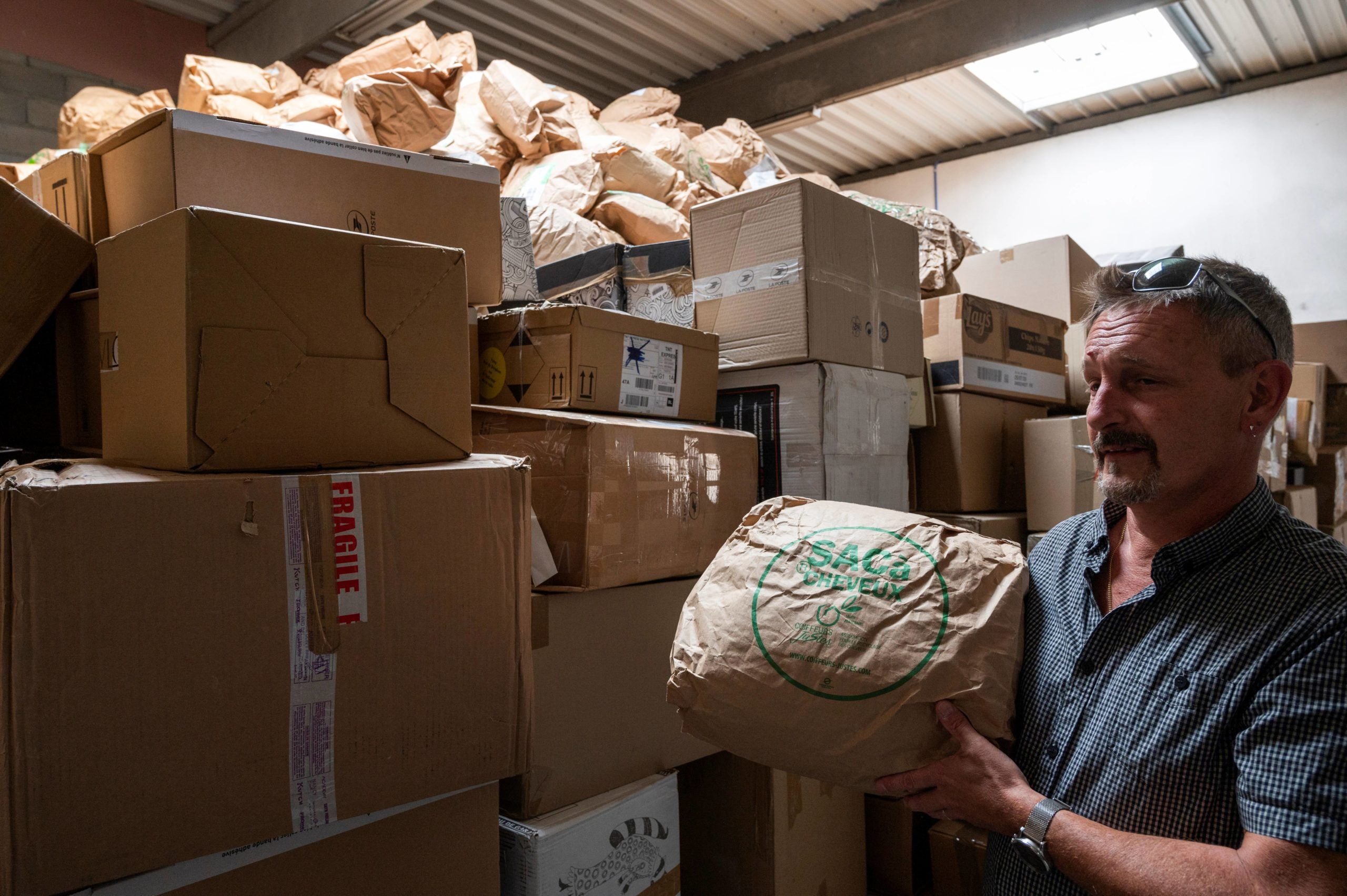 French hairdresser Thierry Gras and founder of the environmentalist and recycling association “Coiffeurs justes” (Fair hairdressers) holds a bag full of hair received from hairdressers in France, used to make hydrocarburant absorbent draft snake, at the association headquarters in Brignoles, southeastern France, on September 8, 2020. – From a hairdressing salon to the waters of a port in the Var, via a work integration company: instead of ending up in the trash, the hair cut by Thierry Gras is transformed into a sort of hydrocarburant absorbent draft snake to help clean up the Mediterranean sea. (Photo by Christophe SIMON / AFP)

BRIGNOLES, France — In the town of Brignoles in southeast France, 40 tons of human hair are stacked in a warehouse — discarded locks sent in from salons far and wide under an innovative recycling scheme.

After a successful trial in the nearby port of Cavalaire-sur-Mer, the hair is destined to be stuffed into nylon stockings to make floating tubes that will line harbors to mop up ocean oil pollution.

“Hair is lipophilic, which means it absorbs fats and hydrocarbons,” said Thierry Gras, a hairdresser in Saint-Zacharie near Brignoles and founder of the project Coiffeurs Justes (Fair Hairdressers).

Awaiting the green light from labor inspectors and anti-pollution officials, Gras hopes to start large-scale production of the tubes before year-end and so help fight against pollution.

He plans to sell the forearm-length tubes, which can each absorb eight times their weight in oil, for nine euros ($10.50) apiece.

At the Brignoles warehouse, paper bags are filled with two kilograms (4.4 pounds) of hair each, waste from thousands of participating hairdressers from all over France — including Gras’s own — as well as Germany, Belgium, and Luxembourg.

The bags are then sent to another site a few streets away, where formerly-unemployed people and school dropouts are paid to make the absorbent tubes.

Gras plans to reinvest half of the sale price of the tubes in the employment center.

According to the stylist, each hairdresser on average produces about 29 kilograms of hair waste every year, most of it ending up in the trash.

Last year, scientists found that discarded human hair was likely to blame for a strange phenomenon of missing toes among Paris pigeons. The birds appear to get entangled in the discarded locks, cutting off blood flow to their extremities.

While snipping away at a client’s hair, Gras told AFP his appetite for fighting pollution was awakened in childhood by the 1978 stranding of the Amoco Cadiz tanker off France’s Brittany coast.

For perhaps the first time ever, human hair was employed in the effort to mop up the more than 200,000 tons of spilled oil.

When he became a hairdresser later, Gras was shocked to discover there was no recycling facility for hair waste — which can also be used as fertilizer, isolation material, concrete reinforcement or in water filtration.

Gras thus came up with the idea of creating hair-filled oil absorbers, and in 2015 founded his association.

It has some 3,300 contributing salons to date.

The tubes, Gras explained, “can be used in case of a serious oil spill, such as the one in Mauritius recently, but the idea here is to remove micro-pollution on a continuous basis” in ports.

The Japanese-owned MV Wakashio ran aground on a coral reef off Mauritius on July 25, spilling over 1,000 tons of oil into a protected marine park boasting mangrove forests and endangered species.

Volunteers used makeshift sponges stuffed with straw and hair to try and suck up the oil until authorities stopped the practice.

In Cavalaire, a dozen tubes are already in use, serving as a pilot for the project.

Philippe Leonelli, the mayor of the seaside town and CEO of its port, is happy to have a new method for soaking up the oil leaked from the engines of some 1,100 boats docked in the port.

“The traditional method (using large sponges made from polymer) are products that are not reusable and which we discard” after use, he said.

The hair sponges, on the other hand, are washable and reusable “about ten times”.

“We are all in search of reusable methods so as not to overburden our territory and our land” with waste product storage, added the mayor.

Several river and ocean ports in France have already shown an interest in purchasing the tubes, said Gras.