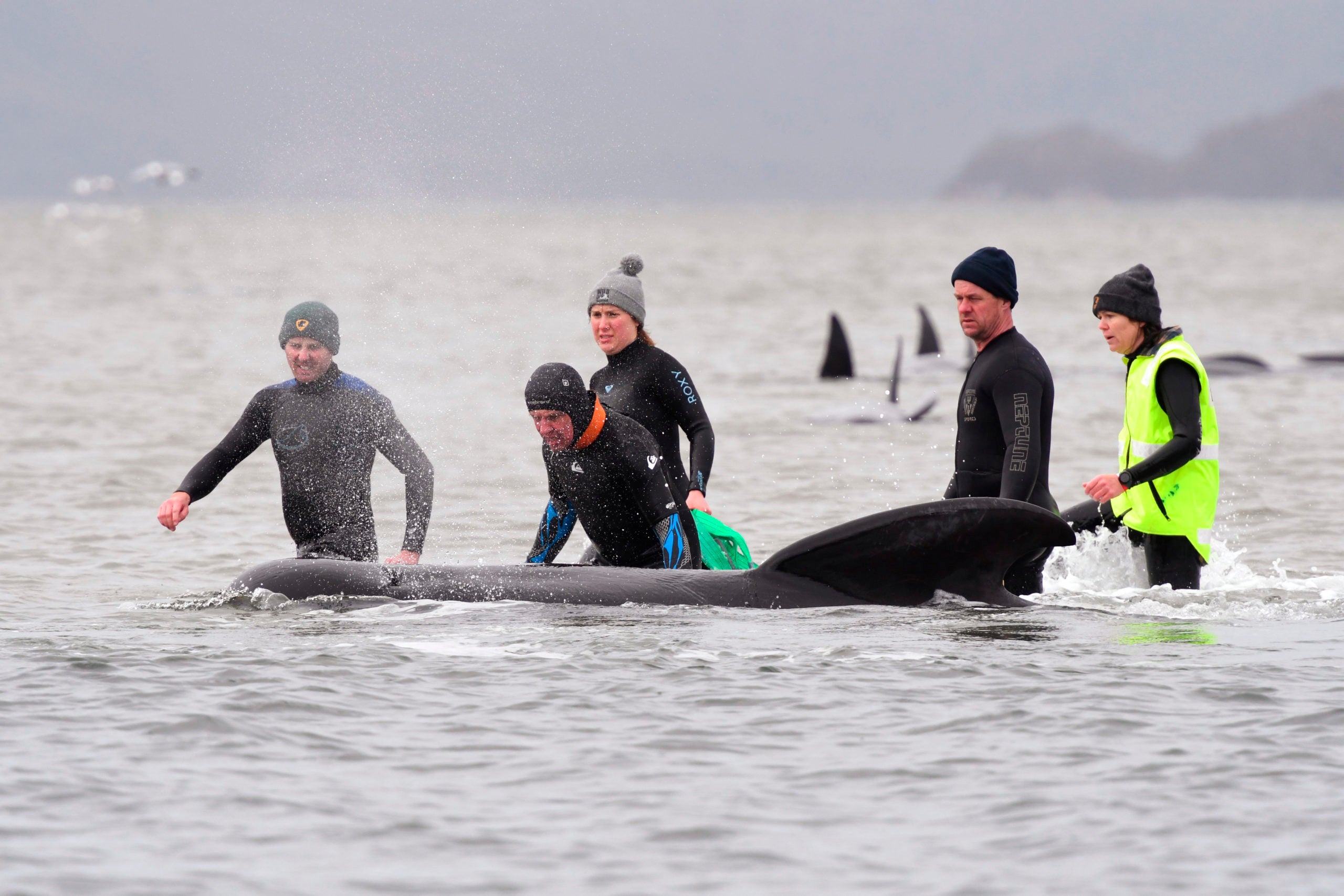 FILE – In this Sept. 22, 2020, file photo, members of a rescue crew stand with a whale on a sand bar near Strahan, Australia.
More pilot whales were found stranded on an Australian coast Wednesday, Sept. 23, raising the total to almost 500 in the largest mass stranding ever recorded in the island state of Tasmania. Authorities have been working to rescue survivors among an estimated 270 whales found on Monday on a beach and two sand bars near the remote west coast town of Strahan.(Brodie Weeding/Pool Photo via AP, File)

HOBART, Australia — More pilot whales were found stranded on an Australian coast Wednesday, raising the estimated total to almost 500 in the largest mass stranding ever recorded in the country.

Authorities had already been working to rescue survivors among an estimated 270 whales found Monday on a beach and two sand bars near the remote west coast town of Strahan on the island state of Tasmania.

Another 200 stranded whales were spotted from the air on Wednesday less than 10 kilometers (6 miles) to the south, Tasmania Parks and Wildlife Service Manager Nic Deka said.

“From the air, they didn’t look to be in a condition that would warrant rescue,” Deka said.

“Most of them appeared to be dead.”

Further assessment of their condition would be made by boat and crews would be sent if the whales could be saved, he said.

About 30 whales in the original stranding were moved from the sandbars to open ocean but several got stranded again, Deka said.

About a third of the first group had died by Monday evening, and an update on the death toll and condition of survivors was expected later Wednesday.

Tasmania is the only part of Australia prone to mass strandings, although they occasionally occur on the Australian mainland.

Australia’s largest mass stranding had been 320 pilot whales near the Western Australia state town of Dunsborough in 1996.

The latest stranding is the first involving more than 50 whales in Tasmania since 2009.

With cool weather helping, “we’ve got a very good chance of getting more off that sandbar,” he added.

In neighboring New Zealand, more than 600 pilot whales washed up on the South Island at Farewell Spit in 2017.