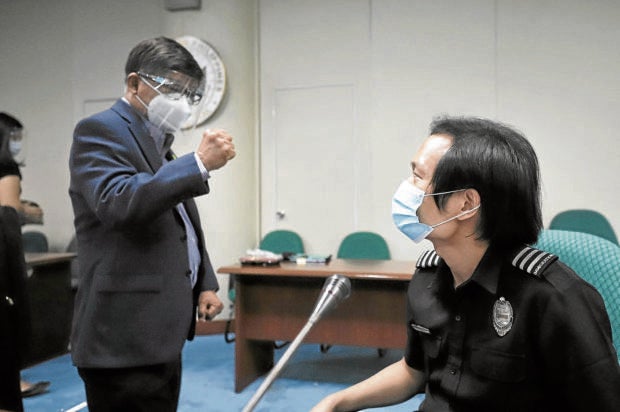 The “bosses” of a “syndicate” of corrupt immigration officers who allow foreign, mostly Chinese, visitors planning to work in the country illegally to pass through the airport for a fee are apparently escaping prosecution, according to the whistleblower of the alleged multibillion-peso “pastillas” escort racket.Immigration Officer Allison “Alex” Chiong on Tuesday told a Senate hearing that the 19 immigration officers recommended to be prosecuted for graft by the National Bureau of Investigation before the Office of the Ombudsman early this month did not include those allegedly running the racket.

He said the leaders of the pastillas scheme that he knew of were Red Marinas, former chief of the Ports Operation Division, and his subordinate, Erwin Ortañez, chief of the Travel Control and Enforcement Unit (TCEU).

Under Ortañez were Glen Comia, Bien Guevarra and Danieve Binsol, who handled Terminals 1 to 3 of Ninoy Aquino International Airport, he said. Their deputies were Billy Cadang, Anthony Lopez and Arlan Mendoza, he said.

None of them were included in the NBI case in the Ombudsman, Chiong said.

“They are the bosses. The bosses hold positions in TCEU because TCEU is the one in control. That is the backbone of the syndicate,” he said.

Sen. Risa Hontiveros, who led the hearing as chair of the Senate committee on women, children, family relations and gender equality, had earlier estimated that up to P10 billion in bribe money greased the hands of corrupt immigration officers and private tour operators since the early part of the Duterte administration.

Under the “pastillas scheme,” which Chiong exposed to the Senate early this year, each Chinese national traveling as a tourist but who intended to work for Philippine offshore gaming operators (Pogos) pays a P10,000 “service fee” for a smooth entry into the country.

The scheme acquired such a label because the bribe money was rolled in a white piece of paper looking like the Filipino milk candy.

Hontiveros called on the NBI to make sure the masterminds in the racket, which is used also for human trafficking and prostitution, were held accountable.

“For the sake of our women and children, the masterminds of this pastillas scam must be put behind bars,” said Hontiveros. “The big fish have not been caught. We can’t just go after the small-time players while the big-time players are enjoying their lives.”

Chiong’s testimony in the Senate on Tuesday came a day after the NBI arrested Joshua Paul Capiral, the head of its Legal Assistance Section, for alleged bribery and extortion of several individuals who were implicated in the racket.

This prompted Senate Minority Leader Franklin Drilon to call for a top-to-bottom revamp of the Bureau of Immigration (BI).

“It only gives credence to the allegation of Mr. Chiong that the BI personnel who were not charged could in fact be guilty, because of the cover-up [as] shown by this shocking revelation,” Drilon said.

“There is clear suppression of evidence,” he added. “The people in BI are thick-faced. They’re being investigated and they’re paying bribes to be excluded from the case.”

He also said the Senate should consider recommending the suspension of the visa-upon-arrival program as it had given rise to the pastillas scheme. The program is suspected to have been used as a way around immigration and labor laws, he noted.

NBI Special Action Unit (SAU) chief Emeterio Dongallo Jr. said Capiral, who was arrested at his office by SAU agents, had asked for an initial P200,000 from an immigration officer “in exchange for favorable outcome.”

Dongallo said the immigration officer was among the 19 the NBI had charged with graft.

Capiral allegedly worked with his brother, Immigration Officer Christopher Capiral, to extort money from the immigration officers. They are both currently under the custody of SAU.

Cases prepared by the NBI are evaluated by its legal department before they are filed in the courts or the Department of Justice. As head of the Legal Assistance Section of the NBI Legal Division, Capiral could recommend who to include and exclude in a criminal case, but his recommendation may not be totally accepted.

“We received information about four weeks ago [about this activity]. But before we could file the pastillas case, [our unit] felt that there have been unusual developments in the evaluation period. First, the filing was delayed for months, and then we were told the evidence was weak,” Dongallo said.

He said his unit was planning to charge as many as 37 individuals, but Capiral wanted to recommend charges against only four.

“We worked hard on the case buildup of this sensational issue … so we were wondering why [this person] in the legal division was working as if he was the lawyer of those implicated officers,” he added.

Capiral allegedly claimed that he could exclude the names, reduce the charges, or dismiss the cases of those under investigation for an initial P100,000, Dongallo said.

The amount could go up, depending on the evidence, the SAU chief said.

Part of Capiral’s “sales talk” was that he was able to “fix” big cases and that he could access the cases because he was well connected, Dongallo said.

The NBI is going to “dig deeper” into the cases handled by Capiral and look into possible collusion of other bureau employees, he said.

Asked how Capiral’s arrest would affect the pastillas racket case, Dongallo said it was possible that another set of charges would be filed.

Janet Francisco, chief of the NBI’s Anti-Human Trafficking Division, told the Senate that SAU had pending investigations of other parties that may be involved in the pastillas scheme.

In a statement on Tuesday, Immigration Commissioner Jaime Morente welcomed the arrest of Capiral’s brother “who was allegedly fixing cases of those involved in the pastillas scheme.”

“Rogue employees that are involved in corruption only smear the name of the bureau, and should face harsh penalties,” he said.

The immigration chief also said he supported the senators’ recommendation to reorganize the bureau and suspend all of those involved in the escort scheme.

“In fact, we have already relieved the names [of immigration officers] that were mentioned in the hearing, as well as implemented a system-wide reorganization,” Morente said.

A total revamp of airport personnel, all terminal heads and all TCEU heads was implemented earlier this year, and the chief of the Port Operations Division was sacked, he said.

He said the visa-upon-arrival policy had been suspended since January in an effort to curb the entry of more COVID-19 cases. —WITH A REPORT FROM TINA G. SANTOS INQ