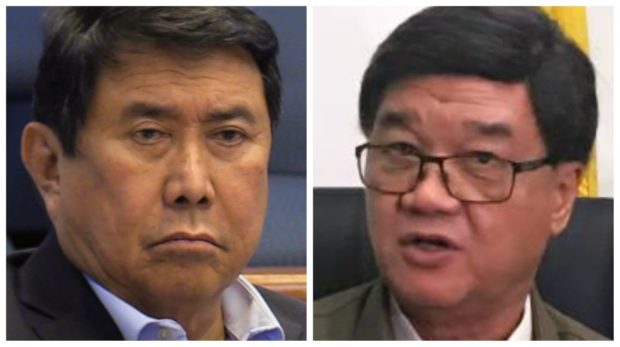 MANILA, Philippines — Former Justice Secretary Vitaliano Aguirre reiterated on Tuesday that he was not receiving kickbacks from the alleged “pastillas” modus at the Bureau of Immigration (BI), and even questioned his accuser, columnist Ramon Tulfo, why he would use a helicopter to receive the supposed cash.

“Assuming for the sake of argument that I was receiving part of the said payola, why would I let my share be flown from Manila to Mulanay, Quezon, by a chopper? This manner would not only attract attention from the people of said small and remote town but also would alarm my political enemies,” Aguirre told the Senate committee on women, children, family relations, and gender equality that was conducting a hearing on the alleged “pastillas” racket.

(If what you were saying is true, Mr. Tulfo, should I not hide it so that people would not see it? But it’s the other way around. You are making me look like a stupid DOJ secretary that I would even display the bribes I supposedly received.)

Mulanay in Quezon province is the hometown of Aguirre.

In a February 25 column, Tulfo quoted whistleblower and BI officer Allison Chiong as saying that a top official is receiving his “share of the loot” of the “pastillas” scheme, or the alleged illegal airport escort service catering to Chinese nationals, via a chartered helicopter from Manila. It was in March when Tulfo said during a Senate hearing that he was referring to Aguirre.

But Aguirre noted that the photo of a helicopter shown during the March 2 hearing was merely presented to Chiong “for the purpose of identifying the persons appearing therein.”

“He (Chiong) never said that the chopper was bound for Mulanay, Quezon,” said Aguirre.

Marc Red Mariñas, former BI deputy commissioner and chief of the bureau’s Ports Operation Division, earlier admitted that he was one of the persons in the picture taken February 2 but clarified that they went to San Narciso, Quezon that day for the feast of the town. Aguirre said this disputes the claim of Tulfo that the chopper flew to Mulanay to deliver the share of kickback from the “pastillas” scheme.

Aside from this, Aguirre said he was also at the Manila Hotel for a speaking engagement on that date so he could not possibly receive the money in Mulanay.

During the hearing, Tulfo showed the same picture of a yellow helicopter carrying Mariñas and his staff assistant Fidel Mendoza, and a certain Burgos Bariata supposedly on their way to Mulanay. Tulfo alleged that Bariata is the bagman of Aguirre.

Tulfo also showed pictures of two other helicopters, colored white and black, and vehicles which he said were also being used by BI personnel to go to the town.

He claimed that relatives of Aguirre even go for a “joyride” whenever the yellow helicopter lands at Mulanay.

Aguirre admitted that he knows Bariata but denied that he was his bagman.

“Kababayan ko po ‘yun (He hails from the same town). Not because he is in the helicopter, bagman ko po ‘yan (he is already my bagman),” the former Justice chief added.

(You know what, Mr. Tulfo, that’s not how you accuse a person. You should present someone instead of giving pure hearsay from my political rivals in Quezon and Mulanay. What do your pictures prove? Where are the pictures of cash there?)

Towards the end of the hearing, the exchange of responses between Aguirre and Tulfo, who admitted to being former friends, even turned personal as the columnist called Aguirre “stupid.”

“Madame chair, sinungaling ‘yan. That’s it. Kaya nga siguro inalis ni Pangulong Digong ‘yan dahil bobo ‘yan (Madame chair, he’s a liar. That’s it. Maybe the reason why he was removed by President Rodrigo Duterte is that he is stupid),” Tulfo said, addressing committee chair Senator Risa Hontiveros, who had to repeatedly remind the two of addressing her as chair instead of directly talking to each other during the hearing.

Aguirre, who said even a Grade 1 student would not believe the “evidence” showed by Tulfo, denied that President Rodrigo Duterte had asked him to resign.