Nude food delivery biker let off with a fine 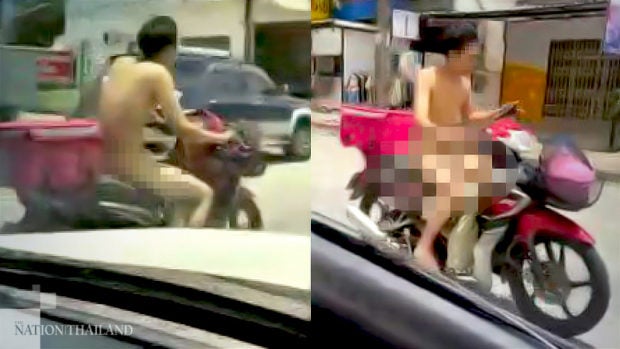 BANGKOK — A food deliverer seen riding his motorcycle without clothes in Songkhla province, Thailand reported himself to police on Monday (September 21).

On Monday, a video of a naked man riding a motorcycle with a food delivery bag behind was shared via social media. The incident took place on Kanchanavanich Road.

However, the video was later deleted.

Reporters visited the nearby areas where the naked man was seen. A local trader said that the sight of the man was unbearable, and she would not eat food delivered by him.

A taxi biker named Bai Aumaoom, aged 66, said that he saw the man park his motorcycle in front of Hua Pom Nok Temple. Then he took off his clothes and walked around, and later rode off on his motorbike.

The biker also mentioned that the naked man later returned to the temple, walked around, and finally wore his clothes before leaving.

On the same day, the suspect reported himself to local police. His name was Botsin Dueanchamroon, aged 24. He was fined by Bt500 (P771) for being naked in public.

The man claimed that he decided to be naked that morning due to his personal problem.