CANBERRA, Australia — A humpback whale has found its way back to sea weeks after it got lost in a murky, crocodile-infested river in northern Australia.

There have been no previous recorded sightings of whales in the remote East Alligator River in the Northern Territory’s World Heritage-listed Kakadu National Park, and no one can explain why at least three of the blue water mammals ventured so deep inland in a river with little visibility. 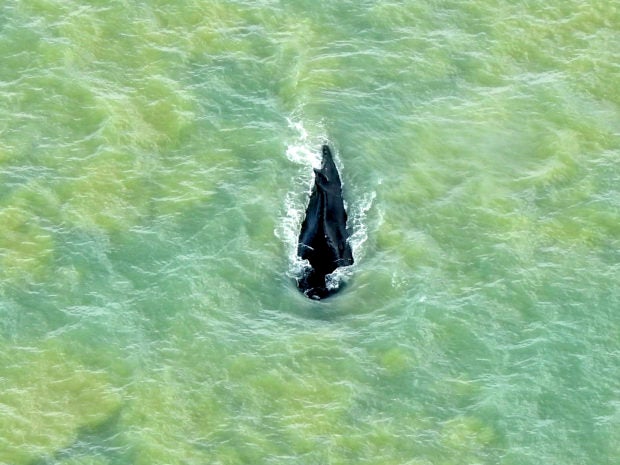 In a more common phenomenon, scores or perhaps hundreds of pilot whales were reported on Monday stranded on a sandbar off Australia’s southern island of Tasmania state.

In northern Australia, the last of the humpback whale trio managed to navigate its way through shallow channels at the broad river mouth and back into Van Diemen Gulf over the weekend, Kakadu National Park manager Feach Moyle said.

“It made its way out on the high tides and we’re pleased it appeared to be in good condition and not suffering any ill effects,” Moyle said.

Humpbacks follow the western Australian coast in their annual migration from the tropics to Antarctica.

“He or she looked really relaxed, was cleaning all the mud off itself actually, and we were just so relieved that this whale had actually made itself out of the East Alligator River,” Palmer said.

A group of recreational sailors first spotted the lost trio on Sept. 2 more than 20 kilometers (12 miles) from the river mouth.

Two of the whales had disappeared before wildlife authorities arrived a week later.

“Hopefully, they’re on their way or he or she is on their way to Antarctica, that it’s calling out for its friends and it catches up with them, because now is the time when all our humpback whales in the Northern Territory waters actually start to head to Antarctica,” Palmer said. “And knowing that these guys haven’t fed for months and months and months, so they’d be pretty hungry and they do the final 5,000-kilometer (3,000-mile) trip to Antarctica. So we’re hoping all that works out, for sure.”

It was a mystery why a whale would stray so far up a shallow river full of crocodiles. “It could have been chased up by some big sharks, or maybe it was just a wrong turn,” Palmer said.

Marine ecologist Jason Fowler was among the sailors aboard a catamaran who first saw the whales in a relatively deep river bend. By the time government scientists responded, the remaining whale had moved downstream to a stretch of the river only 4 meters (13 feet) deep.

“It was coming up with mud all over it,” Fowler said.

Despite the river’s name, there are no alligators in Australia. It was named after the river’s many crocodiles by European explorers who apparently couldn’t tell the difference.

Authorities thought the whale was too big to be attacked by crocodiles unless it became weak or sick.
Off Tasmania, the state government said a pod of around 70 whales had become stranded near the west coast town of Strahan.

Guy Grining, a Strahan local who flew over the scene in a helicopter, estimated that 250 whales were stuck on sandy shoals.

Government marine conservation staff have been deployed to the scene to attempt to rescue the whales.

“It’s a terrible situation,” wildlife scientist Vanessa Pirotta told Australian Broadcasting Corp. “To see a stranding like this is not unusual. It just doesn’t happen every day.”