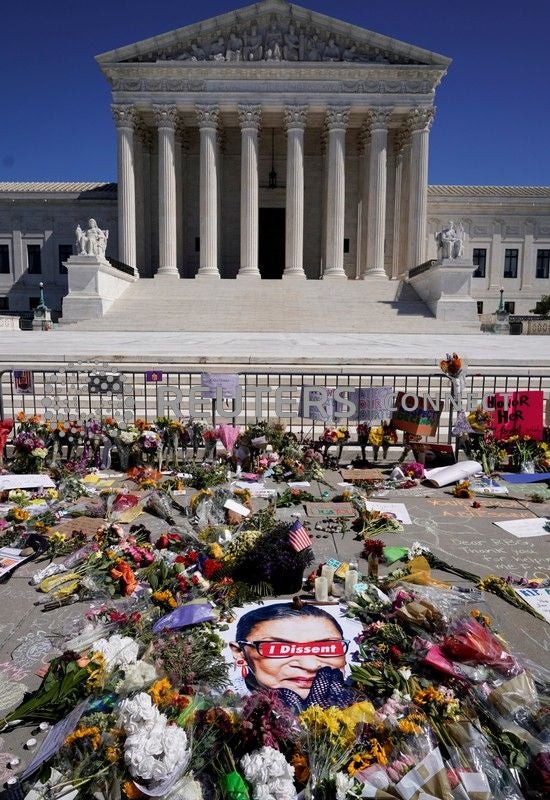 WASHINGTON — Flags on the U.S. Supreme Court’s front plaza will be flown at half-staff for 30 days in honor of Justice Ruth Bader Ginsburg, who died on Friday, the court said, adding that a black drape has been hung over the doors to the courtroom.

In a statement on Sunday, the court said Ginsburg’s bench chair and the bench directly in front of it have also been draped in black wool crepe as part of the tradition for the death of a sitting justice.

Visitors to the Supreme Court have left flowers and signs in tribute of the stalwart liberal and feminist icon, many with young children in tow. Mourners heralded Ginsburg’s groundbreaking legal career and expressed dark worries about the country’s direction.

Americans have gathered at makeshift memorials around the country to mourn the death of Ginsburg, as President Donald Trump signaled his intention to fill the vacancy weeks before a heated election.

The death of Ginsburg, who was on the Supreme Court since 1993, has upended the November election contests, energizing both Trump’s conservative base and presenting new complications in the battle for control of the U.S. Senate.

Democratic presidential candidate Joe Biden on Sunday urged Senate Republicans not to vote on any candidate nominated to the Supreme Court as the Nov. 3 election approaches, calling Trump’s plan an “exercise of raw political power.”

Such an appointment by the president, if approved by the Senate, would cement a 6-3 conservative majority that could influence American law and life for decades.