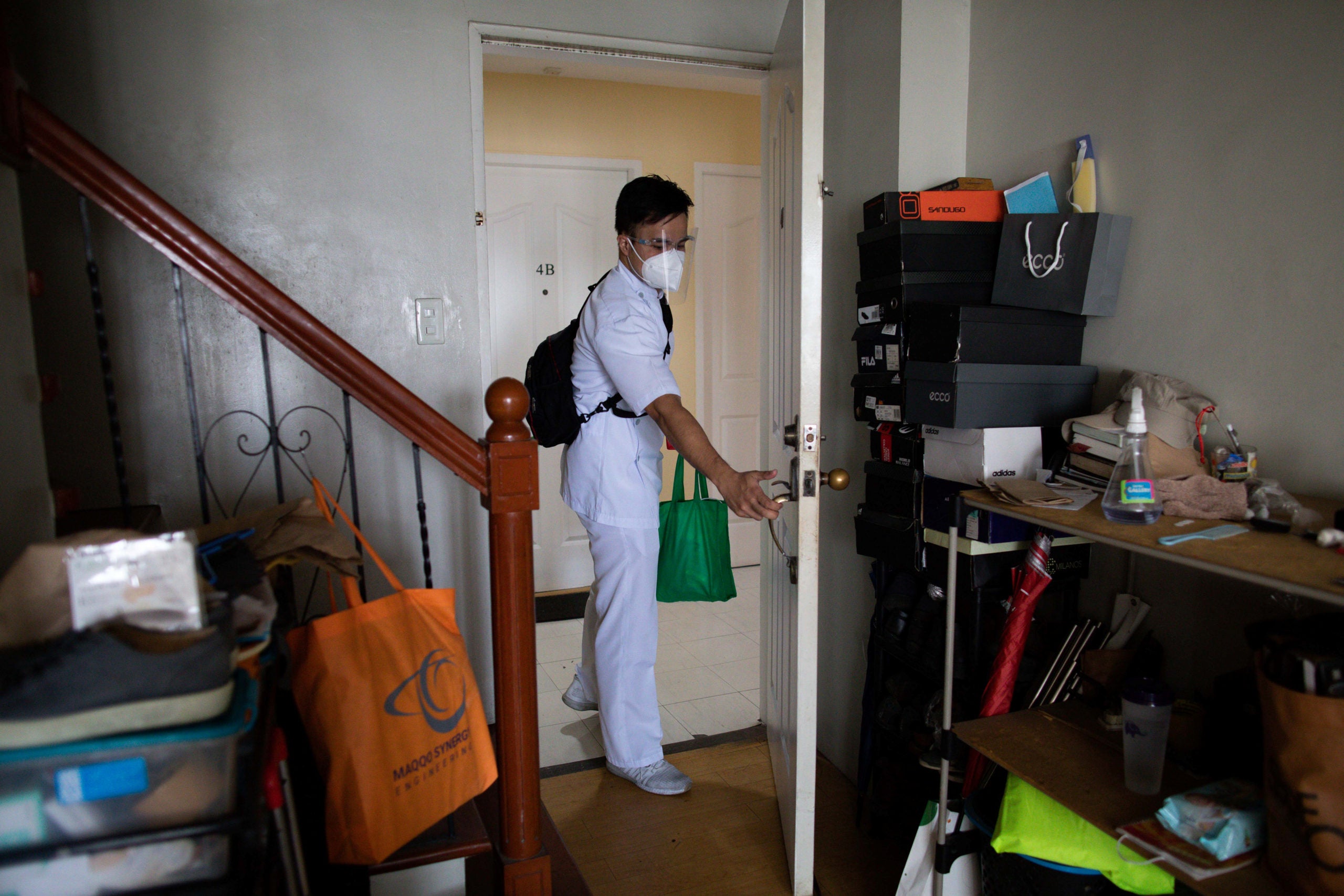 Jordan Jugo, a nurse prevented from leaving the Philippines by a government restriction on health workers’ movements, sets off for work in a Philippine hospital from the apartment he shares with two roommates, in Mandaluyong City, Metro Manila, Philippines, September 4, 2020. “It seems (the government) doesn’t really value our contributions. It hurts”, he said. Picture taken September 4, 2020. REUTERS/Eloisa Lopez

MANILA, Philippines — “Time is running out” for Filipino nurses who have been accepted to work in German hospitals but are held back in the Philippines because of  the government’s deployment ban on healthcare workers (HCWs).

“Time is running out for around 1,075 Filipino skilled nurses who have been accepted for work in German hospitals and are stranded in the country due to the deployment ban on health workers by the Inter-Agency Task Force on COVID-19 since April 2, 2020,” recruitment and migration expert Emmanuel Geslani said in a statement Saturday.

Geslani said the finances of these nurses “have virtually dried up” as they have been out of work for the past two years and were likewise out of the national healthcare system in preparation for their job offers in Germany.

He added that their German language proficiency is also slowly going down, even as their employers who have funded their language studies have sent allowances to the nurses to help them tide over while awaiting the lifting of the ban.

“The nurses have been studying the German language for the past year and have been issued visas for Germany. However, with the onset of the deployment ban for HCWs, the nurses could no longer pursue their travel,” Geslani out.

He also noted that the Philippines and Germany have a government-to-government agreement for the deployment of skilled and qualified nurses to Germany with the participation of the private sector.

In Germany, nurses earn at least 2,700 Euros monthly, which is equivalent to nearly P160,000, according to the recruitment expert.

Citing information from the Philippine Association of Service Exporters, Inc., Geslani said there are about 4,000 Filipino nurses bound for Germany, the United Kingdom, the Netherlands, and Canada  who are ready to be deployed once the government lifts the ban.

“The 1,075 German-bound nurses who have been given the opportunity to earn well for their families are waiting and praying that the government will lift the deployment ban to allow these nurses to seek a better future for themselves and their families,” he added.

According to Philippine Overseas Employment Administration administrator Bernard Olalia, the average annual deployment of the country is about 14,000 to 15,000 nurses bound to all destination countries, with the Kingdom of Saudi Arabia, United Kingdom, and Germany as preferred labor markets.

“Since we have been allowing exemptions for those with contracts dated March 8, the affected nurses if IATF allows the proposed Aug 31 to be the new cut off date is about 1,200 nurses only,” he told INQUIRER.net.

“For Germany-bound nurses, there are two tracks of deployment- G-to-G (government-to-government) and agency hire, so 1,075 may be the projected figure but of course subject to an actual number of verified employment contracts,” he added.

Labor Secretary Silvestre Bello III previously recommended to the government’s COVID-19 task force to exempt nurses who have completed their requirements as of August 31 from the deployment ban on healthcare workers.

Currently, only health workers who have secured contracts and travel documents as of March 8 this year can leave the country to pursue jobs abroad.