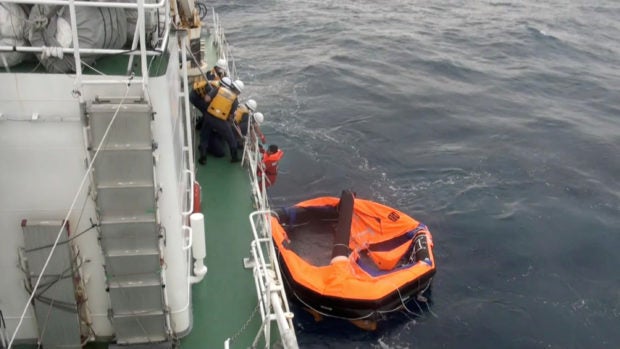 A Filipino crew member of Gulf Livestock 1, a cargo ship carrying livestock and dozens of crew that went missing after issuing a distress signal due to Typhoon Maysak, is rescued by Japan Coast Guard crew onboard the vessel Kaimon at the East China Sea, to the west of Amami Oshima island in southwestern Japan, in this still image taken from video September 4, 2020. Courtesy 10th Regional Coast Guard Headquarters – Japan Coast Guard/Handout via REUTERS

MANILA, Philippines — The Department of Labor and Employment (DOLE) vowed to extend full support to the two rescued Filipino crewmen of the ill-fated cargo/cattle ship that sank off southern Japan earlier this month.

The same support will be extended to the families of the missing Filipino seafarers and the lone recovered fatality.

“They will get help from the government in the form of livelihood assistance and other benefits,” Labor Secretary Silvestre Bello III said in a statement Sunday.

“We are also looking at possible job opportunities for them in other shipping companies in case they want to get back at work as soon as possible,” he added.

The DOLE has already started coordinating with foreign employers who are in need of overseas Filipino workers, according to Bello.

Bello said chief officer Eduardo Sareno and deck crew Jay-nel Rosales were flown home from Tokyo via Philippine Airlines on Saturday after undergoing medical check-ups and spending weeks in quarantine in accordance with health protocols in Japan against the coronavirus disease.

The two are awaiting their COVID-19 test results before travelling to their hometowns.

Sareno and Rosales were rescued by the Japanese Coast Guard after the Panamanian-registered Gulf Livestock 1 went missing on September 3 and is said to have capsized after experiencing engine trouble in high seas at the height of Typhoon Maysak.

Meanwhile, the remains of crewman Joel Canete Linao who was also rescued from the waters but died while being treated at a hospital were flown home on Friday.