MANILA, Philippines — The spokesperson for the Philippine General Hospital (PGH) believes that his 13-day confinement there for COVID-19 has not only given him a “deeper understanding” of the disease but also made him “a more sensitive doctor.”

Thus, Dr. Jonas del Rosario said, his updates to the media would no longer be mere “statistics,” and he would not treat patients’ complaints like chest pains, headaches and anxiety as mere matters of course.

“Being hospitalized as a patient has allowed me to have a deeper understanding of how to be one. Now that I also went through how they feel, I’d probably be a more sensitive person, a more sensitive doctor, now that I have firsthand experience…” Del Rosario said in an online interview.

Before then, he said, he just looked at the numbers: How many have been admitted to the PGH, to the intensive care unit (ICU)?

Del Rosario specializes in pediatric cardiology, but during the early days of the pandemic, he decided to join the PGH “as part of operations.” Now its spokesperson, he advocates plasma donations from recovered COVID-19 patients and entertains donors, and represents the hospital in speaking engagements.

He also spends much time with front-liners. Sometimes they will approach him before they do the hospital director, “so I am like a sounding board of a lot of people,” he said.

Shortly after his discharge, Del Rosario made a list of “things I want the PGH to improve on.” It helped that even before he fell ill, he was being asked about his observations on the hospital’s service.

A major highlight in Del Rosario’s notes was the front-liners’ intense work burden.

“I now understand it more when the front-liners said, ‘We need more time, rest and reinforcement.’ From wearing PPE (personal protective equipment) to taking care of patients, they are really overworked. Napakahirap po ng ginagawa nila,” he said.

Del Rosario was looking after his parents—father Bonifacio, 90, and mother Carmelita, 85, both COVID-19 patients at the hospital—when he folded under the physical demands and emotional pressure of looking after them while busy at his job.

He brought his father to PGH on July 11 after noting the old man’s week-old cough and low-grade fever. A swab test showed his father positive for the new coronavirus.

“I’d go to the hospital at lunch time, don PPE, give my father lunch, go to my office. Around 6 p.m. I’d bring him dinner and make sure he’s tucked in and ready to sleep,” Del Rosario said.

His mother, who was being treated for severe COVID pneumonia, was intubated and sent to the ICU. “We couldn’t even hug,” the son said.

“Two weeks into what I was doing, I eventually felt shortness of breath. It was very tiring, I was also getting drained emotionally. My parents were not getting better and the worry was getting bigger—that [possibility] of my parents not making it,” he recalled.

Del Rosario joined his parents in the hospital ward for COVID-19 patients and personally learned of the daily ordeal of front-liners:

“They can spend so much time with just one patient, and their concern is that they might bring the disease to their homes. I was able to talk to them, like the medical technologist who drew blood from me, the nurse bringing my medicines, somebody who took my ECG (electrocardiogram), a nursing aide shampooing my hair…

“I probably wouldn’t have had the chance to physically talk to them and hear their concerns and observe them [had I not been confined]. I used to appreciate them, but now, we really need to thank these people—from technicians to nurses to doctors, the men and women who put their lives on the line just to take care of COVID-19 patients. Because of my personal experience, I can now appreciate their work, mga reklamo nila, their worries.”

It’s ironic that Del Rosario, as PGH spokesperson, holds a job that requires him to “inform the public what to do in terms of not getting the illness or what to do if you already have it.”

When the government first eased community quarantine restrictions, Del Rosario said, his father started going out “to attend to businesses, checking on apartment units to make sure they are fine, checking on employees, property. And my dad was someone very sociable. It was hard for him to stay [put]. He was stubborn, matigas ang ulo.”

He suspects that his father got the coronavirus “from the community, and then he was the first one to become symptomatic with cough and fever. Nahawa na lang si Nanay.” (Carmelita tested negative the first time her son collected swabs from them on July 11.)

Del Rosario was still ailing when his father died on Aug. 8. The son managed to leave his sickbed, don PPE and say goodbye before his father’s body was taken to the morgue.

“I whispered to him that I was sorry I could not save him. That was very traumatic to me, so painful,” Del Rosario said. 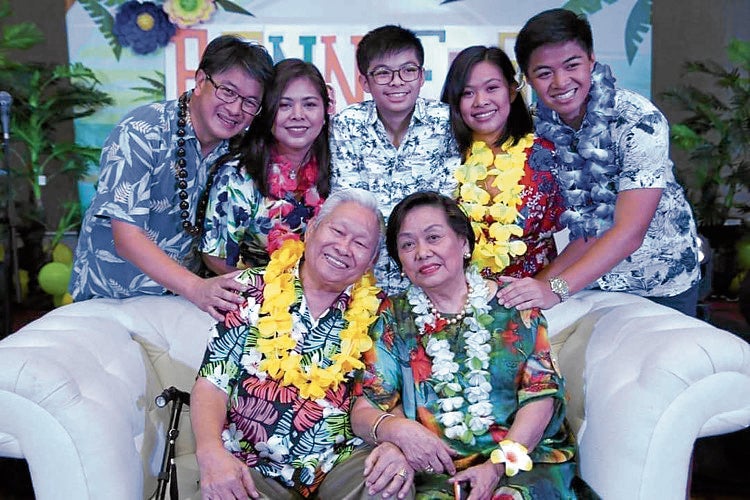 TEARS IN HEAVEN UP-PGH spokesperson Dr. Jonas del Rosario (standing, left) lost parents Bonifacio, 90 (seated, left) and Carmelita, 85, (right) within a month, just a few weeks after both were found positive for coronavirus. The doctor also got infected but later recovered.With them in the photo are Del Rosario’s wife Pinky and children Javier, Angela and Jared. —CONTRIBUTED PHOTO

He said his parents’ illness was a reminder that the elderly remained “a vulnerable population” in this pandemic: “We have to protect them. We really have to stress the fact that if there are people who should be singled out to be on quarantine or lockdown, it’s the elderly. Especially if they have comorbid conditions and their immune system is not strong enough to be able to overcome this disease.”

Del Rosario wished he had been “stricter to my dad” and prevented the old man from going out on the basis of reports of elderly people getting infected and eventually hospitalized. “My dad and mom were both diabetics and had hypertension. They actually suffered from other complications of COVID-19. Both of them had overwhelming bacterial infection brought about by the disease that they could not get rid of,” he said.

Del Rosario’s mother, a Marian devotee, passed away on Sept. 8, the birthday of the Blessed Mother.

Carmelita had a difficult time delivering him, and he was a very sickly child. When he was in grade school, there were times when she stayed on campus to change the towel on his back and make sure it stayed dry.

Del Rosario said it was his mother who encouraged him to become a doctor.

He recalled: “A day before she passed, I dreamed there was a butterfly hovering around me. And on the day she died, I dreamed she was at the foot of my bed, smiling and saying, ‘OK na ako, I’m home.’”

“The funny thing about dreams is you usually don’t remember them. But now it’s clear to me that she appeared to me to tell me she was OK,” he said.

Minutes before his mother’s death, Del Rosario was speaking at an online recollection that had Cardinal Luis Antonio Tagle among the guest speakers.

“My faith at that time was very wobbly. I would question God every now and then: Why are You taking my parents away? Sabi nga nila, we cannot really understand God’s will. My question to the Cardinal: What is the meaning of this?” he said. “Cardinal Tagle said it is right to search for answers, to look for the significance of what happens in one’s life, ‘but you don’t have to hurry. It’s not like a Q&A na kapag tinanong mo, nandyan na agad ang sagot. Eventually the answer will come to you.’”

Just as Del Rosario’s talk was about to end, he got word from the hospital staff that his mother had died. Cardinal Tagle immediately offered prayers for her.

Shortly after seeing his mother one last time, Del Rosario was composing a poem in Filipino for her in his head.

Carmelita loved the Filipino kundiman and romantic stories and apparently passed this on to him, the doctor said.

He said it took him only 10 minutes to write his 15-line tribute. It speaks of his love for his mother, her devotion to the Blessed Mother, his appreciation of her maternal sacrifices. and how much he misses her.

It has been more than a week since Del Rosario shared with Cardinal Tagle the pain of his parents’ demise.

Hold on to faith

“The only thing I could think of was that obviously, I have to hold on to my faith. This trial, is this a way of God telling me something? That this [holds] something bigger? Does He want to use me because of this painful experience, that I would reach out and talk to people?” he said, adding:

“I realize life is so fleeting. Relationships do matter; you have to take advantage of the time, you have to make sure your loved ones know you care for them. COVID-19 isolates people. It’s really a very lonely disease.”