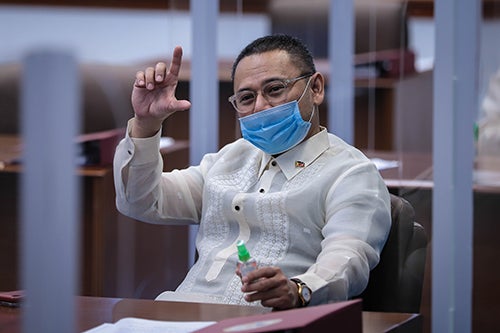 Sen. Sonny Angara raises his hand to show that he is physically present during the roll call. The Senate opened its 2nd Regular Session of the 18th Congress Monday, July 27, 2020 (Henzberg Austria/Senate PRIB)

Angara, who is the chairman of the Senate Committee on Finance, said this during the hearing for the proposed P11.17 billion budget of the National Economic and Development Authority and its attached agencies for 2021.

He said that the Philippine Statistics Authority, the NEDA attached agency that will handle the registration, should complete the registration before President Rodrigo Duterte ends his term in 2022.

Karl Kendrick Chua, the Acting Socioeconomic Planning Secretary, said that a total of five million Filipinos from low-income households would be registered this year and another nine million would be pre-registered.

NEDA predicts that 42 million would be registered in 2022 and another 24 million in 2023 to complete the procedure.

Chua noted that P2 billion in funding for implementation of national ID registration, in compliance with Republic Act 11055, was provided in 2019 but this was not obligated until early this year.

Angara said that the legislative branch of the government is ready to assist PSA if the need arises, but NEDA has to set a definite deadline for the completion of all the procedures involved.

“What is the finish line for NEDA on this? Provide us all the details because we want to separate the forest from the trees. We in Congress are willing to help you but we don’t want to see a bottomless pit,” said Angara.

Registration will start in the fourth quarter of 2020 and would be in full swing by 2021 with PSA handling the process.

Chua said that NEDA has been requested to complete the registration before the end of Duterte’s term and that the timelines have already been adjusted to meet the deadline.

The PhilSys ID, Chua said, will be the single source of identification of a Filipino citizen and a unique number will be assigned to the individual that will then be reflected in all other functional IDs such as passports and drivers’ licenses.

Angara said that a PhilSys ID would allow for better distribution of financial assistance to the public who are in need of aid under the Bayanihan 1 Act.

“The PhilSys ID would make it easier for Filipinos to open bank accounts, as well as for other transactions, both government and private,” said Angara in a statement Saturday. “This is in line with our push for cashless, paperless and digital transactions, which should be supported.”