'I will just see them in court': Remulla tells PhilHealth execs after grilling on policies vs fraud | Inquirer News
Close
menu
search 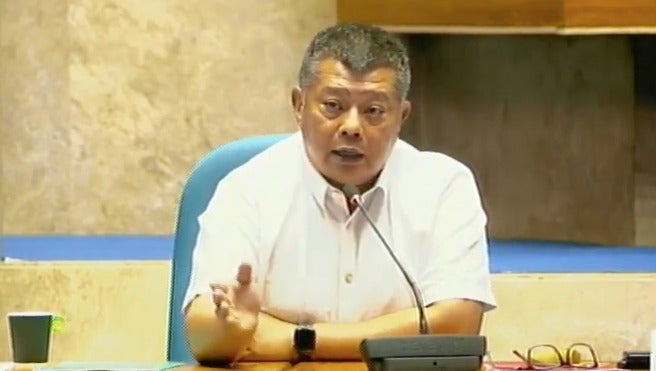 During the House deliberations on the proposed budget of the Department of Health on Friday (Sept 18. 2020), Cavite 7th District Rep. Jesus Crispin Remulla quizzes PhilHealth officials on its policies to address fraud. Screengrab from House of Representatives Youtube livestream

MANILA, Philippines —  “I will just see them in court.”

This was how Cavite 7th District Rep. Jesus Crispin Remulla ended his interpellation during the House deliberations on the proposed budget of the Department of Health (DOH) after being displeased with the answers given by Health Secretary Francisco Duque III on the policies of the Philippine Health Insurance Corp. (PhilHealth) against fraudulent activities.

As the current health secretary, Duque serves as ex-officio chair of the PhilHealth board.

“Ano ang ginagawa niyo pag may fraud na na-commit sa PhilHealth? (What are you doing to address fraud committed against PhilHealth?) What does PhilHealth do? How many hospitals has PhilHealth taken out of its list of accredited hospitals because of fraud? Ilan na? (How many?)” Remulla asked PhilHealth officials.

When no answer was immediately given to the House appropriations panel, Remulla turned to Duque.

“I’ll ask the chairman of the board, what is the attitude of the board and the leadership of PhilHealth sa mga fraud na kino-commit laban sa pera ng taumbayan? (in terms of fraud committed against the taxpayers’ money?) Ano ang ginagwa at ano na ang nagawa? (What are you doing and what have you done?) ” Remulla asked the health chief.

In response, Duque said the PhilHealth board “certainly condemns” all forms of fraud that are being committed by healthcare institutions.

PhilHealth, he also said, has a system that investigates fraudulent acts.

A healthcare institution’s accreditation could either be revoked or it would have to pay up to P100,000 in fine for each fraudulent act, according to Duque.

But Remulla said PhilHealth has supposedly left some hospitals which have committed fraud off the hook.

(We have penalties, there is suspension. Why are there a lot of cases that have been neglected and we just impose a fine, it seems that the hospitals which are committing these infractions are not taking this seriously.)

(Why is PhilHealth’s attitude like this, specifically to hospitals, whose cases have already been decided by the court, we will just impose a small fine. What kind of attitude is that? Are we just letting erring hospitals to get away with this?)

Duque then explained that patients of some hospitals, like those in far-flung areas, would sometimes request that the hospitals just be fined instead of having their accreditation revoked so that service could still continue.

(There are some hospitals, for example, those in far-flung areas where their service is really important, their patients are appealing that instead of suspending that hospital’s accreditation, we could just impose higher fines…)

But Remulla did not let Duque finish and expressed dissatisfaction over the latter’s answer.

“I am not satisfied with the answer…the way that the questions are being answered. I will just see them in court,” he said.