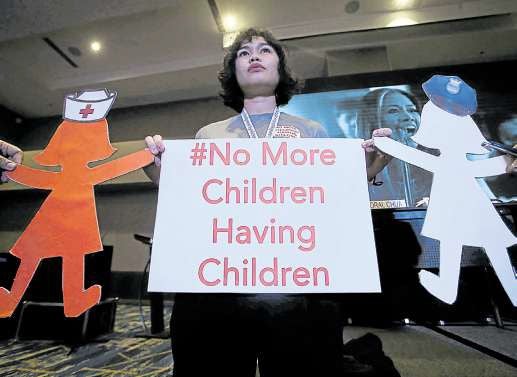 STOP THE EXPLOITATION An advocate campaigns for the creation of a national program that will deal with the alarming number of adolescent and teen pregnancies, in an event held in Quezon City in October 2019. According to the Commission on Population and Development, about 40 to 50 children aged 10
to 14 give birth in the country each year. —LYN RILLON

MANILA, Philippines — The number of children below 15 years old who had gotten pregnant has doubled in 10 years, according to the Commission on Population and Development (PopCom), which is backing a proposed law to raise the age for statutory rape and improvements in “sexuality education” to curb teenage pregnancies.

“It’s the one figure that has been increasing,” Perez said in a Senate budget hearing on Thursday, referring to the age group.

Majority Leader Juan Miguel Zubiri said raising the age of consent in the country from 12 years old to no less than 16 years old could help prevent adolescent pregnancies.

This would mean that those who have sexual relations with minors 16 years old and under will be held liable for statutory rape, he said.

“I am sure the number of teenage pregnancies would go down if we could increase the statutory rape age,” he said.

Perez said he backed Zubiri’s bill and noted that most of the girls aged 10 to 17 year old who got pregnant had partners who were older than them.

“So there’s an element of power play, of exploitation here because it’s older men who are the partners of these young [girls],” he said.

Aside from Zubiri’s bill, there are six proposed measures in the Senate to raise the age for statutory rape to either 16 years old or 18 years old. There are at least seven similar bills in the House of Representatives.

Raising the age for statutory rape “would at least be a barrier or might scare off these predators,” Perez said.

He noted pending bills in Congress to provide comprehensive “sexuality education” to communities and related services.

Perez said the rule prohibiting minors, even those who are already mothers, from accessing family planning services without their parents’ consent had contributed to the increasing number of adolescent births.

The bills could expand the reach of measures to prevent adolescent pregnancy beyond what is allowed under the reproductive health law, he said.

Perez said all minors who gave birth should be considered part of the vulnerable population and given social protection until the age of 25.

Based on studies, minors who get pregnant are unlikely to finish high school and get lower wages, he noted.

He said children of beneficiaries of the conditional cash transfer program would be disqualified from getting benefits if they dropped out of school, as attending school is one of the requirements to stay in the program.

Perez said PopCom had been in talks with the Department of Social Welfare and Development about this matter and had proposed that adolescents with children should be considered a separate family, which could be eligible for the cash aid.