MANILA, Philippines — The Anti-Red Tape Authority (ARTA) on Thursday disclosed that the Bureau of Internal Revenue (BIR) topped its list of “most complained” agencies.

Of the 3,924 complaints it received as of Aug. 31, 2020, ARTA director-general Jeremiah Belgica said 937 complaints were directed to BIR. 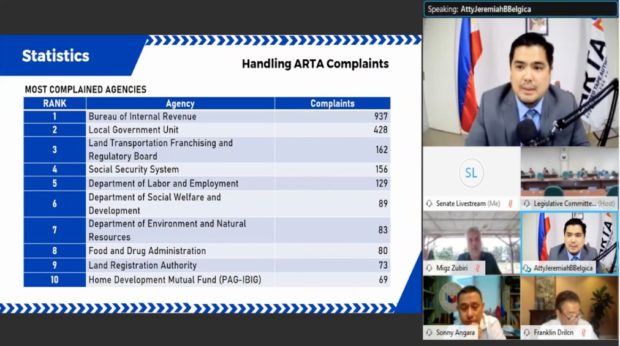 List of most complained agencies to ARTA as presented by its director-general, Jeremaiah Belgica, during the Senate hearing on its proposed budget on Thursday. Screenshot from Senate Youtube

But Belgica noted that agencies with the highest number of complaints are also the ones that frequently transact with the public.

“May mga ahensya po talaga na kapag meron silang for example, 10,000 applications that they are transacting in a month, naturally they would be able to get more complaints,” he said.

(There are agencies that for example process 10,000 applications or transactions in a month, naturally, they would be able to get more complaints.)

“But if you go to other agencies that process business and their clients are industries, madalang po ikaw makakuha ng reklamo sa kanila,” he added.

(But if you go to other agencies that process business and their clients are industries, it is seldom you get complaints from them.)

According to ARTA’s list, trailing BIR was the local government units with 428 complaints, Land Transportation Franchising and Regulatory Board with 162 complaints, Social Security System with 156 complaints, and the Department of Labor and Employment with 129 complaints.