Biden says he trusts vaccines and scientists, not Trump 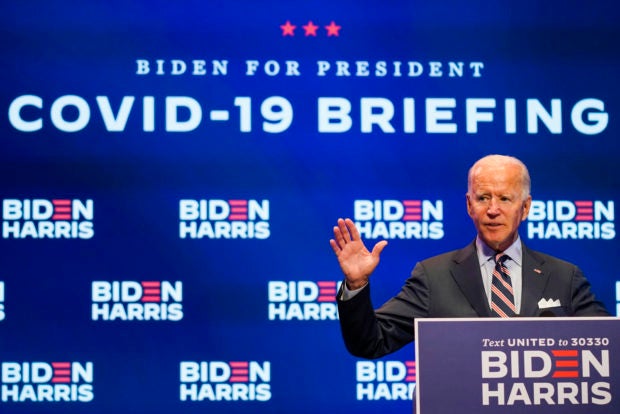 His comments come as the debate over a vaccine — how it will be evaluated and distributed when it’s ready — has taken center stage in the presidential race with seven weeks to go until the November election.

Trump and Biden have been trading accusations that the other is undermining public trust in a potential coronavirus vaccine. Biden has expressed concerns that the vaccine approval process could be politicized, while Trump and his allies counter that such comments from Biden and other Democrats are turning off the public to a potentially lifesaving vaccine when it’s released.

Biden, speaking in Wilmington, Delaware, after being briefed by public health experts about a potential vaccine, cited Trump’s “incompetence and dishonesty” surrounding the distribution of personal protective equipment and coronavirus testing. The U.S. “can’t afford to repeat those fiascos when it comes to a vaccine,” he said.

“I trust vaccines, I trust scientists, but I don’t trust Donald Trump,” Biden said, “and at this moment, the American people can’t, either.”

On Wednesday evening, Trump raised new questions about the administration’s rollout of a vaccine when he publicly contradicted the director of the Centers for Disease Control and Prevention, who said at a congressional hearing earlier Wednesday that a vaccine wouldn’t be broadly available to most Americans until the summer of 2021.

Trump said that CDC Director Robert Redfield had misspoken and that the U.S. could start distributing a vaccine starting in mid-October.

“I think he made a mistake when he said that. I think it’s just incorrect information,” Trump said of Redfield’s comments. “When he said it, I believe he was confused.”

Trump also contradicted Redfield on the use of masks. The CDC director told lawmakers that masks are a more effective means of protection against the coronavirus than a potential vaccine, but Trump said he spoke to Redfield afterward about his comments and that “if you ask him, he’d probably say that he didn’t understand the question.”

“There are a lot of problems with masks,” Trump said.

For his part, Biden has said he would take a vaccine “tomorrow” if it were available but that he would want to “see what the scientists said” first.

His running mate, Kamala Harris, has said she wouldn’t trust Trump to be honest about the safety of any potential vaccine and worries that experts and scientists would be “muzzled” by the president because he’s so eager to get a vaccine approved by his stated goal of Election Day.

The Trump campaign has accused Biden and Harris of sowing doubt about a potential vaccine by expressing concerns that the approval process could be tainted by politics. On Wednesday, Trump said Biden has “started talking negatively” because “they know we have it or we will soon have it, and the answer to that is very soon.”

Biden, meanwhile, responded during his Delaware event to the question of whether his comments could undermine trust in scientists.

“No,” Biden said, because Americans “know (Trump) doesn’t have any respect for scientists.”

He added that the vaccine approval process should be “totally transparent” and evaluated by a “board of scientists” that could give the public an unbiased opinion.

Biden also discussed a vaccine distribution proposal crafted by public health experts and shared with him during his briefing Wednesday. According to the proposal, first responders and those “at the greatest risk” — including those in nursing homes and people with serious preexisting conditions — would get the vaccine first and not necessarily people in minority communities, which have been disproportionately hit by the impacts of the virus.

Biden said that “children, ironically, might be the last people to get the vaccine” because it would take time to safely test the vaccine on them.
“It has to be done fairly and well,” he said of the vaccine distribution. “It can’t be based on your tax returns, figuratively speaking; it’s got to be based on who is most vulnerable.”

Biden also talked about his proposal to instate a national mask mandate, which he says could save tens of thousands of lives. When Biden first proposed it, Trump decried the idea of bringing “the full weight of the federal government on law-abiding Americans” to enforce mask-wearing.

During his event Wednesday, Biden acknowledged that he wasn’t sure if he had the legal authority to sign an executive order imposing a federally mandated nationwide mask mandate, but said he had sought legal advice on the issue.

“Our legal team thinks I can do that, based upon the degree to which there’s a crisis in those states and how bad things are for the

country, and if we don’t do it what happens,” Biden said. He added that, regardless, he would invite governors to the White House and “make the case” to them on the importance of issuing a mask mandate at the state level.