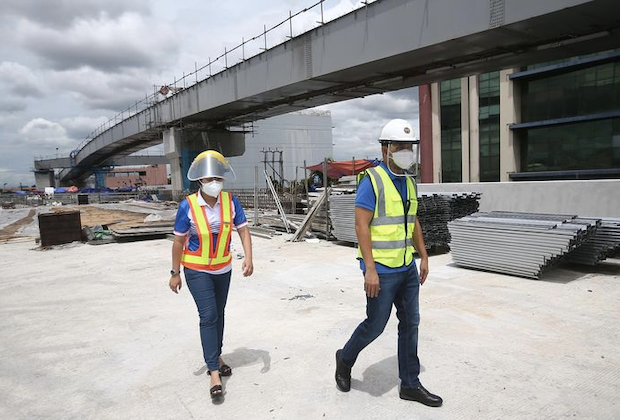 MANILA, Philippines — The portion of the Metro Manila Skyway Stage 3 project that collapsed after a fire in Pandacan, Manila last February has been replaced, Secretary Mark Villar of the Department of Public Works and Highways (DPWH) said in a Facebook post on Wednesday.

According to Villar, the section has been replaced while the contractor, Citra Central Expressway Corp. (CCEC), is rushing to offset the delays in the Stage 3 construction.

“As of latest report, lower and upper coping beams for pier 3, 4, 5 were reconstructed, and deck slab for spans 5 and 6 were completed as well. These were the burned sections from the fire incident,” Villar said in his Facebook post.

“We are intensifying our road right-of-way acquisition so we may soon begin construction at Section 2A. So far, we have acquired 231 out of the 350 lots that need to be acquired with permit to enter,” he added.

A 300-meter portion of the Skyway road collapsed last Feb. 1 after a massive fire struck a San Miguel Yamamura Packaging Corp. warehouse in Pandacan — which sits near the elevated highway that connects Santa Mesa Mesa to Quirino Avenue at the Manila-Makati border.

The fire delayed the opening of the project, which was originally set for April 1. But with the COVID-19 pandemic suspending work, the original three-month extension has reached five months as of September.

Despite the delays, DPWH is optimistic that the project will be finished soon, especially with the Section 1 which spans the Buendia-Quirino-Nagtahan area already 90.67 percent complete; the Section 2A covering Nagtahan-Tomas Claudio at 77.23 percent; and Section 2B or Tomas Claudio-Ramon Magsaysay Avenue at 94.39 percent.

The 18.68 kilometer-long Skyway Stage 3 is meant to shorten travel time between northern and southern portions of Metro Manila, with DPWH expecting to reduce travel time between Buendia to Balintawak from the two hours to only 15 to 20 minutes while accommodating around 55,000 vehicles daily.