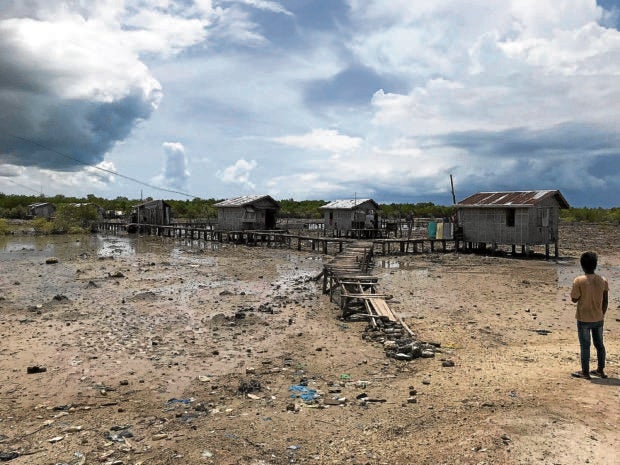 ZAMBOANGA CITY, Zamboanga del Sur, Philippines — Seven years ago, then 18-year-old Nurisma Hasinon survived the ordeal of being a hostage of Moro rebels who laid siege on the city for almost three weeks.

The brutal close-quarter battle in densely populated coastal communities ravaged the home of Hasinon’s family at Barangay Santa Catalina, forcing them to live in an evacuation site.

There, she got married, and now, at 25, is a mother of three. They live in a small shack near the transitory shelter site, the materials she and husband Dennis gathered from dismantled homes.

“Seven years of waiting, I am already tired,” Hasinon said in Chavacano, referring to the permanent housing that the government had promised to provide for the displaced families.

As of June, 1,362 families, or 6,810 individuals, affected by the siege had yet to get permanent homes and considered displaced, according to the Mindanao Displacement Dashboard of the United Nations High Commissioner for Refugees.

For other families, the seven-year wait for a house turned into frustration after they were supposedly removed, or “untagged,” from the list of beneficiaries.

Sitti Raida Birung, 60, said she lost her home to heavy bombardment during the siege and was made to live temporarily at Don Joaquin F. Enriquez Memorial Sports Complex. There, she lost three of her 12 children due to various illnesses.

Two years after staying in the transitory shelter, Birung said her family returned to Barangay Santa Barbara. But their makeshift dwelling caught fire, including documents to show proof of residency in that spot in the village, she said.

“We have no documents to show, that is why we were delisted,” Birung said.

Mary Jane Sakili, 30, who is pregnant with her sixth child, said she and her family felt like outcasts when they got word that they were untagged.

They live in a dilapidated shack at the transitory site in Masepla Phase 1 in Barangay Mampang. To ease crowding in the small space, her husband, Nadjer, a vegetable vendor, sleeps in his pushcart.

“If you are untagged, you don’t have any hope of being given a house,” Sakili said.

She had no idea why they were delisted. “We were just told we are not qualified to get permanent housing,” she said.

Mayor Isabelle Climaco-Salazar denied that the local government was removing displaced families from a list of beneficiaries of permanent housing.

She promised help in asking local officials to look into the complaints.

Maria Socorro Rojas, city social welfare officer, said the families could have been either late in registering as beneficiaries or were not among those displaced during the siege.

Those who qualify but unable to register may still have a chance to get permanent shelters, Rojas assured. 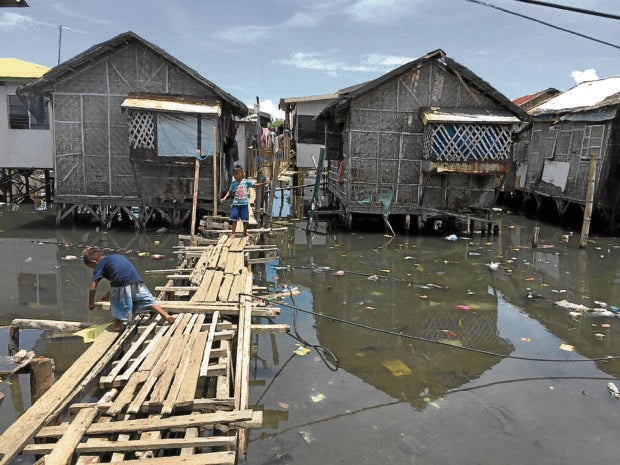 CHILD’S PLAY Children spend part of their day playing in their neighborhood at Buggoc transitory site near Barangay Santa Catalina in Zamboanga City, unmindful of the condition of the community where their families resettled after Moro rebels attacked the city seven years ago. —JULIE S. ALIPALA

Back in 2014, when the local government started accounting for the displaced families, many were discovered to be transients from the provinces of Basilan, Sulu and Tawi-Tawi, and thus not eligible for permanent housing.

They were offered allowances to return to their provinces.

“Issues on safety and the well-being of the people, especially those who are vulnerable to domestic violence and harassment, feel that they continuously live in a place where they are not secure,” Allian said.

“Who are manning the camps and transitory sites now? What happened to the Zamboanga City road map to recovery and reconstruction?” she asked.

She also recalled that due to the “Balik Probinsya” program in 2014, “many were forced to leave” the city.

Salazar said she wanted the transitory sites closed by the end of this month, but the plan would not push through as the shelters had yet to be completed.