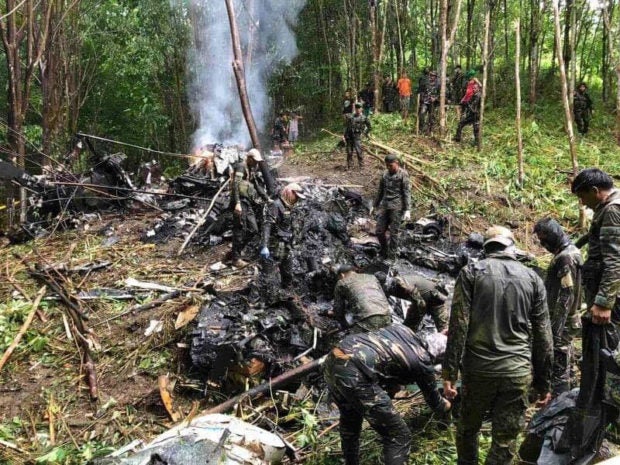 ILL-FATED. Soldiers and rescuers retrieve the bodies of four crew members of an Air Force ambulance helicopter that crashed in a village in Lantawan, Basilan on Wednesday (Sept. 16). The aircraft burned, and its crew members charred beyond recognition. PHOTO BY COL. DOMINGO GOBWAY

ZAMBOANGA CITY—A female pilot, a male co-pilot and two male flight crew members of an Air Force ambulance helicopter were on their way to Jolo, Sulu on Wednesday (Sept. 16) to airlift a blast victim when they flew into bad weather over Basilan province.

The S76 Sikorsky helicopter crashed at the village of Upper Manggas in Lantawan town past 1 p.m.

Maj. Al-Nasser Abdurakman, information officer of the Edwin Andrews Air Base, confirmed that all four on board died in the crash.

“All the bodies have been recovered. As of now, we dont have concrete details as to the cause of the accident,” Abdurakman said.

The S76 is an ambulance helicopter used for humanitarian missions, including search and rescue operations.

Abdurakman said the team left the air base around 12:33 p.m. and were expected to land at the Western Mindanao Command helipad when they got back.

Basilan Gov. Jim Salliman said prior to the crash, a helicopter was seen hovering over Isabela City at a very low altitude.

Salliman said the helicopter could have been battered by strong winds and fell in the town of Lantawan.

“Later, we learned the helicopter had a crash landing,” Salliman added.

Col. Domingo Gobway, commander of Joint Task Force Basilan, told the INQUIRER that the helicopter burned after the crash and the recovered bodies of the crew members were charred beyond recognition.

Gobway said the helicopter, with tail No. 202, belonged to the Air Force’s 505th Search and Rescue Group.

Read Next
Instead of health secretary, Sotto wants finance chief to head PhilHealth board
EDITORS' PICK
Get 80% OFF Ignite 2020 Cyber Tickets starting 28 September
Lakers, Heat start their preparations for NBA Finals
‘Psychic numbing’: When people stop giving a damn about the pandemic
Smart poised to turn PH into ‘Smart 5G country’ with nationwide rollout
Water remains our saving grace right now
Palace slams Facebook over ‘censorship’: ‘Why only take down pages supportive of gov’t?’
MOST READ
‘I offered to resign’ because of endless corruption, says Duterte
Duterte tells Facebook: Why keep operating in PH if you can’t help us?
AMLC investigator says De Lima not involved in Bilibid drug trade
Duterte keeps Metro Manila under GCQ for entire October
Don't miss out on the latest news and information.