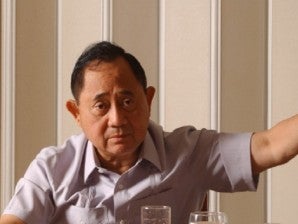 Former Speaker Jose de Venecia testified on Tuesday before the Sandiganbayan that he was surprised at the presence of then Commission on Elections Chairman Benjamin Abalos at a 2006 golf game in Shenzhen, China, in which then President Gloria Macapagal-Arroyo and ZTE Corp. officials were taking part.

De Venecia also said that during the golf game, it was Abalos who was arranging which player would play against whom.

Abalos is being tried for graft for purportedly taking an interest in the scrapped National Broadband Network (NBN) deal between the Philippine government and the Chinese corporation, which was not related to his duties as elections chair. He is in detention in connection with charges of electoral sabotage.

De Venecia testified that the golf game was followed by lunch at the ZTE headquarters. He said it was during lunch that ZTE’s Philippine project was discussed and its officials tried to impress the then President with its new equipment.

ZTE had bagged the $329-million deal to connect Philippine government offices nationwide through broadband technology. But the project, to be funded by a loan, was eventually canceled amid allegations of overpricing, kickbacks and bribery.

Asked by Justice Jose Hernandez of the Sandiganbayan’s Fourth Division why he was surprised to see Abalos, especially since the latter was known as a golfer, De Venecia said he would not have been surprised had he seen the then elections chairman in a golf course in the cities of Baguio and Cebu.

He said he did not know Abalos was going to be in Shenzhen for the golf game, or that the Philippine group was to be hosted by ZTE in Shenzhen.

He confirmed that a group picture that included Arroyo, her husband Jose Miguel “Mike” Arroyo, Abalos and himself, and that was printed in his biography, was taken during the golf game. He observed that the Malacañang Press Corps, which usually tailed Arroyo during her overseas trips, was not present then.

De Venecia testified that he and his wife, now Pangasinan Reresentative Gina de Venecia, were vacationing in Hong Kong during the All Saints’ Day break in 2006 when he received a call from Arroyo, who was in the area.

Per his testimony, the then President invited him to a round of golf but did not say where it would be held. He and his wife went to meet Arroyo at her hotel and joined her in the coaster that was to take them to the venue. Mike Arroyo was also with them.

It was only when they were en route that Arroyo told him that their destination was Shenzhen, De Venecia said. He said that at the golf course, he and the other members of the group met with Abalos, ZTE executives, and an official of the local government of Shenzhen.

Abalos’ presence “was one of the surprises I experienced,” De Venecia said.

He said the first surprise was the fact that the golf game was to be held in Shenzhen, as he had thought the venue would be in Kowloon or any of the New Territories in Hong Kong.

“The second surprise [was] we saw Chairman Abalos there,” he said, but went on to describe the latter as a good friend and a well-known golfer.

After the golf game, lunch followed at the ZTE headquarters in Shenzhen at which Abalos, the Arroyos and ZTE officials were present, De Venecia said.

The ZTE executives gave the Philippine officials a guided tour of the place, and told them that the corporation was at the forefront of telecommunications development, he said. He added that Abalos also tried to strike up conversations between the hosts and the guests, including Arroyo.

“ZTE officials were obviously trying to impress the leader of the Philippines because they were going to introduce new equipment and facilities in [information technology] for consideration of the Philippines,” De Venecia said.

During the lunch, a banker from China whose name De Venecia said he could not remember also said that his bank would be willing to provide funding to “ZTE’s project in the Philippines.”

However, De Venecia said, Arroyo told him that she preferred a build-operate-transfer (BOT) project which would be at no cost to the government.

De Venecia also said that before the golf game, he was aware that his son—Jose “Joey” de Venecia III, a losing bidder for the NBN project—had wanted to submit a proposal to the government for a nationwide telecommunications network. The project would have been under the BOT scheme.

He said that he thought it was a good idea, and that he said as much to his son.

Asked if he discussed the project with Arroyo in Shenzhen, De Venecia said it was she who brought up the matter and told him that his son’s proposal was a good one.

Recently, another graft case was filed against Abalos, the Arroyos and former Transportation Secretary Leandro Mendoza also in connection with the NBN deal.