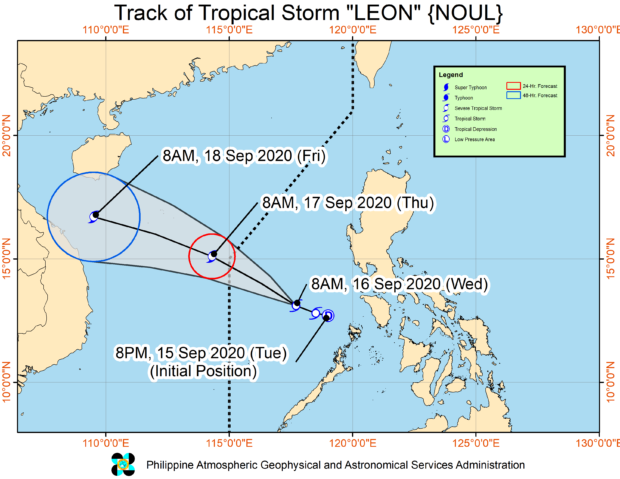 MANILA, Philippines — Tropical Storm Leon continues to move away from the country’s landmass, but rains will continue to pour in some parts of Central and Southern Luzon as the cyclone strengthens the effects of the southwest monsoon or habagat.

The latest updates from the Philippine Atmospheric, Geophysical, and Astronomical Services Administration (Pagasa) on Wednesday afternoon showed that Leon is now at 405 kilometers west-northwest of Coron, Palawan.

All Tropical Cyclone Wind Signals have been reduced, but Pagasa warned that occasional to moderate and heavy rains would still be experienced in the affected areas, including Metro Manila, and parts of Visayas and Mindanao, this coming Thursday.

(Tropical Storm no longer has a direct effect on the country, but it would continue to enhance the southwest monsoon, which would bring cloudy skies and rains over a large part of the country.)

(We should expect occasional up to sometimes heavy rainfall here in Metro Manila, Central, and Southern Luzon, and for Visayas and Mindanao tonight.)

Leon is expected to exit the Philippine area of responsibility by Thursday morning, leaving through the West Philippine Sea.

Because of the monsoon rains and cloudy skies, temperatures in Luzon would be slightly lower than usual, ranging from 24 to 32 degrees in Metro Manila, 24 to 31 degrees in Puerto Princesa, Kalayaan Islands, and Legazpi.

The same scenario would occur in Visayas and Mindanao, with daytime temperatures peaking only to 31 degrees Celsius in Iloilo and Cebu; 25 to 32 degrees in Davao while Zamboanga will be colder with 23 to 29 degrees.

As of now, a gale warning is still in place over the waters off Zambales, Bataan, western coast of Palawan including Kalayaan Islands, Oriental Mindoro, and Lubang Island.  This means that fisherfolk and seafarers with small boats should refrain from sailing as sea waters may get rough.

Meanwhile, sea conditions on the northern and eastern seaboards of Luzon, eastern waters of Visayas, and seas west of Mindanao, would be moderate to rough due to the effects of Leon and the southwest monsoon.  The rest of the country meanwhile would see a moderate condition.