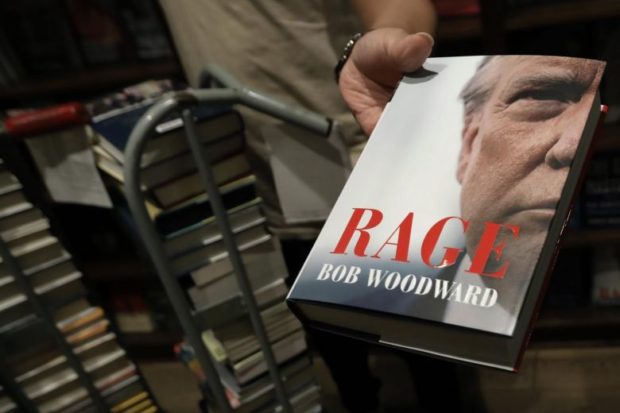 WASHINGTON — The letters which North Korean leader Kim Jong Un and United States President Donald Trump exchanged before and after their meetings in 2018 and 2019 were effusive in their praise of each other, investigative journalist Bob Woodward wrote in a book released on Tuesday (Sept 15).

Mr Kim’s letters were masterpieces of verbose flattery that bordered on romantic prose, wrote Mr Woodward, a veteran reporter most known for his reporting on the Watergate scandal that eventually led to US President Richard Nixon’s resignation in 1974.

Rage, his second book on the Trump presidency, was based on 18 interviews with Mr Trump. He was shown 27 letters between Mr Trump and Mr Kim, 25 of which had not been reported on before.

The new details on the letters offered fresh insights on the bond between the two leaders at the time which provided the momentum for US-North Korea diplomacy. Progress has since stalled, with critics then and now arguing that the leaders’ three meetings were flashy but of little substance.

“Florid and grandiloquent, they trace how the two forged a personal and emotional bond,” wrote Mr Woodward.

“Trump has personally said they are ‘love letters’. They are more than that – they reveal a decision by both to become friends. Whether genuine or not, probably only history will tell.”

US intelligence analysts could not conclude who penned the letters that came from Mr Kim, but they “marveled at the skill someone brought to finding the exact mixture of flattery while appealing to Trump’s sense of grandiosity and being centerstage in history”, wrote Mr Woodward.

The Singapore Summit on June 12, 2018, was crucial, Mr Trump told Mr Woodward. “We really got along. It was a great chemistry.”

In a Christmas letter half a year after the summit, Mr Kim described the meeting as “reminiscent of a scene from a fantasy film”.

He wrote: “Even now I cannot forget that moment of history when I firmly held Your Excellency’s hand at the beautiful and sacred location as the whole world watched with great interest and hope to relive the honor of that day.”

Mr Woodward observed that the two leaders often portrayed their diplomatic relations as an us-against-the-world effort, as they discussed the give-and-take of denuclearization.

At least twice after the Singapore Summit, Mr Trump told Mr Kim in letters that they were the only ones who could end the hostility between their countries, lauding their “unique style and a special friendship” and pledging that Mr Kim would always be his friend.

After their third meeting, an impromptu but historic summit at the border of North Korea and South Korea on June 30 last year, Mr Trump sent a letter to Mr Kim, praising him and the success of the meeting.

He attached a copy of the front page of The New York Times, which featured a large picture of the two leaders, and wrote in marker: “Chairman, great picture of you, big time.”

But by the time Mr Kim replied more than a month later on Aug 5, relations appeared to have cooled, with the North Korean leader upset that US-South Korea military exercises had not fully stopped.

In this letter, Mr Kim was polite but “sounded like a disappointed friend or lover”, wrote Mr Woodward.

Weighing in on the Trump-Kim relationship on Tuesday, Mr Woodward remarked on “the nature of how they talked and how they leaned on each other and how they maintained they were friends and trusted each other”.

It was an interesting, original experiment in diplomacy, he said at a virtual event hosted by the Washington Post, where he is an associate editor.

“They did charm each other,” he said. “Trump felt very much that it worked, we didn’t have war. You have to give him credit, at this point there’s been no war.”

He added: “We don’t know where this is going to go. The relationship between Trump and Kim Jong Un is not good now, there’s a lot of tension, so we will watch that.”

Mr Woodward also noted that in his interview with Mr Trump on the Singapore Summit, he had to bring the president’s focus away from the public relations extravaganza to the substance of the meeting.

Mr Trump recounted that he was deeply impressed by the wall of cameras when he first met and shook hands with Mr Kim at the Capella Hotel on Sentosa Island, Mr Woodward wrote.

He claimed it was among the largest number of cameras he had seen in his life, even more than at the Academy Awards in Hollywood.

“You know, it was the most cameras. I think I’ve seen more cameras than any human being in history. There’s like hundreds of them. It’s free. I get it for free. It costs me nothing. It’s called earned media,” said Mr Trump.