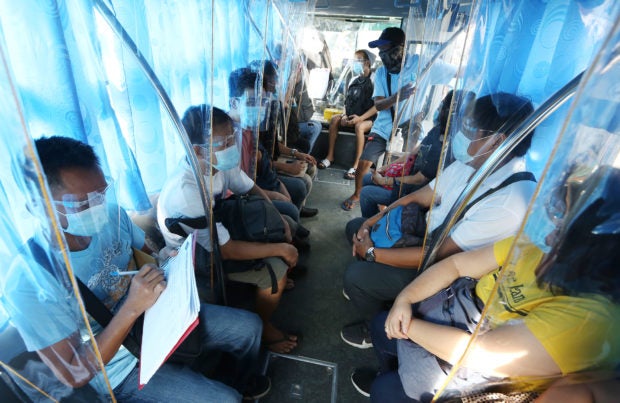 MIND THE GAP Passengers aboard this new minibus on the Roces-Cubao, Quezon City, route, keep their 0.7-meter distance from each other following the new rules set by the Department of Transportation. The new regulation reduces the distance between passengers from the previous 1 meter to contain the spread of the new coronavirus.—NIÑO JESUS ORBETA

MANILA, Philippines — Top officials on Tuesday publicly disagreed with each other on easing physical distancing rules on public transportation, with more arguing that it was key to reviving the economy and a few warning that it could further spread COVID-19 infections.

President Rodrigo Duterte would resolve the dispute if the Inter-Agency Task Force for the Management of Emerging Infectious Diseases (IATF) could not settle the disagreement, according to presidential spokesperson Harry Roque.

The President asked the IATF, the temporary government body in charge of the administration’s response to the pandemic, to give him a visual report on the effects of reducing physical distance so he could understand it more easily.

Transportation Secretary Arthur Tugade told the House of Representatives on Tuesday that the rules to reduce physical distance between passengers on mass transport was “a product of research.” But Interior Secretary Eduardo Año said in a radio interview the local medical experts were not consulted and the new regulations had not been approved and should be rescinded.

At a press briefing on Tuesday, Roque insisted that the IATF last week approved the new measure after the National Economic and Development Authority presented data on how “you cannot open the economy without increasing access to public transportation.”

He maintained that no one objected to the new rules, whose implementation was left to the Department of Transportation (DOTr).

The dispute among the officials broke out on Monday night during a meeting of the President and some Cabinet officials in the IATF. The meeting was aired on national television on Tuesday morning.

Health Secretary Francisco Duque III cited a study by the Health Professionals Alliance Against COVID-19, which warned that reducing physical distancing on public transportation might result in 686 daily infections in Metro Manila and increase the number of deaths.

Año, who recently recovered from a second COVID-19 infection, sided with Duque and the health experts.

Participating in the meeting with the President through videoconference, Año said the wearing of face shields and face masks only mitigated the risks, but the key factor in decreasing transmission was the 1-meter physical distance.

He said it would be “dangerous” to reduce the distance to 0.75 meter, then to 0.5 meter and later to 0.3 meter, which the DOTr started to implement on Monday.

“I agree with our health sector that this will start another spike, and it will be a roller coaster and we will be back to where we started. We might return to enhanced community quarantine,” Año said.

At the House of Representatives, Tugade defended the new rules, saying the Philippines was not alone in taking measures to relax restrictions on mobility.

“With the reduction of social distancing, we can ensure that the matter of health and safety is not prejudiced provided you do strict enforcement and recognition of face masks, face shields, washing of hands … and no entry of senior citizens,” he said.

“It is not a product of a knee-jerk reaction but also a product of research,” he added, without elaborating on who conducted it and what were its findings.

Tugade said the gradual easing of the 1-meter rule “does not mean people will crowd together.” Based on the department’s projections, he said, only one to four passengers would be added to the regular capacity of jeepneys and buses, while only a few dozens will be added to trains.

Some 18,000 of the 41,986 jeepneys in Metro Manila, or 43 percent, were already back on the streets, according to Land Transportation Franchising and Regulatory Board Chair Martin Delgra.

Public interest groups Action for Economic Reforms (AER) and Move As One Coalition said that the “public clamor” was for more public transportation, not the reduction of the physical distance between passengers.

“There is a need to address the lack of available public transport by allowing more public utility vehicles to operate and providing safe alternative transport options, rather than loosening our safety guidelines,” AER said in a statement.

More investments in public transport, such as open-air jeepneys, could deliver safe travel options for the riding public, according to Move As One Coalition.

Carlito Galvez Jr., chief implementer of the National Task Force (NTF) COVID-19, said easing physical distancing on mass transport was an issue of “risk management” which could be achieved by ensuring proper ventilation and banning talking, eating and the use of cell phones.

“Too much risk aversion is not good” for the country, he said.

“Other countries are evolving. We might be the only country left that is very stringent about the 1-meter distance,” Galvez said.

Defense Secretary Delfin Lorenzana, chair of the NTF COVID-19, backed the transportation department on condition that the “seven commandments” of avoiding new coronavirus were strictly observed.

—With reports from Mariejo S. Ramos, Jeannette I. Andrade and Nestor Corrales