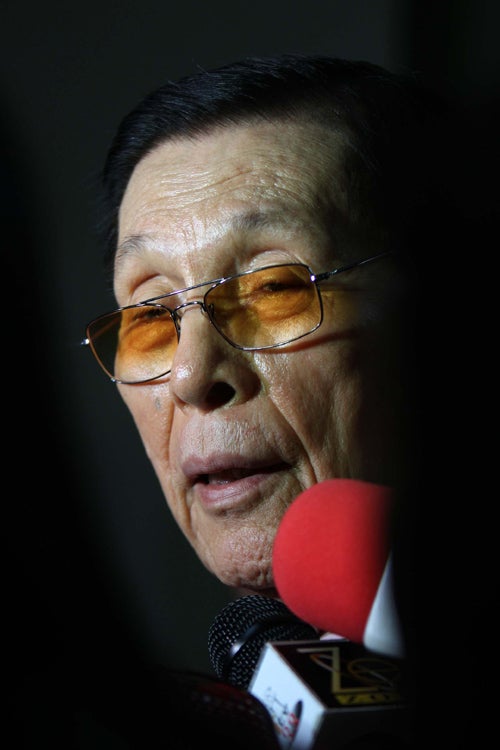 A “vaguely” written and formulated accusation that Chief Justice Renato Corona had amassed ill-gotten wealth put the Senate impeachment court in a “quandary” Tuesday on whether to admit the prosecution evidence.

Senate President Juan Ponce Enrile, the presiding officer, noted that Article 2 of the impeachment complaint had been  “expanded” by the prosecution from its original allegation that Corona committed culpable violation of the Constitution and betrayed the public trust by supposedly failing to disclose his statements of assets, liabilities and net worth (SALNs).

“We are at a quandary as to how to treat this article,” Enrile told Representative Niel Tupas Jr., the lead prosecutor.

The unresolved objection of the defense against evidence on alleged ill-gotten wealth embodied in Article 2 set off yet another exchange with the prosecution on the fifth day of the impeachment trial.

Defense counsels on Tuesday filed a motion seeking to prevent Internal Revenue Commissioner Kim Jacinto-Henares from testifying in the impeachment court and producing the income tax returns (ITRs) of Corona and his family.

“The presentation of the ITRs and tax certificates of the Corona children should not be allowed for being without basis, irrelevant, and immaterial to these proceedings,” Corona’s lawyers said in a six-page motion.

“The testimony of Commissioner Henares on the ITRs and tax certificates of the Corona children, as well as the presentation thereof, are therefore irrelevant and immaterial to the issue of whether or not CJ Corona failed to disclose his SALN to the public,” they stressed.

In a 21-page memorandum submitted yesterday, the defense led by former Supreme Court Associate Justice Serafin Cuevas asked the court to prevent the prosecution from offering as evidence documents and testimonies of properties under Corona’s name.

The defense maintained that the prosecution was injecting an entirely new charge into Article 2.

The memorandum said that the prosecution’s failure to include the new allegations in Article 2 showed the complainants’ “lack of any personal knowledge at the time they filed the verified complaint of the ultimate facts concerning suggestions of graft and corruption and accumulation of ill-gotten wealth.”

“Complainants did not base their charges on their personal knowledge, much less on authentic documents, at the time they filed the verified complaint,” it said.

“This now explains their desperate and belated use of this honorable court’s subpoena power to gather evidence for the very first time to prove their case. Unfortunately, and to CJ Corona’s extreme prejudice, these proceedings have become an illegal ‘fishing expedition.’ This should never be allowed.”

Defense lawyers asked the court to “expunge from the record any and all of the evidence presented” by the prosecution regarding his alleged properties. Under Article 2, he is also “suspected and accused of having accumulated ill-gotten wealth, acquiring assets of high values and keeping bank accounts with huge deposits.”

Said Corona’s camp: “To allow complainants to present evidence on matters not covered by the clear language of Article 2 will violate (his) constitutional right to due process and to be properly informed of the charges against him.”

“The use of particular words like ‘suspected,’ ‘reported’ and ‘accused,’ without more, conveys no specific allegation of every necessary circumstance and fact to constitute graft and corruption or accumulation of ill-gotten wealth,” the defense argued.

“In other words, the mere suspicion that the respondent ‘accumulated ill-gotten wealth, acquiring assets of high values and keeping bank accounts with huge deposits’ is insufficient.”

During yesterday’s hearing, Tupas argued that charges of ill-gotten wealth had been “sufficiently alleged” in Article 2. He cited a ruling that “the allegation is sufficient if it contains sufficient notice of the cause of action even if the allegations may be vague or indefinite.”

“The allegation in the complaint is sufficient if it informs the respondent of the accusations against him,” he told the court. “Even the ordinary person understands when he reads the complaint.”

Enrile gave prosecutors a non-extendable deadline at 10 a.m. Wednesday to submit their legal memorandum on the issues arising from Article 2.

Tupas also noted that Corona had addressed the issue of his alleged ill-gotten wealth when he “flatly denied” the accusation in his official reply to the articles of impeachment.

“It means that the Chief Justice understood that we in Congress, all 188 of us who signed the impeachment complaint, are accusing him of amassing ill-gotten wealth,” he said in Filipino. “Using the sufficiency test, it suffices.”

Cuevas said Corona should not be faulted for denying the charge even as he maintained that it did not form part of the complaint.

“We said this should not be considered, but we also did not want to appear rude,” he said. “It is not the answer, it is not the rejoinder that determines the existence of an impeachable offense … Why will the reply supply the deficiency in the complaint?”

Cuevas also complained about the prosecution’s releases in press conferences of documents such as SALNs and land titles as supposed proof that Corona had accumulated ill-gotten wealth.

He said such documents had not been offered as evidence in the impeachment court and might even be “rejected or overruled” if they would be presented as such.

“Yet they are feasting on them outside, saying that our client has so many properties,” he said in Filipino.

During the hearing, Tupas complained that Enrile was conducting the proceedings “like a criminal trial.” Sounding nervous, he pleaded that Enrile be “more liberal … so the truth will come out.” He said that in two hearings last week, “rules of evidence … that should be suppletorily applied actually became the controlling rules.”

“There were at least 30 objections from the defense and the prosecution had to reform its questions at least 20 times,” Tupas said.

Tupas said no to all these questions and pleaded, “Just give us flexibility.”

Enrile then chastised Tupas for the unpreparedness of the prosecution. Enrile said he had assumed that the prosecutors, after delivering the articles of impeachment on December 13, would have “assembled and marshaled” evidence for each article.

Appearing for the first time in the hearing after suffering hypertension, Senator Miriam Santiago challenged the two parties to define the standard of proof that must be observed in deciding the case which was another area of conflict between the defense and prosecution panels.

Tupas replied that standard of proof should be “substantial evidence” while Cuevas said proof must be “beyond reasonable doubt.”

In simple cases of libel or malicious mischief,  Cuevas said the penalty was less than six months imprisonment.

“What more in an impeachment trial where the penalty is very severe? Perpetual absolute disqualification from public office is practically a death sentence! It is not temporary. I submit that proof should be beyond reasonable doubt. Why would quantum of evidence be lesser than that of a simple case of estafa or libel,” he added.

Santiago said the “polar differences” in the answers of both counsel “can only be resolved in caucus.”

Enrile later urged the impeachment court to express its observations whether he had indeed been overtly strict as presiding officer. He also said he was “open” to surrendering his post “to anyone who wants to replace me.”

“I am not siding with anyone in this case.  I will not be an instrument of anyone here and I will not issue a decision that would not be just,” he said. “I will not allow this court to be used. As the presiding officer, I will make sure there will be no unjust or unreasonable system here.”

“If we suppress evidence, it is the people who will lose. In a criminal case, at least there is double jeopardy. Not so in an impeachment trial. All they have to do is file (another impeachment complaint) next year and we’ll do it again,” Cayetano warned. “So if we convict or we acquit, let it be based on the merits,” he added.

In a post-trial press conference, prosecution spokespersons assailed the defense for turning the impeachment trial into a criminal proceeding.

“It’s definitely a sad day for us because technicality prevails over merit,” said Marikina Representative Romero Quimbo. “The defense will put every roadblock to stop the presentation of evidence.”

Defense lawyers assailed the prosecution for resorting to “mob rule.”

“It appears that the prosecutors want to end this after just four days of trial. If that’s what they want to do, then why don’t we just let the man stand and hit him with stones just like what they did in the old times,” said Tranquil Salvador III.

“We cannot allow rules without having standards which could turn (the trial) into a circus,” said Karen Jimeno. “We cannot let anybody ask any question and accuse a person without a process and a system.” With reports from Marlon Ramos and Cynthia D. Balana