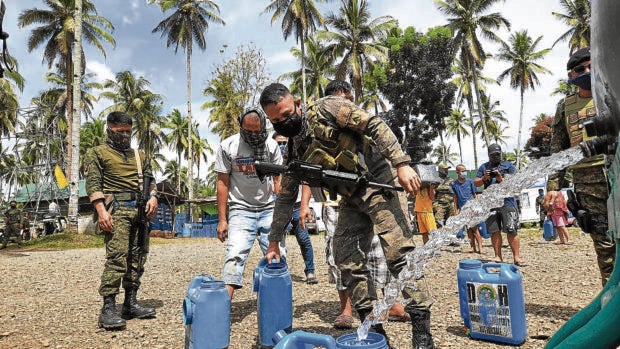 MANILA, Philippines — The barangays that will receive funds from the proposed P16 billion development project for communities cleared of insurgency will not be allowed to deviate the funds from the menu of programs specified by the government, Interior Secretary Eduardo Año said Monday.

Año issued this remark when asked in an ABS-CBN News Channel interview if the funds can be used by barangays for other initiatives against insurgency, including propaganda campaigns against communist rebels.

“No, they cannot do that. There is a specific menu for projects: farm-to-market roads, water and sanitation system, agriculture and livelihood and technical vocational training for the barangay people. These are specifics. You cannot do other things other than specified in the menu,” he said.

Asked if the budget can be used for intelligence funds, Año replied: “No, definitely not.”

During a House hearing on the budget proposal of the Department of the Interior and Local Government for 2021, Año said a total of 822 villages which were affected by insurgencies due to lack of social services and programs from the national government will benefit from the said project of the National Task Force to End Local Communist Armed Conflict.

He denied that the proposed budget for the program is a form of “pork barrel”.

“This is not a pork barrel or lump sum because projects are itemized and there will be strict monitoring and evaluation of these projects,” he said.